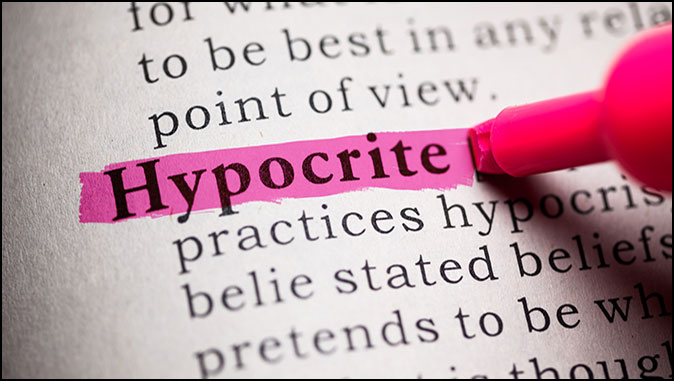 “For what is the hope of the hypocrite, though he hath gained, when God taketh away his soul?” – Job 27:8

I’ve often wondered about actors and actresses. Do they really know who they are? So often they will play a role of a person of high moral standards and integrity, but in reality, their own lifestyle is very different. The other side of that is when a Christian who is an actor or actress uses words and actions in a movie that deny their faith, how will God judge them? “It’s just a role”, they say, “It was the character who said the words and lived that lifestyle, not me.” I don’t see things that way. How can you justify pretending to be what you aren’t? Which is the pretend role? The one where you say you’re a Christian, or the one on stage that others see? “For what shall it profit a man, he shall gain the whole world and lose his own soul?” Mark 8:36. The word “hypocrite” is used many times in Scripture, and never as a compliment. In Hebrew the word is “hanep” and means “hypocritical, godless, profane, hypocrite, irreligious”. It denotes someone who acts pious as if they honor God, but their true character is just the opposite. It’s first used in Job by one of his “friends” who calls him a hypocrite”. In the first chapter of Job, we meet a man who is very religious…he goes through all the right rituals to show his godliness. “There was a man in the land of Uz, whose name was Job; and that man was perfect and upright, and one that feared God, and eschewed evil.” Job 1:1. That sounds like a decent man. He had seven sons, three daughters, and much wealth. The sons and daughters liked to party together, and Job would call them after their party to sanctify them and offer burnt sacrifices for them “It may be that my sons have sinned, and cursed God in their hearts. Thus did Job continually.” Job 1:5b. It seems as if Job had a true heart to honor God, but that always makes Satan unhappy and those who try to do right in the eyes of the Lord become a target. So, it was for Job. Satan asked God for permission to test Job and God allowed it. Satan put Job through a very rough time. Job lost his wealth, and his sons and daughters all died in one day. “Then Job arose, and rent his mantle, and shaved his head, and fell down upon the ground, and worshipped, and said, Naked came I out of my mother’s womb, and naked shall I return thither: the LORD gave and the LORD hath taken away; blessed be the name of the LORD.” Job 1:20-21. Job seems like a very decent man who was a victim of Satan’s hatred. “In all this Job sinned not, nor charged God foolishly.” Job 1:22. How many times have you heard people, even Christians, blame God for their ill health, or the death of a loved one? Have you ever blamed God for bad things that happen? There’s a big difference between God allowing things to happen and God making them happen. Everyone has trials and testing, but we need to honestly love God through it all.

Satan wasn’t done with his evil toward Job. Job’s health failed and he was covered in boils. At this point, even Job’s wife began to mock his faith “Then said his wife unto him, Dost thou still retain thine integrity? Curse God, and die.” Job 2:9. Job’s wife mocked him for remaining faithful to God and thought it would be better if he turned against God and died. It seems as if she was used of Satan to cause Job more suffering. The same is true of some of his friends who heard of his trouble and came to visit him. “…for they had made an appointment together to come to mourn with him and to comfort Him.” Job 2:11b. They brought more hurt and sorrow to Job, rather than comfort. They were Eliphaz the Temanite, Bildad the Shuhite, and Zophar the Naamathite. Each man took his turn at explaining to Job just how bad of a person he was, and why he deserved all the troubles he faced. By the time they came to visit, Job was already feeling that death would be the only answer to his sorrows. Eliphaz spoke first and chided Job about encouraging others in their time of trials, but now that he was facing troubles, he was losing heart. Eliphaz pointed out that nobody who was innocent ever perished. Eliphaz accused Job of doing many ungodly things. Eliphaz didn’t cheer Job up at all, and made him more depressed. Then Bildad had a go. He pointed out that Job wasn’t as good and upright as he thought himself to be because God would protect him from the troubles if he were. Nowhere in Scripture do we find that people who love and honor God are exempt from trials and tribulations. In chapter 1 we saw that Job loved God and cared deeply about his children’s welfare, but Satan destroyed everything. Bildad was very pointed in telling Job that he was only acting as if he had faith and that he deserved all of the troubles and heartache he had been suffering through. “Can the rush grow up without mire? Can the flag grow without water? Wilst it is yet in his greenness, and not cut down, it withereth before any other herb. So are the paths of all that forget God; and the hypocrite’s home shall perish:” Job 8:11-13. Does Job seem like a hypocrite? Was he just acting as if he honored God? Only God truly knew Job’s heart, but his friends judged him as a man who was just acting a part and not truly believing what he professed.

The pounding Job received from his friends caused him to look at his life. Were they right? Should he curse God and die, as his wife suggested? What Job found out about himself is that he trusted God. “Hold your peace, let me alone, that I may speak, and let come on me what will. Wherefore do I take my flesh in my teeth, and put my life in mine hand? Though he slay me, yet will I trust in him: but I will maintain mine own ways before him. He also shall be my salvation: for an hypocrite shall not come before him.” Job 13:13-16. Job was confident that he wasn’t a hypocrite and that even if God allowed him to die, he would trust in the Lord and keep serving Him as he always had.

As Christians, we need to be sure the faith we profess with our mouth isn’t hypocritical. Do you sacrifice an hour on Sunday morning to sit in a pew as a show to others? When you get home, what do you watch on television or google on the internet? Do your children hear you cussing and criticizing others? Jesus talked about criticizing others while ignoring our own shortcomings. “Thou hypocrite, first cast out the beam out of thine own eye; and then shalt thou see clearly to cast out the mote out of thy brother’s eye.” Matthew 7:5. In Greek the word “hypokrites” is translated hypocrite, and is an actor, stage player, a pretender. Are you acting like a Christian with no honesty in your faith? Do you go through the motions, with no conviction in your heart? If so, then stop acting like a Christian and be one. Let Jesus into your heart and let Him rule your words and actions.

What is a Christian? The Apostle Paul said “That if thou shalt confess with thy mouth the Lord Jesus, and shalt believe in thine heart that God hath raised him from the dead, thou shalt be saved.” Romans 10:9. You may have said the right words but God knows if you truly meant them. People around you will judge your Christian faith by how you behave…your actions and words. Every non-believer is an expert on how Christians should behave. They judge us more harshly than God does. Our righteousness is through Jesus, not our own righteousness. God has forgiven our sins, but our actions can stumble people who have no faith or little faith. Believe in the Lord Jesus Christ and surrender your life to Him. Honor Him with all you do. Our life should be a testimony of our salvation, so if you’re a hypocrite and say “I’m a Christian”, but act in a different way, then which is the truth? If you’re acting as if you serve Christ then you’re just pretending you’re a Christian. Stop acting, take up your cross, and be a true follower of Christ. Give your heart to Christ and glorify Him in all you do. Stop acting.

Born Again Christians know that we are no better than other sinners, but we are sinners saved by grace. “For by grace are ye saved through faith; And that not of yourselves: it is the gift of God: Not of works lest any man should boast. For we are his workmanship, created in Christ Jesus unto Good works, which God hath before ordained that we should walk in them.” Ephesians 2:8-10. Because the grace of God has brought salvation, that grace needs to rule our life. “But wilt thou know, O vain man, that faith without works is dead?… For as the body without spirit is dead so faith without works is dead” James 2:20 & 26. If you think good works make you a Christian, and you haven’t truly given your heart to Christ, you’re just acting like a Christian and your works are all wood, hay, and stubble which will be burned on the day you stand before Christ. Job’s friends saw him as a man who was going through the motions of faith, but not truly loving God. “For the congregation of hypocrites shall be desolate, and fire shall consume the tabernacles of bribery. They conceive mischief, and bring forth vanity, and their belly prepareth deceit.” Job 15:34-35. Eliphaz just couldn’t stop calling Job a hypocrite. I wonder how Job acted to make his friends see a hypocrite rather than a man who loved God. What do your friends see in you? An actor…a hypocrite? Or someone who truly loves Jesus with all your heart, all your soul, and all your strength? If you sit in a pew on Sunday and act like a Christian but come Monday you act like the world, which act shows your heart? Living for Jesus or living for the world? What jokes do you laugh at? What words do you use? What movies do you watch? Stop embracing a worldly life and truly give your life to Christ.

People around you are watching. Your children, your friends, and your family have heard you profess Christ with your mouth, but do they see your actions and hear your words and perceive you to be a hypocrite? If so, it’s time to stop acting like a Christian and be one.