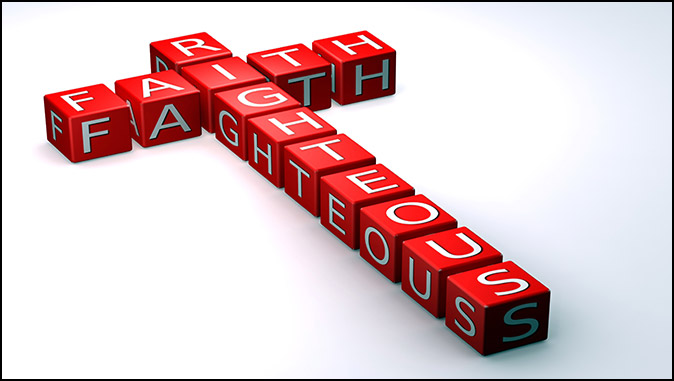 Righteousness Through Christ
By Nathele Graham

It’s so easy to see the sins and shortcomings of other people. If someone who professes to be a Christian doesn’t live up to our standards, we question their commitment to Christ. All the while we go along, judging others and falling short of perfection in our own lives. Make no mistake, as Christians we are to strive to rise above sin, but as Christians we are assured forgiveness through Christ when we earnestly repent and ask Jesus for forgiveness. We need to listen to the urging of the Holy Spirit and recognize sin in our life, and repent before pointing fingers at others. If we spend too much time judging the failures of others, we can become so filled with pride, that we feel qualified to judge others.

How do we know what is and isn’t sin. We can start in the Old Testament and look at the Law of Moses.

“Wherefore the law was our schoolmaster to bring us unto Christ, that we might be justified by faith. But after that faith is come, we are no longer under a schoolmaster.” – Galatians 3:24-25.

The Law was a schoolmaster and shows us how God feels about how we live. Christians need to study it to understand sin and see just how blessed we are that Jesus took our punishment. By human standards we are pretty good people, but the Law exposes us as lost sinners in need of God’s grace. Through faith in Christ our sins are forgiven. That doesn’t mean we are to continue in our sins so God has the privilege to forgive us more. A beautiful example of the Law vs. Grace, is found in John chapter 8. The Scribes and Pharisees were continually trying to trap Jesus. One day they brought a woman to Him who had committed a crime punishable by death under the Law.

“And the scribes and Pharisees brought unto him a woman taken in adultery; and when they had set her in the midst, they say unto him, Master, this woman was taken in adultery, in the very act. Now Moses in the law commanded us, that such should be stoned: but what sayest thou?” – John 8:3-5.

The Law did say she should be stoned, but it also said the man was to be stoned too. These Scribes and Pharisees seem to have had selective morals. How many who read this are guilty of such a sin? God has very strong feelings against sexual sin. Homosexuality is also punishable by stoning, and Jesus taught us that if a man looks upon a woman with lust, he has committed a sin. The only acceptable sexual relations is within a one man/one woman marriage. The woman who was brought to Jesus for condemnation must have been very repentant; she knew the Law condemned her, and she had been caught in sin and was worthy of death. What did Jesus do? Did He condemn her? He bent down and wrote with is finger on the ground.

“So when they continued asking him, he lifted up himself, and said unto them, He that is without sin among you, let him first cast a stone at her.” – John 8:7.

The next time you gossip with a friend about someone, remember Jesus’ words. Gossip is a sin, and so you aren’t worthy to condemn others. Everybody sins, so we become numb to our own sin. By human standards, our own sin isn’t so bad. Use Jesus as your standard of behavior rather than sinners who are imperfect. Look at how Jesus handled the situation. Instead of condemning her for her sin, Jesus showed love, compassion, and forgiveness. Her accusers were convicted of their own imperfect sin nature and left the scene.

“When Jesus had lifted up himself, and saw none but the woman, he said unto her, Woman, where are those thine accusers? Hath no man condemned thee? She said, No man, Lord. And Jesus said unto her, Neither do I condemn thee: go, and sin no more.” – John 8:10-11.

Jesus’ love is amazing. Her sin was worthy of death according to the Law, but Jesus is greater than the Law. You also need to look at the last words He said to her “…go, and sin no more.” He forgave her, but didn’t say it was okay to continue sinning. She was saved by grace, but had to change her lifestyle. Right at that moment she was probably the most thankful and repentant person on earth…her life had been spared. I often wonder if later she harbored some hateful thoughts towards the men who had trapped and betrayed her. Jesus said even thinking hateful thoughts is the same as murder. I’m sure she had sin in her life until the day she died, but she could always remember the day she was saved by grace. The same man who recorded the account of this woman, would later write:

“If we confess our sins, he is faithful and just to forgive us our sins, and to cleanse us from all unrighteousness.” – 1 John 1:9.

Confess the sin to Jesus, then leave that sin behind.

The fear of being judgmental is also a problem. Scripture cautions us that if we judge others we will be judged accordingly, but we need to study Scripture and use it as our guide for our own actions, and to judge the actions of others.

“Judge not according to the appearance, but judge righteous judgment.” – John 7:24.

Jesus said that, so we can trust it to be true. Fear of being judgmental can cause us to be so open minded and accepting of all sin that we no longer serve Christ. Paul addressed this problem when he wrote to the very liberal Corinthian Christians.

“It is reported commonly that there is fornication among you, and such fornication as is not so much as named among the Gentiles, that one should have his father’s wife. And ye are puffed up, and have not rather mourned, that he that hath done this deed might be taken away from among you.” – 1 Corinthians 5:1-2.

How many congregations today are proudly accepting sin within the congregation and in the pulpit? Pastors seldom talk about sin and, indeed, today one of the vilest of sins is being promoted. Men dressed as women are invited to speak and even encouraged to speak with the children. That’s pure wickedness straight from Satan. Christian congregations need to be a place where sinners are led to repentance with love, but not encouraged to continue in sin. What did Paul tell the Corinthian congregation to do about the vile sin they accepted?

“To deliver such an one unto Satan for the destruction of the flesh, that the spirit may be saved in the day of the Lord Jesus. Your glorying is not good. Know ye not that a little leaven leaveneth the whole lump? Purge out therefore the old leaven, that ye may be a new lump, as ye are unleavened. For even Christ our Passover is sacrificed for us: therefore let us keep the feast, not with old leaven, neither with the leaven of malice and wickedness; but with the unleavened bread of sincerity and truth.” – 1 Corinthians 5:5-8.

Leaven is used symbolically for sin. When a little leaven is put into bread dough, it puffs up the entire loaf. When a little sin is put into a congregation, it spreads to everyone. Paul told them not to let the sin of malice and wickedness motivate them in putting the man out of the congregation, but with sincerity and truth, expel him. When we confront sin, we must do it in love. Paul went on to list other sins that a Christian is not to associate with. When we profess Christ for salvation, we are to “…go and sin no more.” Non-Christians are simply lost and have no moral guide, so they don’t understand their sin. We do need to witness to them and lead them to repentance and eternal life only found through Jesus.

Brothers and sisters, remember to get the splinter out of your own eye before judging other sins, and then use righteousness only found in Christ. Jesus loves sinners and wants everyone to come to salvation.

“To wit, that God was in Christ, reconciling the world unto himself, not imputing their trespasses unto them; and hath committed unto us the word of reconciliation. Now then, we are ambassadors for Christ, as though God did beseech you by us: we pray you in Christ’s stead, be ye reconciled to God. For he hath made him to be sin for us, who knew no sin; that we might be made the righteousness of God in him.” – 2 Corinthians 5:20-21.

We are His ambassadors, not His judge and jury. We must turn from our sin and encourage fellow believers to leave their sin behind.

We need to be careful when we point fingers at other people and accuse them of being less than Christian in their actions.

“Even the righteousness of God which is by faith of Jesus Christ unto all and upon all them that believe: for there is no difference: for all have sinned, and come short of the glory of God;” – Romans 3:22-23.

I can think of times in my life that someone could misinterpret something I’ve done, and wrongly taken me to task for it. On the other hand, there were other times when it would have been good if a Christian friend would have kindly had a word with me. Time is running out. The Rapture will take all Christians Home to be with our Lord and Saviour and the age of Grace will come to an end. The truth is, you may die before the Rapture.

“I beseech you therefore, brethren, by the mercies of God, that ye present your bodies a living sacrifice, holy, acceptable unto God, which is your reasonable service. And be not conformed to this world: but be ye transformed by the renewing of your mind, that ye may prove what is that good, and acceptable and perfect, will of God.” – Romans 12:1-2.

Repent from the sin in our own life, encourage fellow Christians in their walk, and witness to the lost. Jesus is ready to forgive all sin and each new day brings the opportunity to serve Him. Stop judging and condemning others, and pay attention to your own walk. Jesus loves you and has forgiven you of your own sins. Forgive yourself and forgive others.

Our righteousness is only through Christ.