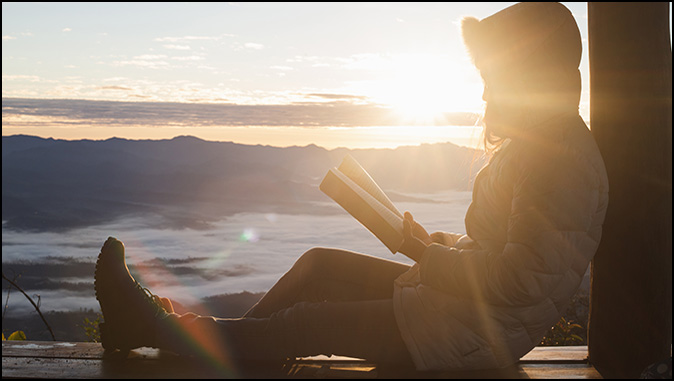 Quenching the Spirit
By Nathele Graham

Have you ever been very thirsty? Then you went to the refrigerator, pulled out an ice cold glass of water, and quenched your thirst? Maybe when you were a child you played with matches and one dropped in dry grass. Hopefully you acted quickly and quenched the fire before it spread. Those are two examples of when quenching something is a good thing, but Paul wrote to the Thessalonians “Quench not the Spirit.” 1 Thessalonians 5:19.

The Holy Spirit should be the driving force in our Christian walk, but we have the ability to quench His power in our life. That’s not good at all, but many Christians do just that.

We sometimes think that the Holy Spirit was a new concept which began with the birth of the church. The Holy Spirit is the third person of the Trinity, and we first see Him mentioned in Genesis.

The Holy Spirit doesn’t draw attention to Himself, but works in perfect harmony with God the Father and God the Son. He works in a very different way today than He did prior to the cross, but He was very active during the Old Testament times. There was much evil during the time of the Judges, but when God called a man to be a judge over Israel, that man was guided by the power of the Holy Spirit. For instance, Othniel was called by God.

“And the Spirit of the LORD came upon him, and he judged Israel, and went out to war: and the LORD delivered Chushanrishathaim king of Mesopotamia into his hand, and his hand prevailed against Chushanrishathaim.” – Judges 3:10.

When we read the story of King David, we read about a man who loved the Lord and his desire was to serve Him. Nevertheless, David committed a very grave sin, and as usually happens one sin led to another. First, he lusted after Bathsheba, who was married to a very faithful soldier. When David found out Bathsheba was pregnant, he eventually had her husband placed in a position in which it was certain he would be killed. When David was confronted by the prophet Nathan regarding this sin, David was deeply convicted and knew he was in danger of losing his anointing and faced the very real possibility that the Holy Spirit would be taken away from him. So, David did all he could do. He repented and was deeply sorry for his sin. He humbly cried out to God for mercy and asked to be cleansed of his iniquity. He didn’t blame anybody but himself for this great sin against God. We can hear his anguish as he poured out his heart to God.

“Create in me a clean heart, O God; and renew a right spirit within me. Cast me not away from thy presence; and take not they holy spirit from me. Restore unto me the joy of thy salvation; and uphold me with thy free spirit.” – Psalm 51:10-12.

David knew he was nothing without God, and the Holy Spirit was his strength. If only Christians today weren’t so swift to live in the flesh rather than living in the Spirit, we would be much better off

Jesus told His disciples that He had to die in order for the Holy Spirit to come to them, and to us.

“Nevertheless I tell you the truth; it is expedient for you that I go away: for if I go not away, the Comforter will not come unto you; but if I depart, I will send him unto you. And when he is come, he will reprove the world of sin, and of righteousness, and of judgment:” – John 16:7-8.

After the resurrection, Jesus paid a visit to the locked room where the disciples were hiding in fear. He made sure they understood it was Him, even though they had seen the crucifixion and knew the tomb was sealed. He showed them the scars of the nails and His wounded side.

“Then said Jesus to them again, Peace be unto you: as my Father hath sent me, even so send I you. And when he had said this, he breathed on them, and saith unto them Receive ye the Holy Ghost:” – John 20:21-22.

“In whom ye also trusted after that ye heard the word of truth, the gospel of your salvation: in whom also after that ye believed, ye were sealed with that holy Spirit of promise, which is the earnest of our inheritance until the redemption of the purchased possession, unto the praise of his glory.” – Ephesians 1:13-14.

If you’ve truly placed your faith in Christ, you are sealed with the Holy Spirit until death or the Rapture takes you Home.

The disciples were the first to experience the indwelling of the Holy Spirit, but they had to wait for the power of the Holy Spirit to come upon them. They waited in Jerusalem until the Jewish feast of Pentecost came.

“And suddenly there came a sound from heaven as of a rushing mighty wind, and it filled all the house where they were sitting. And there appeared unto them cloven tongues like as of fire, and it sat upon each of them.” – Acts 2:2-3.

I have never experienced such a marvelous thing, but I would like to. Study Peter’s life and how he reacted to Jesus being arrested and crucified. Jesus forgave him, and it was Peter who fearlessly stood before a Jewish crowd on that Pentecost morning and spoke words that accused the listeners of their sin, but also spoke of forgiveness.

“Then they that gladly received his word were baptized: and the same day there were added unto them about three thousand souls.” – Acts 2:41.

Too many preachers today are very afraid of offending sinners so they water down God’s truth to the point that the congregation is starving. Jesus had instructed Peter to feed the flock, and Peter was obedient. Although Peter did the talking that day, the other disciples were also filled with the power of the Holy Spirit. Because they all obeyed Christ and shared the Gospel, Christianity grew and many people have given their lives to Christ since then.

Christians today are so afraid of offending someone who is lost in sin that we put stumbling blocks in our own way. Fear keeps us from speaking boldly of the Gospel, and God’s forgiveness. The Apostle Paul was a man who had been forgiven of his sin. It was a very great sin, done in the name of God, but was also opposed to everything God taught. When Paul met Jesus on the Road to Damascus, Paul was totally changed. He wasn’t afraid to share the Gospel of Christ with everyone he met. His letters are instructions as to how a Christian should act.

“Let him that stole steal no more: but rather let him labour, working with his hands the thing which is good, that he may have to give to him that needeth. Let no corrupt communication proceed out of your mouth, but that which is good to the use of edifying, that it may minister grace unto the hearers. And grieve not the holy Spirit of God, whereby ye are sealed unto the day of redemption.” – Ephesians 4:28-30.

How do you grieve the Holy Spirit? Do you put any activity ahead of Jesus? Do you have time to read secular novels, but can’t find time to study God’s word? Do you have plenty of time for sports, television, and building your bank account, but are too tired to pray for the needs of others? Maybe you fly off the handle in anger if someone upsets you, but you can’t find forgiveness in your heart even though your own sins have been forgiven. Maybe you participate in activities that are contrary to God’s truth forgetting that as you sin you take the Holy Spirit with you down the path of wickedness. You are quenching the Holy Spirit, and hampering His activity in your life.

There is a glorious life ahead of every Christian. Eternity with Christ will outshine anything of this earth. Don’t quench the fire of the Holy Spirit in your life. Paul had visited Thessalonica and was there for three weeks. In that short time, he established a congregation and schooled them in the Gospel. He also taught them about the Rapture. Has your pastor taught the Gospel or touched on prophecy and the Rapture? Many don’t see the need to equip Christians to be in the world but not of the world. Paul’s first letter to the Thessalonians is filled with some very deep teaching, as is his second letter. He reminded them that the Rapture was coming and that they should be alert They weren’t in darkness, but were children of light. He encouraged them, and us, to be watchful and have no fear because we aren’t appointed to wrath. Paul encouraged them, and us, in their walk with Christ.

“Now we exhort you, brethren, warn them that are unruly, comfort the feebleminded, support the weak, be patient toward all men. See that noen render evil for evil unto any man; but ever follow that which is good, both among yourselves, and to all men. Rejoice evermore, pray without ceasing, in every thing give thanks; for this is the will of God in Christ Jesus concerning you. Quench not the Spirit. Despise not prophesyings. Prove all things; hold fast that which is good. Abstain from all appearance of evil And the very God of peace sanctify you wholly; and I pray God your whole spirit and soul and body be preserved blameless unto the coming of our Lord Jesus Christ.” – 1 Thessalonians 5:14-23.

Live to please Christ not the world. React to situations in a Christian manner, no matter how you’ve been treated. You can let the Holy Spirit revitalize you, or you can quench His power. Remember the change in Peter and in Paul when they allowed the Holy Spirit to guide them. Thanks to these men, and many like them, you’ve come to salvation through Christ. Let the power of the Holy Spirit flow through you.

Stop quenching the Spirit by holding tightly to sin and living for worldly things. Let Him live through you.