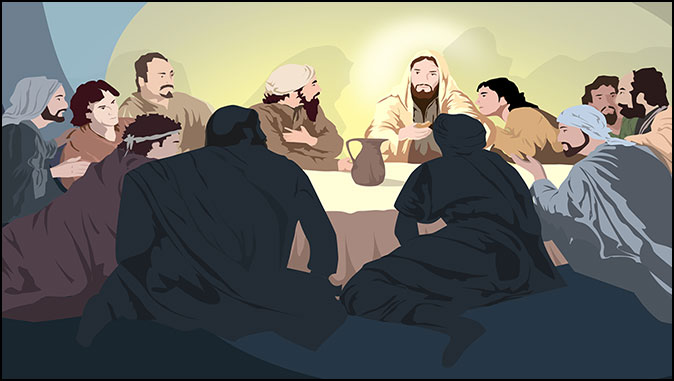 Brothers and sisters, we’ve dropped the ball. It’s not too late to pick it up again, but we’ve let our Lord down. How? We don’t disciple new believers. That was actually a direct command from Jesus. “And Jesus came and spake unto them, saying, All power is given unto me in heaven and in earth. Go ye therefore, and teach all nations, baptizing them in the name of the Father, and of the Son, and of the Holy Ghost: teaching them to observe all things whatsoever I have commanded you: and, lo, I am with you always even unto the end of the world. Amen.” Matthew 28:18-20. We need to preach the Gospel, we need to live the Gospel, and we need to teach the Gospel. Godly men need to mentor younger men to observe all of the teachings of Christ, and Godly women need to mentor younger women to serve God wholeheartedly. Today it seems that it’s important to get people into the pews, but it’s less important to teach the Christian way of life. It takes commitment to mentor someone in the ways of Christ, and there’s much that gets in the way of that, such as the latest baseball scores, an evening in your easy chair watching TV, or any number of other gods that are put ahead of God Almighty. When a person comes to the realization they need to give their life to Jesus, they need to understand what that means. “And when he had called the people unto him with his disciples also, he said unto them, Whosoever will come after me, let him deny himself, and take up his cross, and follow me.” Mark 8:34. That means we set aside our selfish desires and do whatever it takes to serve Jesus. That includes mentoring new believers. When you first came to Christ, did someone teach you how to live to please God? Maybe you’ve been a Christian for years but have never learned to deny your selfish desires in order to put Jesus first. The first step in being a mentor is to know what Jesus taught. That means you set aside time to study God’s word and then apply it to your own life. Remember, God’s word hasn’t changed over the years, so don’t twist Scripture to fit what you want to believe or how you want to live. Then, make disciples of others by teaching the pure word of God. You don’t need the approval of a denomination or a seminary education to study and understand Scripture. You only need the Holy Spirit to guide you and the commitment to live your faith.

Jesus gave Peter instructions to disciple people. “So when they had dined, Jesus saith to Simon Peter, Simon, son of Jonas, lovest thou me more than these: he saith unto him, Yea, Lord; thou knowest that I love thee. He saith unto him, Feed my lambs.” John 21:15. Lambs are the new believers who need nourishment to grow into strong members of the flock. Peter was to feed the lambs and also the sheep…new believers as well as the ones who’ve believed for years. He was to teach them what he had learned as he followed Jesus. Don’t think that new believers can’t handle any deep truths. Paul was in Thessalonica for “3 sabbath days” (Acts 17:2), but in those 3 weeks he made converts, established a congregation, and taught them deep truths, such as the pre-tribulation Rapture. What if Paul had shared the Gospel, then sat back and relaxed? He taught them and made sure they understood the teachings of Christ. Paul fed the lambs who matured quickly because he taught them the word of God.

That was Paul’s normal way of missionary work. He would enter a city and his first stop was at the synagogue where he preached the Gospel. This usually didn’t go over very well with the leaders, but some of the people were drawn to the truth. That’s when he began teaching. After a solid foundation of Christ was laid, the congregation was built upon that solid Rock. Men were taught to be leaders and then Paul would move on to another city. Even though he went away from these congregations, he left trusted men in charge who he had been thoroughly taught Christian truth. Paul never forgot them. He wrote letters encouraging them to stay faithful to the Gospel and maintain Christian standards. Paul had men with him who he could trust with God’s word. Barnabas was a wonderful man of God who first encouraged Paul to use his vast knowledge of God’s word and the deep conviction of Christ’s death, burial, and resurrection to take the Gospel to the Gentiles. Timothy was a young man who traveled with Paul and stayed in Ephesus to pastor the congregation there. He first was taught the Gospel by his mother and grandmother. These ladies were commended for their faith, but men need to be discipled by men in order for them to be strong men of faith…strong Christians. Paul wrote two letters to Timothy making sure he didn’t compromise in the leadership of his congregation. Titus traveled with Paul and was left in Crete to pastor the congregation there. Paul’s letter to him gives guidance to pastors in leading a congregation. “But speak thou the things which become sound doctrine: that the aged men be sober, grave, temperate, sound in faith, in charity, in patience…Young men likewise exhort to be sober minded.” Titus 2: 1-2 & 6. Men are to honor Christ in all things, not partying nor treating their faith as something you do on Sunday morning. They are to be serious about living a life that pleases Christ. Women are to behave themselves, too. “The aged women likewise, that they be in behaviour as becometh holiness, not false accusers, not given to much wine, teachers of good things; that they may teach the young women to be sober, to love their husbands, to love their children, to be discreet, chaste, keepers at home, good, obedient to their own husbands, that the word of God be not blasphemed.” Titus 2:3-5 Women aren’t to take the place of men in leadership. So often today, nobody wants to offend women so they assume leadership of congregations. Men’s leadership was established in the Garden of Eden and confirmed by Christ in the fact that even though women were among His followers, He chose men as His disciples. This wasn’t a cultural thing, but a truth that is seen throughout Scripture. Women have an important place within Christianity, but always under the authority of a strong, God-fearing man. Men and women are to be disciples and taught God’s truth. Then, they are to obey and teach others.

Too often when a person has heard the Gospel and responded to it, they are left on their own to figure out what Christ wants from them. Then, it’s easy to slip back into old ways of life. Friends who once were a poor influence are back influencing that new believer. Rather than being a witness for Christ to secular family and friends, the lamb stumbles back into old ways. Foul language has crept back into every day talk, and rather than honoring God with life and words, he or she slips down to the ways of the world. Most people have heard of the Ten Commandments, and one of those is “Thou shalt not take the name of the LORD thy God in vain; for the LORD will not hold him guiltless that taketh his name in vain.” Exodus 20:7. Mostly we think this means don’t swear. It does mean that as seen in Paul’s letter to the Ephesians. “Let no corrupt communication proceed out of your mouth, but that which is good to the use of edifying, that it may minister grace unto the hearers.” Ephesians 4:29. It also means don’t have empty faith. Young men and women need to be taught (discipled) in the ways of Christ so they don’t just pretend to take the name of Christ upon themselves. The place where I worship has a few minutes during Sunday service where a very strong man of God sits down with the children in the congregation and with very few words gives them a strong teaching of how they can serve Christ. Within the last year, two of those young people have given their lives to Christ and now they are being taught to serve Him.

A big problem in any Christian’s life is that the ways of the world and the wiles of Satan are very tempting. Satan whispers “You don’t need to go to church to be a Christian”. That’s right, but by separating from fellow believers your thoughts easily turn to secular things. We’re told in Scripture to not forsake fellowshipping with fellow believers (Hebrews 10:25). That doesn’t necessarily mean attending Sunday services, but separating from secular friends and family and surrounding yourself with fellow believers who draw each other closer to God. Satan whispers again, “That movie really isn’t so bad, the cussing and violence are part of the plot”. The saying “Garbage in, garbage out” applies to television, movies, and music (Colossians 3:1-2) Satan says again, “You have to send your children to public school in order properly educate them”. Really? If they were getting a sound education in Reading, writing, and arithmetic, that would be good. Today they spend a lot of time studying how to have sexual intercourse, why it’s acceptable for Tommy to think he’s Theresa, and evolution has replaced God’s truth. These things and much more disciple children in the ways of Satan. Do you really think an hour in Sunday school will erase the lies they learn in public school? What about college students who are being brainwashed by liberal colleges to reject Christ? Tuition is very high to be taught that lie. “Train up a child in the way he should go: and when he is old, he will not depart from it.” Proverbs 22:6. Parents, you better disciple your child in the ways of the Lord before they enter school because they will be discipled in the ways of Satan once they enter kindergarten. Read Romans chapter 1 and take it to heart.

If you have just met Jesus, you need to be discipled by a strong Christian who doesn’t compromise God’s truth. Seek out a teacher of God’s truth. Learn the ways of the Lord and follow Him. Are you an older Christian? There’s a young man or woman who needs your wisdom and the teaching that comes from the Lord. Seek out that person and make disciples.