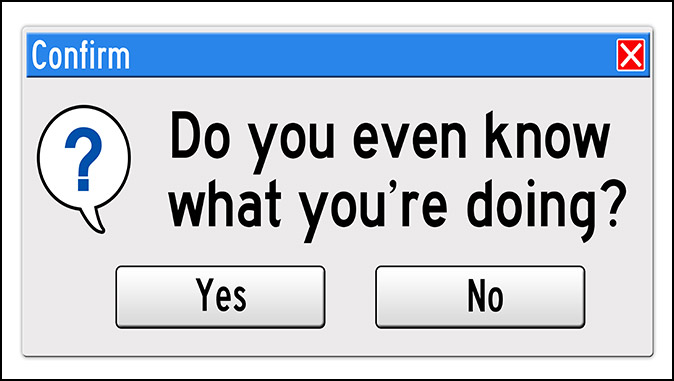 Knowing and Doing
By Nathele Graham

Life is a series of choices. The choices we make affect our entire life. For instance, if you choose to overindulge in rich foods, you can seriously damage your health. Weight gain, high blood pressure, diabetes, high cholesterol, and more are all a result of poor food choices. Too much alcohol brings serious consequences, as does sexual promiscuity. Bad choices have been around since the beginning of time, and all of creation suffers because of Adam and Eve knowing what was right, but choosing to do what was wrong. We must remember that God had very clearly told Adam what would happen if he ate from the tree of Knowledge of Good and Evil. God tells us too, through Scripture. Sin separates us from God, who created us. God is love and wants to forgive our sin. Even though Adam willingly chose to disobey God, his sin was covered by God by shedding the blood of an animal to clothe Adam and Eve with the skin.

“Unto Adam also and to his wife did the LORD God make coats of skins, and clothed them.” – Genesis 3:21.

Life in the Garden, prior to Adam’s sin, was very different than life today, but God still loves us and has given us the only way to take away the sin that separates us from Him.

Adam made a choice to sin, and we have that same choice. There’s only one sin that cannot be forgiven, and that is choosing to reject the sacrifice which Jesus made. He shed His blood as the final sacrifice to take sin away. You must make the choice to accept His sacrifice while you’re living this life.

Still, knowing what’s right and doing what’s right are two different things. Knowing is head knowledge, but doing comes from the heart. After Adam and Eve were expelled from the Garden of Eden, life became difficult. Nobody has ever been more aware of the result of sin than they were.

“For the wages of sin is death, but the gift of God is eternal life through Jesus Christ our Lord.” – Romans 8:3.

They knew what was right, but did what was wrong. People haven’t changed much over time. After Adam and Eve were evicted from the Garden, they had two sons, Cain and Abel. They were well aware of the importance of shedding animal blood to cover sin. God gave the example when He shed blood to cover Adam and Eve’s nakedness with animal skins.

“And almost all things are by the law purged with blood; and without shedding of blood is no remission.” – Hebrews 9:22.

The importance of animal sacrifice was known to Cain and Abel, and they knew what was right. Cain was a farmer who grew crops, but Abel was a rancher who raised sheep.

“And in the process of time it came to pass that Cain brought of the fruit of the ground an offering unto the LORD. And Abel, he also brought of the firstlings of his flock and of the fat thereof. And the LORD had respect unto Abel and to his offering: But unto Cain and to his offering he had not respect. And Cain was very wroth, and his countenance fell.” – Genesis 4:3-5.

What exactly is sin? That’s a word we use a lot, but do we understand what it means? Many things get named sin by people that God doesn’t name as sin in Scripture. There are also things God names as sin, but people accept as a lifestyle. Sin is something we commit against God. The word in Greek is “hamartia” and means “to miss the mark” or to “miss or wander from the path of uprightness and honor, to do or go wrong”, or “to wander from the law of God, violate God’s law, sin”. So, when God told Adam,

“But of the tree of the knowledge of good and evil, thou shalt not eat of it.: for in the day that thou eatest thereof thou shalt surely die.” – Genesis 2:17.

It was a warning for Adam’s protection, rather than God trying to ruin Adam’s fun. Adam knew what was right, but instead of doing what was right, he sinned. Throughout Scripture, we see God’s love as He guides mankind toward the path that leads to salvation, but we also see mankind choosing the wrong path.

“In those days there was no king in Israel, but every man did that which was right in his own eyes.” – Judges 17:6.

That’s why we have troubles in life.

Most Christians know what is right. Scripture tells us God’s ways. Loving one another is a command from Jesus.

Knowing and doing are two different things. We know we are to reflect God’s love, but do we? We need to study Scripture and use Jesus as our example of love. The Gospel of John shows us many examples of how Jesus loved people. Jesus was fully God, but He was also fully human. His body got tired, but even when He needed rest, He had time for others. Humans had no way to bridge the gap to God; sin had made that impossible. Jesus was God’s answer to our need. God Himself stepped into this world and putt His glory aside to provide our only way for salvation. Jesus said:

Jesus showed us that love. Knowing we should unselfishly love others, and actually loving them are two different things.

We know that we need to be humble. Pride gets in the way of us showing God’s love. Instead of building up our own ego, we need to humble ourselves before our Lord. James tells us:

Humility is something we humans have a very hard time with. If we think someone else is getting more kudos, we get miffed.

“Pride goeth before destruction, and an haughty spirit before a fall.” – Proverbs 16:18.

We know that, but what do we do about it? Instead of living as an example of a humble child of God, too often we allow pride to stumble our walk. We see so many special interest groups who think that rioting or having parades to display their sin is the way to be respected. The truth is that living a humble life that honors God is how Scripture tells us to live. Marriages fail because both the husband and the wife demand to be in control. Pride gets in the way of contentment. A man is to love his wife in the same way Christ loves His church and a wife is to submit to her own husband.

We aren’t alone in our plight. The Apostle Paul wrote about his own struggle with knowing and doing.

“For I know that in me (that is, in my flesh,) dwelleth no good thing: for to will is present with me; but how to perform that which is good I find not. For the good that I would I do not: but the evil which I would not, that I do.” – Romans 7:18-19.

He wanted to do right, but he felt as if he didn’t do what was right…

Paul was a very smart man. He knew the problem was sin dwelling in him. We all have that same problem today. We allow sin to rule our actions rather than allowing Christ to be our example to follow.

“O wretched man that I am! Who shall deliver me from the body of this death? I thank God through Jesus Christ our Lord. So then with the mind I myself serve the law of God; but with the flesh the law of sin.” – Romans 7:24-25.

So often I feel wretched because I have failed to do what is right. In my mind – Greek word “nous” meaning the intellect and thoughts – I know what God says to do, but in my flesh – Greek word “sarx” meaning my human nature – I fail to do what’s right. Knowing and doing are two different things.

Even though we know what’s right, but don’t do it, we have forgiveness through Jesus Christ. Jesus was God incarnate, and only faith in His death, burial, and resurrection can take sin away. Good works don’t earn salvation, but it’s our kindness that shows Christ to a lost world. There is nothing we can do that’s good enough to earn our right for salvation. Only faith in Jesus will bring eternal life.

“For by grace are ye saved through faith; and that not of yourselves: it is the gift of God: not of works lest any man should boast.” – Ephesians 2:8-9.

“For as the body without the spirit is dead, so faith without works is dead also.” – James 2:26.

Let your faith show in the way you behave.

Knowing and doing. We all struggle with it. Pray and be sure to study Scripture in order to know God’s will. Follow the example of Jesus.

The Strong Delusion By Nathele Graham It’s coming. Whether you believe in the Harpazō or…

Thank You, God, For Everything

Thank You, God, For Everything By Nathele Graham “Every good gift and every perfect gift…

Stand Firm on Faith in God

What Can I Do Now?

What Can I Do Now? By Nathele Graham “But God commendeth his love toward us,…

Do You Conform to God or to the World?

Do You Conform to God or to the World? By Nathele Graham There is no…

What Are You Celebrating?

What Are You Celebrating? By Nathele Graham There’s no doubt about it. People enjoy celebrating.…