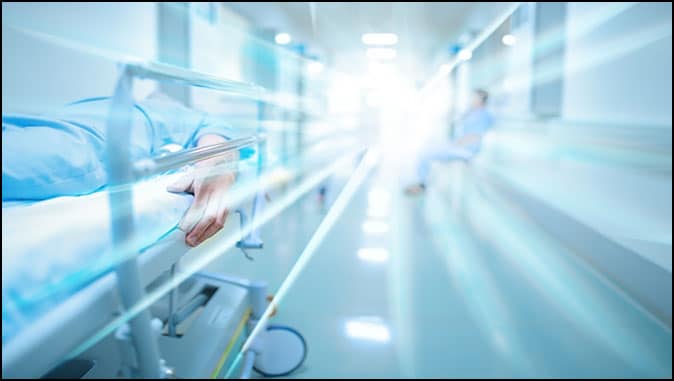 If You Die Tomorrow, Where Will You Spend Eternity?
By Nathele Graham

The most important question of all time is, “Where will you spend eternity?” People have come up with various answers to that question, and most are wrong. “I’m a good person, so I’ll go to Heaven”. Wrong. “For all have sinned and come short of the glory of God.” Romans 3:23. Nobody can be “good enough” to earn the right to abide in Heaven. Heaven is waiting only for people who have accepted the death, burial, and resurrection of Jesus Christ for the forgiveness of sins. People usually judge “good” people and “bad” people based on human standards, and we usually excuse our own sins. Eternity is judged by God’s standards. “As it is written, There is none righteous, no not one.” Romans 3:10. We are only made righteous by the blood of Jesus. By God’s standards, nobody is “good enough”, and that’s why Jesus had to shed His blood for us. Jesus was God incarnate and only His blood was pure enough to be the once for all sacrifice to take sin away. Gratitude for what He did should make you do good works in His name, but those good works won’t bring salvation. “For by grace are ye saved through faith; and that not of yourselves: it is the gift of God: not of works, lest any man should boast.” Ephesians 2:8-9. Only God’s blood, untainted by sin, can bring salvation. Nobody can work hard enough nor do enough good things to earn salvation. Another goofy idea is people are reincarnated. Wrong again. We live this life, make our choices, then upon death we either go directly to be with the Lord or we wait for the final judgment, depending upon whether or not you accepted Christ’s shed blood for salvation. You don’t recycle through life, nor do you become an angel upon death, which is another erroneous human idea. Angels were created by God prior to when He laid the foundations of the world.

Other questions you should seek answers for are, is there an afterlife? Is Hell real? Is Heaven real? The answer to those questions is yes. The Old Testament uses the word “sheol” which means “the abode of the dead”. It was the place where souls went after death. It’s translated variously as “grave”, “hell”, and “pit”. The first place the word is used is in Genesis when Jacob’s sons lied and told him that Joseph had been killed, when in fact they sold him to A group of Midianites, who sold him to Potiphar in Egypt. Jacob’s grief was deep. “And all his sons and all his daughters rose up to comfort him; but he refused to be comforted; and he said, For I will go down into the grave unto my son mourning. Thus his father wept for him.” Genesis 37:35. Jacob said “grave”, but he wasn’t talking about where his body would be placed upon death. The word “grave” is Sheol, the abode of the dead where souls would rest while waiting their final destination…peace in Heaven or the flames of Hell-fire.

Jesus told a story which is recorded in the New Testament, and gives us a peek into life after death prior to the cross. In it He tells of a place of comfort and a place of flames and torment. The story is found in Luke chapter 16. There was a poor man named Lazarus. He didn’t have money for food and was in poor health. A rich man often walked past Lazarus with no concern about his condition. The inevitable happened and both died “And it came to pass, that the beggar died, and was carried by the angels into Abraham’s bosom: the rich man also died, and was buried; and in hell he lift up his eyes being in torments, and seeth Abraham afar off, and Lazarus in his bosom.” Luke 16:22-23. There’s a lot to learn from this verse. The Greek word translated “hell” is “Hades” and is the Greek equivalent of Sheol. The abode of the dead, had two sides. One side was where those who honored God went. It was a place of comfort often called Abraham’s Bosom. The other side wasn’t at all comforting, and was called “torments”. In both places, those who awaited their final destination could feel comfort or pain. The rich man was in torments feeling pain and suffering. “And he cried and said, Father Abraham, have mercy on me, and send Lazarus, that he may dip the tip of his finger in water, and cool my tongue; for I am tormented in this flame.” Luke 16:24. The rich man should have made better choices while living on this side of eternity. Abraham explained that fact to him. “But Abraham said, Son, remember that thou in thy lifetime receivedst thy good things, and likewise Lazarus evil things: but now he is comforted, and thou art tormented.” Luke 16:25. Many times people interpret this story to prove it’s better to suffer in this life than it is to be rich. It’s actually telling us that what we do with what we have is what matters. We hear about many very wealthy people who run the internet and computer companies, but aren’t using their wealth to honor God. If we are given much but are selfish with it, we have put our wealth on the throne rather than Jesus. “For the love of money is the root of all evil: which while some coveted after, they have erred from faith, and pierced themselves through with many sorrows.” 1 Timothy 6:10. The money isn’t evil, but the love of it causes the problem. The rich man loved his wealth more than he loved God.

There was a gulf between torments and Abraham’s Bosom that could not be crossed. They could see each other, but not pass from one side to the other. We also learn that those who have gone on remember those of us who still have a choice of where to spend eternity. “Then he said, I pray thee therefore, father, that thou wouldest send him to my father’s house: for I have five brethren; that may testify unto them, lest they also come into this place of torment.” Luke 16:27-28. Although the rich man remembered his family, he couldn’t contact them, nor could anyone be sent to them from the other side. If you think you’ve had a message from your Uncle Charlie or Grandma, you haven’t. God warns against trying to contact the dead. We have Scripture to guide us to eternity and the Holy Spirit to show us the paths of righteousness of God.

After the cross all was changed. Those who inhabited Abraham’s Bosom were led to their reward by Jesus, and today if we have accepted Christ’s death, burial, and resurrection, death is not to be feared. Christ conquered death and the grave has no hold upon us. “O death, where is thy sting? O grave, where is thy victory?” 1 Corinthians 15:55. Jesus left an empty tomb; His death was a victory, and we who have placed our faith in Him have nothing to fear from death. “Therefore we are always confident knowing that, whilst we are at home in the body, we are absent from the Lord:” 2 Corinthians 5:6. Today, you have the choice of where you will spend eternity…with Jesus or in the lake of fire. Christian’s works will be judged at the Bema Seat of Christ. Our sins are forgiven, so it won’t be a judgment of Heaven or Hell, but our actions will be judged. Our rewards will be crowns that we will be able to return to Jesus in humble gratitude for the price He paid for our redemption. Those who reject Christ’s free gift of salvation will spend eternity in the burning lake of fire. The beast and the false prophet will join the devil in that eternal lake of fire, and those who will take the Mark of the Beast, thus choosing to reject Jesus while following evil It is an eternal punishment. Finally, all who remain in the abode of the dead will join them. “And death and hell were cast into the lake of fire. This is the second death. And whosoever was not found written in the book of life was cast into the lake of fire.” Revelation 20:14-15.

God doesn’t send anyone to Hell, but we make our own choice here in this life. Jesus gave His life to give humans the only way to avoid Hell-fire and damnation. If we place our faith in Him, we will spend eternity in Heaven. I’ve chosen eternity with Him in Heaven, have you? The choice has to be made now…there is no such thing as purgatory…no second chances, and you can’t work your way out of Hell. If you don’t respond to the Gospel message before death, then you’ve made your own eternal choice. Today you need to admit you’re a sinner, believe that Jesus Christ paid the price for your redemption, and accept His gift of salvation. “For me to live is Christ and to die is gain.” Philippians 1:21. The Apostle Paul suffered many things while on this earth, but he kept his eyes on Jesus and knew that, by faith, when he died, he would be with the Lord. Today, Paul is waiting in Heaven to receive his crowns for a life lived for Christ. I have many loved ones who are there, too. What a glorious day it will be when we are all gathered around Jesus praising Him for our salvation. You will only be there if you’ve believed the Gospel truth prior to death. There is no other path to Heaven than through faith in Jesus. “Jesus saith unto him, I am the way, the truth, and the life. No man cometh unto the Father, but by me.” John 14:6. Trust Him today.

God doesn’t send us to Hell…we choose to go there when we reject Christ. Don’t put off your decision. Young people die as well as older people. It’s been said that God has no grandchildren and we must each make our own choice. If you were raised in a Christian household, you may understand your need for Jesus more than someone raised with secular influences, but you must make your own decision. Don’t think that if you were baptized as an infant you are covered. That decision wasn’t your own. Although important, baptism doesn’t bring salvation. Only your own personal faith in the death, burial, and resurrection of Jesus Christ will take your sin away. “That if thou shalt confess with thy mouth the Lord Jesus, and shalt believe in thine heart that God hath raise him from the dead, thou shalt be saved.” Romans 10:9. An infant cannot believe in his or her heart nor confess with his or her mouth.

Ask yourself “If I die tomorrow, where will I spend eternity?” It’s an important question and the answer you give to this question is the most important answer you need to have the right answer to. If you would like more information, talk to a Christian near you or send an email. Your salvation and eternity matter.