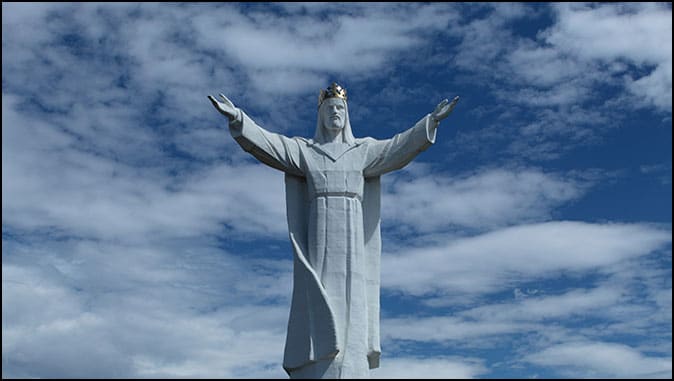 “For though we walk in the flesh, we do not war with the flesh: (for the weapons of our warfare are not carnal, but mighty through God to the pulling down of strong holds;) Casting down imaginations, and every high thing that exalteth itself against the knowledge of God, and bringing into captivity every thought to the obedience of Christ” – 2 Corinthians 10:3-5.

It can be easy to become discouraged today. There are many evils in this world, and so much can strike fear in the heart of even the most faithful soldier of the Lord. Wickedness seems to have no bounds. Babies are casually murdered in the womb, God’s standard of marriage is being trampled, and it’s politically incorrect to upset those who worship demonic gods, such as allah, while we keep our faith in Jesus Christ a secret. Add to all of this a pandemic that seems to be shutting down the world and paving the way for the events described in Revelation to take place. Israel is attacked, but when they fight to protect themselves, they are condemned. There are many end-time prophecies that are on the verge of being fulfilled, but instead of seeing these events as a rallying cry, Christians are silent. Christians are growing weaker in faith because many pastors don’t teach Scripture from the pulpit. Rather than standing firm on Scripture, they have compromised Biblical truth as they embrace practices like yoga, which is satanic in nature, and ideas like the emerging church, new age, meditation, purpose driven, replacement theology, anti-Semitism, and more. The watered-down theology has left Christians unsure of what they believe and why. Prophecy is ignored, so things happening in the world today frighten most Christians. You have no need to fear if you trust God. Scripture tells us that there will be tribulation in the world, but Satan won’t win. In fact, he’s already lost. The Lord wins. Christians need to do our part for Him and not side with the enemy. Our faith must not be compromised. “Finally, my brethren, be strong in the Lord, and in the power of his might.” Ephesians 6:10. Our strength is in God and He won’t lose.

THE BATTLE BELONGS TO THE LORD
written by Jamie Owens-Collins

Weapons of the world won’t win spiritual battles. We see and hear people all around us singing the praises of evil…newscasters, politicians, Hollywood stars, musicians, and more have much to say that promotes Satan’s work. Remember, these people are not the enemy. They only promote the enemy’s lies. The true enemy is Satan and his minions. The battle is spiritual and it must be fought with spiritual weapons. God makes His weapons available to every Christian, but it’s up to us to pick them up, put them on, and learn to use them effectively. “Put on the whole armour of God, that ye may be able to stand against the wiles of the devil.” Ephesians 6:11. No soldier can effectively fight in battle if he doesn’t know how to use the weapons of war. In the world today, a musket would be ineffective against a tank. Soldiers must learn to use modern weapons to win battles. So must the Christian soldier learn to use spiritual weapons for spiritual battles. How do you learn to use them? Study Scripture, including prophecy. Understand that you are indwelt by the Holy Spirit, and He will guide you in battle. Learn to listen to His voice. Be bold in standing upon God’s truth, and don’t be ashamed of your faith. You may lose friends because of your faith, but stand firm. “For I am not ashamed of the gospel of Christ: for it is the power of God unto salvation to every one that believeth; to the Jew first, and also to the Greek.” Romans 1:16. If you’re ashamed to speak out for Jesus, then you are weakening your spiritual weapons and siding with Satan.

Think of all the wicked things that are done in darkness. Robberies, murders, pornography, and more were once cloaked in the shadows of night, but people today seem to be less concerned about hiding in the dark to do evil. Satan is behind all evil. The darkness of Satan has nothing to do with whether the sun is shining or not. Satan is evil and the darkness that surrounds him is spiritual darkness. There is a much stronger power than the darkness of evil, and that power is found in the blood of Jesus Christ. What movies do you watch? What words do you use? What music do you listen to? Do the things you write on your heart glorify God, or numb you to the wiles of the devil? Instead of the darkness of sin, fully turn your life over to Jesus and find power in the blood He shed for your salvation. “Giving thanks unto the Father, which hath made us meet to be partakers of the inheritance of the saints in light: who hath delivered us from the power of darkness, and hath translated us into the kingdom of his dear Son: in whom we have redemption through his blood, even the forgiveness of sins:” Colossians 1:12-14. Satan has no power over us when we are in Christ. His blood paid for our redemption and the Holy Spirit is sealed in us. Keep your heart, mind, and soul tuned to Jesus and the power of darkness will flee.

There are many war stories from various battles throughout history where victory seemed out of reach. The battle seemed lost, but then a soldier remembered what he was fighting for and rallied his fellow soldiers to not be discouraged and to fight harder. The battle was won. Christianity also has war stories of men, and women, who never forget that God will win the war, but understand their part in the battle. Men like the Apostle Peter who did just as Jesus told him to do, “Feed My sheep” and fed them on the pure word of God. The Apostle Paul carried God’s truth to the Gentiles, and, as a Gentile, I appreciate his courage. Brave soldiers took Christ’s command seriously and the Gospel was shared. “And Jesus came and spake unto them, saying, All power is given unto me in heaven and in earth. Go ye therefore, and teach all nations, baptizing them in the name of the Father, and of the Son, and of the Holy Ghost: teaching them to observe all things whatsoever I have commanded you: and, lo, I am with you alway, even unto the end of the world. Amen.” Matthew 28:18-20. They preached the Gospel just as Jesus commanded, armed with the spiritual weapons of war. As time marched on, many politicians and religions tried to stop the spread of God’s truth. Men like Martin Luther bravely shouldered the spiritual weapons and fought for God’s truth. Have you ever heard the battle stories of Brother Andrew? He smuggled Bibles into Soviet countries, and now smuggles Bibles into Muslim nations. He’s 93 and still spreading the Gospel. Most of the “missionaries” today need to get back to Scripture and preach the Gospel instead of using gimmicks and works hoping that lost people will get the hint that they need Jesus.

Never stop singing His praises. Songs can keep you courageous when facing the power of the enemy. Sing praises to Jesus Christ who won the victory for you. He will never leave you. Remember when Paul was arrested in Philippi and was beaten and chained in the prison? The powers of darkness thought they had silenced Paul and Silas. “And at midnight Paul and Silas prayed, and sang praises unto God: and the prisoners heard them.” Acts 16:25. These men could not be silenced. Then an earthquake struck, making escape from the dungeon possible. That would have meant the jailer would be put to death. Because the other inmates heard the songs and prayers of Paul and Silas, they didn’t escape. The jailer was amazed. Because of the songs, prayers, and integrity of Paul and Silas, the jailer gave his life to Christ. Another spiritual battle was fought and a lost soul came to salvation through Jesus. Today the strong soldiers who won’t compromise God’s word, those who share the Gospel and teach God’s truth, are hard to find. Gimmicks are used instead of Scripture and God’s word is compromised. Many Christians are rusty in using the weapons of spiritual warfare, because they forget to study and apply Scripture. Take heart, God won’t lose.

What are the spiritual weapons? They’re armor provided by God. “Put on the whole armour of God, that ye may be able to stand against the wiles of the devil. For we wrestle not against flesh and blood, but against principalities, against powers, against the rulers of the darkness of this world, against spiritual wickedness in high places.” Ephesians 6:11-12. The enemy is Satan and his minions…not people. The battlefield is the human soul and the enemy seems fierce, but God won’t lose. To fight in this war effectively, you must train to use the spiritual weapons of God. “Wherefore take unto you the whole armour of God, that ye may be able to withstand in the evil day, and having done all, to stand. Stand therefore, having your loins girt about with truth, and having on the breastplate of righteousness; and your feet shod with the preparation of the gospel of peace; above all taking the shield of faith, wherewith ye shall be able to quench all the fiery darts of the wicked. And take the helmet of salvation, and the sword of the Spirit, which is the word of God: praying always with all prayer and supplication in the Spirit, and watching thereunto with all perseverance and supplication for all saints.” Ephesians 6:13-18. The instructions for using these weapons are found in Scripture. Study it from Genesis through Revelation and apply it to your life. The battle may rage and the enemy may seem strong, but God won’t lose.

Will you join me as I raise my voice in praise of Jesus Christ, the Commander in Chief of this army of believers? Will you Join me in battle against an unseen enemy who seeks only to destroy all of mankind? Our weapons are sufficient for victory because they are provided by God Himself. Don’t compromise His word. Victory is assured because God won’t lose.

God’s Will or Satan’s Will

God's Will or Satan's Will By Nathele Graham “Pride goeth before destruction, and an haughty…

Make Disciples By Nathele Graham Brothers and sisters, we’ve dropped the ball. It’s not too…

Don't Give Up By Nathele Graham Brothers and sisters, we need to stay strong. The…

We Won’t Be Here

Put On the New Man