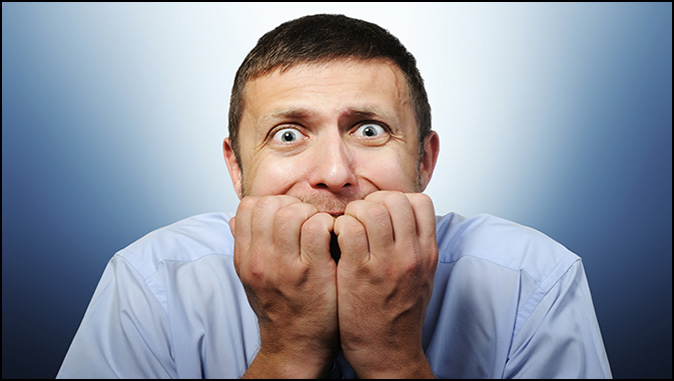 The word “fear” appears many times in Scripture. The first place we find it is in Genesis.

The Hebrew word used is “mora” a masculine noun that means “fear, reverence, terror”. The flood was over and the ark had come to rest upon the mountains of Ararat. God told Noah and his family to leave the ark. The animals, too, were to leave the safety of the ark and step into a world that was very different than the one they had known before entering the ark. The animals who had been cared for and tended to by Noah and his family, would now fear him because,

“Every moving thing that liveth shall be meat for you; even as the green herb have I given you all things.” – Genesis 9:3.

Now mankind was to eat meat. No wonder the animals felt fear.

The next place “fear” appears in Scripture is in Genesis chapter 15.

“After these things the word of the LORD came unto Abram in a vision, saying, Fear not, Abram: I am thy shield, and thy exceeding great reward.” – Genesis 15:1.

Abram had just fought a war against 10 kings and rescued his nephew, Lot. He had been victorious, and also had met Melchizedek, who blessed Abram. After that, Abram had a vision in which God told him not to fear. This time the word is “yare’”, which is a verb meaning “to fear, revere, be afraid”. A verb is an action word, so Abram, and we, aren’t to act out of fear. If we remember that Christ is our protector, hopefully we won’t do anything rash. Later in Genesis, Abraham’s wife, Sarah, had been taken captive by Abimelech, but Abraham had claimed she was his sister. In fact, he had married his half-sister, and he should have honestly said she was his wife. Fear made Abraham forget that God would protect him. Illness came upon Abimelech because of Abraham’s dishonesty, and he called Abraham out about the deception.

“And Abraham said, Because I thought, Surely the fear of God is not in this place; and they will slay me for my wife’s sake.” – Genesis 20:11.

Here we have “fear” again, but this time the Hebrew word is “yir’a”, a feminine noun meaning “fear, terror fearing. A fear (of God), respect, reverence, piety”. Whether or not the “fear of God” was in Abimelech’s heart and household, God still was Abraham’s protection. That’s something we need to remember. We live in fearful times, but just because ungodly governments cause war, and try to persecute Christians, we need to remember not to act in fear, but honor and trust in the Lord.

“Trust in the LORD with all thine heart; and lean not unto thine own understanding. In all thy ways acknowledge him and he shall direct thy paths.” – Proverbs 3:5-6.

There are other Hebrew words translated “fear”, but from these few verses we can understand that it’s a good idea to know what type of fear is being talked about.

Does God notice when people don’t fear, honor, and respect Him? Yes, He does. We read in Malachi, that God was not happy with the priests.

“A son honoureth his father, and a servant his master: if then I be a father, where is mine honour? And if I be a master, where is my fear? Saith the LORD of hosts unto you, O priests, that despise my name, And ye say, Wherein have we despised thy name?” – Malachi 1:6.

The word fear here is from “mora’”. Of all people, the priests should have reverence, fear, and terror about offering God “polluted” offerings. The Apostle Paul wrote to the Corinthians that we are the temple of God If you fear God, then be sure what you allow into the temple is Godly. Don’t pollute your offerings with sin.

The New Testament also has many Greek words translated “fear”. When an angel appeared to Zacharias, he was afraid.

The Greek word is “phobos”, used here as a masculine noun. It means “1) Fear, dread, terror and 2) Reverence for one’s husband”. Because of the love my husband showed me, I had much love and respect for him, but I can’t quite wrap my mind around the fear I might feel at seeing an angel. In the next verse the angel told Zacharias to “fear not”. The same word “phobos” is used, but this time it’s used as a verb.

Fear can silence us when we should have no fear and speak boldly for our Lord. When the feast of tabernacles came around, Jesus’ family went to Jerusalem, and His brothers mockingly told Jesus to go too. Jesus told them He wasn’t going because it wasn’t time for Him to be crucified. He knew the Pharisees would try to kill Him. So, His brothers went on without Him, but then Jesus went secretly after they left. Sure enough, the Pharisees were looking for Him. The people had a lot to say about Jesus, but they wouldn’t speak openly because fear kept them silent.

The people may have been fearful, but Jesus went to the temple and taught.

“And the Jews marvelled saying, How knoweth this man letters, having never learned?” – John 7:15.

They wanted to kill Him, but still they admired His teaching.

It’s important that we respect God Almighty, and honor Him with our lives. The book of Proverbs has many verses about the fear of the Lord, and each one is the Hebrew word “yir’a”, meaning to have respect, reverence, and piety before the Lord.

“The fear of the LORD is the beginning of wisdom: and the knowledge of the holy is understanding.” – Proverbs 9:10.

Is this true? Could it be that so much craziness in this world is happening because so many people no longer fear the Lord? I think this it’s true. Solomon wrote the Proverbs, but his life wasn’t lived in fear of the Lord. He accumulated wealth and pagan wives. He gave into their desires to worship heathen gods. His kingdom began to fall apart. Knowing that Scripture teaches that having fear of the Lord means to have respect, reverence, and piety before the Lord, which is the beginning of understanding, shouldn’t we spend time studying God’s word? Yes, we should. Not only should we study it but we need to believe it and apply it to our own lives. The first two chapters of Genesis tells us that God created the heavens and the earth. The Gospel of John discloses that Jesus was the Creator. If we claim to be Christians, then we should have no questions about this. Evolution didn’t happen over millions or billions of years. What happens when the truth of creation is rejected? Let’s turn to Romans chapter one:

“Because that, when they knew God, they glorified him not as God, neither were thankful; but became vain in their imaginations, and their foolish heart was darkened. Professing themselves to be wise, they became fools.” – Romans 1:21-22.

The chapter goes on to say that because of their lack of fear of the Lord, they are drawn to homosexual perversion.

“And even as they did not like to retain God in their knowledge, God gave them over to a reprobate mind, to do those things which are not convenient;being filled with all unrighteousness, fornication, wickedness, covetousness, maliciousness; full of envy, murder, debate, deceit, malignity; whisperers, backbiters, haters of God, despiteful, proud, boasters, inventors of evil things, disobedient to parents, without understanding, covenantbreakers, without natural affection, implacable, unmerciful, who knowing the judgment of God, that they which commit such things are worthy of death, not only do the same, but have pleasure in them that do them.” – Romans 1:28-32.

Brothers and sisters, fear the Lord and turn away from rejecting His truth. Don’t condone ungodly behavior, for by doing so you are no better than participants in the depravity.

Jesus was quite clear that we should have no fear about sharing the Gospel. Today many so-called missionaries are afraid to share the Gospel without sneaking in with gifts or works, instead of straightforward sharing of God’s truth.

Jesus traveled throughout Judea and shared the Good News. Though He was a carpenter by trade, He didn’t sneak in, build and repair homes, then as a second thought mention the Gospel that He came to die for. Paul’s example of missionary work was to go first to the synagogues and speak openly and boldly, without fear.

There is a type of fear which is healthy, and that’s fear of the Lord. From Genesis chapter 1, right on through Scripture its very clear that sin is the cause of eternal death.

“For the wages of sin is death; but the gift of God is eternal life through Jesus Christ our Lord.” – Romans 6:23.

God told Adam not to eat from the tree of knowledge, but Adam ignored God’s warning and ate from that tree. Thus, sin and death entered creation. All humans are born into that sin and death. This is where the fear is a good thing.

“And I say unto you my friends, Be not afraid of them that kill the body, and after that have no more that they can do. But I will forewarn you who ye shall fear: Fear him, which after he hath killed hath power to cast into hell; yea, I say unto you, Fear him.” – Luke 12:4-5.

Jesus spoke those words, and who did He say to fear? God. It’s God who has the power to cast a sinner into eternal death. He will only do that if you’ve rejected Jesus.

Is there any hope? Yes, there is. That hope is in the death, burial, and resurrection of Jesus Christ. That faith should bring a change into your life. The 10 Commandments should be your guide, but so should Jesus’ example of love. Jesus was God incarnate. He was fully man and fully God. When He willingly went to the cross, He shed His blood for the redemption of everyone who hears the Gospel and places their faith in Him. There is no other way to find eternal life.

“For God so loved the world, that he gave his only begotten Son, that whosoever believeth in him should not perish, but have everlasting life. For God sent not his Son into the world to condemn the world; but that the world through him might be saved.” – John 3:16-17.