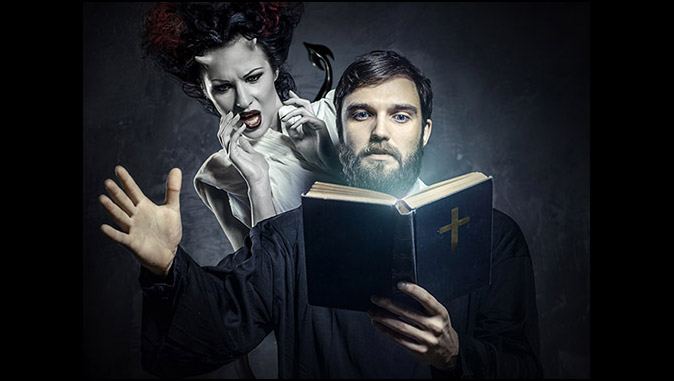 Demons and Faith
By Nathele Graham

Faith is important. Our faith in the death, burial, and resurrection of Jesus Christ is an eternal blessing.

“For by grace are ye saved through faith; and that not of yourselves; it is the gift of God: not of works lest any man should boast.” – Ephesians 2:8-9.

The problem is, many who make a confession of faith don’t really believe what they’ve confessed. Or, they choose to live by the standards of the world rather than by God’s standards. If you really stop and think about what Christ did for you, you might be more willing to live for Him, putting aside the selfishness of the human sin nature, to live to honor Christ who shed His blood for your salvation.

“I beseech you therefore, brethren, by the mercies of God, that ye present your bodies a living sacrifice, holy, acceptable unto God, which is your reasonable service.” – Romans 12:1.

It is true that nothing we do is good enough to earn our right to a place in Heaven. Only faith in Jesus and His righteousness will bring salvation.

I am always amazed when I read about the people in Scripture and realize there was nothing superhuman about them. The only difference between them and me, is that they put aside their fear in order to accomplish the task they knew God had asked then to do. For instance, Esther was just a young, pretty woman who happened to be Jewish. Through a series of events, she found herself married to King Ahasuerus. He was the rather temperamental king of Babylon. There were many Jewish families who had remained in Babylon after the days of the captivity were over, and a very hateful man named Haman desired to see all of them killed. His plan nearly succeeded, but because Queen Esther went to God in prayer, and stepped out in faith, she was able to thwart the plan.

“Go, gather together all the Jews that are present in Shushan, and fast ye for me, and neither eat nor drink, three days, night or day: I also and my maidens will fast likewise; and so will I go in unto the king, which is not according to the law: and if I perish, I perish.” – Esther 4:16.

The king could have had her killed for coming to him on her own without being summoned. Her faith was strong, and her motives were pure. As the story unfolds, God used her in a marvelous way, and the Jewish people were saved. Esther lived her faith.

The writer of Hebrews gives us a definition of faith, as well as examples of people who stepped out to serve God and make changes to the people and circumstances around them.

Faith is the difference between obedience to God, and failure to serve Him. Faith in Jesus Christ is the difference between eternal life and eternal death. The world around you may judge you by your works, and appearances, but Christ judges you by your faith. Our faith should show in our actions, and indeed it should affect the way we treat others and our attitudes. If you have a strong dislike for people and have no good things to say to people who annoy you, then you aren’t living your faith. If you only show disdain and anger when another human says something that you take to be demeaning to you, then you are showing selfish pride, and are far from living your life for Christ. It’s Satan who is governing your words and actions, not the love of God. You can combat this spiritual attack on your faith.

“Submit yourselves therefore to God. Resist the devil, and he will flee from you. Draw nigh to God, and he will draw nigh to you. Cleanse your hands, ye sinners; and purify your hearts, ye double-minded.” – James 4:7-8.

Double-minded? If you profess faith in Christ while speaking and acting in ways that represent Satan you are double-minded. You need to draw close to God and let the Holy Spirit guide you.

Sometimes we talk so much about Jesus and His love, that we begin to think that everything we do is OK. It’s true our sins are forgiven when we truly believe in His sacrifice, but that doesn’t mean we have a license to sin all we want. If you have truly placed your faith in Him, then your life should reflect that faith. Works cannot and will not bring salvation, but if there’s no change in your attitude, maybe you need to examine your true faith.

“Yea, a man may say, Thou hast faith, and I have works: shew me thy faith without thy works, and I will shew thee my faith by my works.” – James 2:18.

Don’t think that works only consists of helping old ladies across the street, or knocking on doors to share the Gospel. Works is anything you do trying to earn salvation. For instance, Christians should show grace and mercy to other people, for no other reason than it glorifies Christ. Pride of self should be set aside, and Christ’s love should rule your heart. Yes, that’s adding “works” to your faith, but living a Christ-like life is a good idea.

Don’t be deceived, you need to let the Holy Spirit live in you and through you. Anger, sarcastic words, and a disdain for fellow human beings are attitudes that don’t come from God. God is love and Satan is hate. Which one do you serve?

It’s easy to just allow your human sin-nature rule, but by doing so you aren’t honoring Christ. That makes others question whether your faith is real. You see, you might believe in your mind that God is real, but so does Satan and his minions.

“Thou believest that there is one God; thou doest well: the devils also believe, and tremble.” – James 2:19.

Look at that verse carefully. Of course, the demons believe there is one God. They live in the spiritual dimension and they’ve seen Him. But does the verse say anything about their response to Him? Does it say that they’ve asked for His forgiveness? No. Does it say they’ve accepted His death as payment for their sins? No. Does it say they’ve received Him into their heart? No. Have they repented and made peace with Him? No. All it says is that they believe there is one God. If you continue in your sin after you’ve confessed faith, then maybe your confession wasn’t honest. We can look to Scripture and see that demons are real, and they can control the actions of people. We can also see that they are no challenge to Jesus. In the Gospels we read an account of a man in Gadera who was possessed by demons. We can gain much insight from studying this event. The young man was tormented by these evil beings. He was violent and an outcast from society.

“And always, night and day, he was in the mountains, and in the tombs, crying, and cutting himself with stones. But when he saw Jesus afar off, he ran and worshipped him,” – Mark 5:5-6.

The demons who possessed the young man recognized Jesus and ran to worship Him. The demons hadn’t repented or asked for forgiveness, but they “worshipped” (gave lip service) to Jesus Jesus simply told them to come out of the man. He didn’t use “holy water” or fancy words, but only commanded them to come out of the man. They had to obey Jesus, and they entered into a herd of swine and ran into the sea. Demons recognize Jesus and trembled, but their worship wasn’t true worship, and they didn’t follow Him. Jesus knows the difference between a repentant soul and one that is just trying to get to Heaven.

Be sure you worship Christ in spirit and in truth. Time is running out and soon Jesus will call all who have earnestly called on Him for salvation, to go Home in the Rapture. When the Rapture happens, the Church-age will be over. After that, people may come to faith in Jesus, but the indwelling of the Holy Spirit won’t happen. These “Tribulation Saints” will be beheaded when their faith is made known. They are the martyrs who won’t worship the Anti-Christ or take his mark. They will wish they had truly loved Jesus prior to the Rapture. There’s no excuse for anybody to be left behind to face Hell on Earth during the Tribulation.

“And this is the will of him that sent me, that every one which seeth the Son, and believeth on him, may have everlasting life: and I will raise him up at the last day.” – John 6:40.

God doesn’t want anyone to spend eternity in the lake of fire and has given us Scripture to guide us on how to avoid eternal death. The Bible is available in any bookstore, and usually easy for most people to find a place where God’s truth is preached. If you’re a professing Christian with a bad attitude and vicious words on your lips, you may push people away from Christ instead of being the means of showing His love and drawing lost souls to Him. In Muslim nations it may be very difficult to find true Christians, but you can always pray and talk to God.

“That if thou shalt confess with thy mouth the Lord Jesus, and shalt believe in thine heart that God hath raised him from the dead, thou shalt be saved.” – Romans 10:9.

Those are comforting words. Faith is the key.

Don’t be like the demons who give lip-service but have no true faith. Jesus entered His creation to bring salvation to mankind. He became human in order to save humans. Give Him your heart and allow Him to cleanse it. People around you will hear you say you’re a Christian, but they will also hear your lips speak evil of others and watch to see if your actions honor Christ. Don’t allow the evil in the world dictate your life. Even the demons believe and tremble. Let Jesus be your example and guide.

Thank You, God, For Everything

Thank You, God, For Everything By Nathele Graham “Every good gift and every perfect gift…

Stand Firm on Faith in God

Knowing and Doing By Nathele Graham Life is a series of choices. The choices we…

What Can I Do Now?

What Can I Do Now? By Nathele Graham “But God commendeth his love toward us,…

Do You Conform to God or to the World?

Do You Conform to God or to the World? By Nathele Graham There is no…

What Are You Celebrating?

What Are You Celebrating? By Nathele Graham There’s no doubt about it. People enjoy celebrating.…