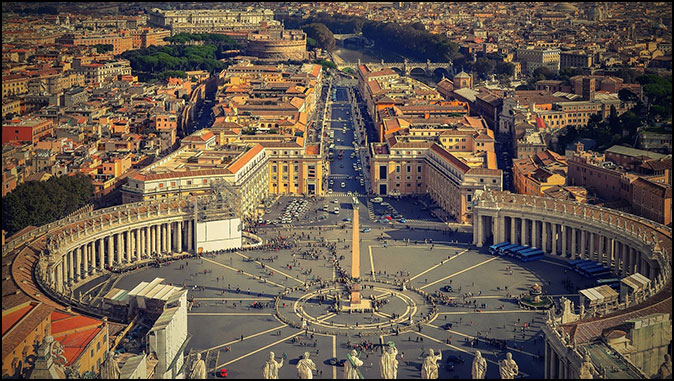 Which Catholic Pope Do Catholics Believe?
By Mike Gendron

Roman Catholics are faced with a serious dilemma. Since they have been indoctrinated to believe that their popes are infallible, they must obey their infallible teachings. “The Roman Pontiff…enjoys this infallibility…when, as supreme pastor and teacher of all the faithful…he proclaims a definitive act or doctrine pertaining to faith or morals. The definitions ‘must be adhered to with the obedience of faith'” (Catechism of the Catholic Church, para. 891). Catholics believe that the Apostle Peter was their first pope but they do not believe his definitive doctrines. Instead they choose to believe and obey the heretical teachings of Pope Francis. This should be a serious dilemma for all thinking Catholics. How can two “infallible” popes contradict each other with their infallible teachings, and how can Catholics adhere to two sets of conflicting doctrines? Consider the following examples that contrast the teachings of the Apostle Peter with Pope Francis:

• Peter was an elder who submitted to Jesus as the head of the Church (1 Pet. 5:1; Col. 1:18). He taught that Jesus was the Shepherd and Guardian of souls (1 Pet. 2:25).
• Francis believes he is the Vicar of Christ and the head of the Church, with supreme and universal power which he exercises unhindered (CCC 882).

• Peter taught we are born again through the living, abiding Word of God (1 Pet. 1:23).
• Francis teaches we are reborn through the ritual of baptism (CCC 1213).

• Peter taught a believer’s eternal salvation and inheritance is secured by the power of almighty God (1 Pet. 1:3-5).
• Francis teaches salvation is conditional because it is attained by merit and can be lost by mortal sin (CCC 2027, 1035).

• Peter warned of false teachers who would come into the church to teach heresies and malign the way of truth (2 Pet. 2:1-2).
• Francis is a false teacher and under divine curse for adding requirements to the Gospel and naming Mary as an intercessor and mediatrix of salvation (Gal. 1:6-9; CCC 969, 1129).

We must warn Catholics that Peter was not the first pope and that he was not infallible. Paul had to correct him for not being “straightforward about the truth of the gospel” (Gal. 2:11-14). However, the Word of God that Peter penned under the inspiration of the Holy Spirit is infallible and authoritative. Scripture never teaches that Peter had authority over the other Apostles, and there is no mention of the papacy anywhere in Scripture. The Lord Jesus, who purchased the church with His own blood, is the one and only head of the church (Col. 1:18; Acts 20:28). We must also warn Catholics not to trust in princes, in mortal man, in whom there is no salvation (Ps. 146:3). It is our prayer that Catholics will test every man’s teaching with the inerrant, inspired, authoritative Word of God and reject any teaching that opposes it (Acts 17:11).