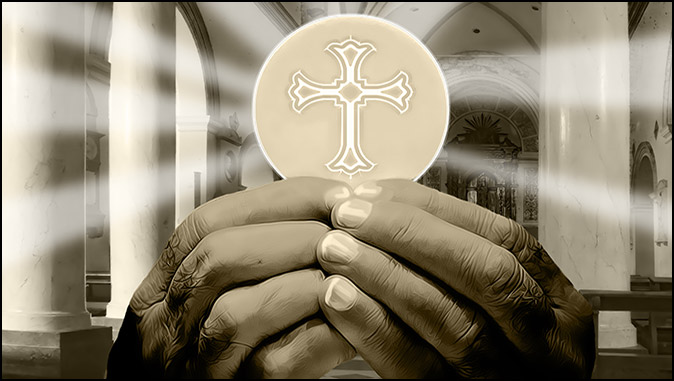 The False Christ of Roman Catholicism
By Mike Gendron

We know from God’s inspired Word that false teachers will come and preach another Jesus that the apostles never preached (2 Cor. 11:3-4). So it should not surprise us that there are many counterfeit Christs in false religions masquerading as the true Christ. By far, the most deceptive false Christ is the Eucharist of the Roman Catholic Church.

The Blasphemous Hoax That Deceives Catholics

In The Faith of Millions, a book certified by the Catholic Church to be “free of doctrinal errors”, Catholic priest John O’Brien explains how the Eucharist becomes Jesus during the Mass: “When the priest pronounces the words of consecration, he reaches up into the heavens, brings Christ down from His throne, and places Him upon our altar to be offered up again as the Victim for the sins of man. It is a power greater than that of saints and angels. The priest speaks and lo! Christ, the eternal and omnipotent God, bows His head in humble obedience to the priest’s command.”

The Outrageous Lie and its Implications

As preposterous and unthinkable as this may sound, the Catholic priest is said to have the power to call almighty God down from heaven and continue on an altar what the Lord Jesus finished on the cross (John 19:30). It is unfathomable that Catholics would believe a sinful priest can command our holy God to do anything and that God would actually obey him. Yet, over 200,000 times each day, throughout the world, priests believe they can re-present Jesus as a sacrificial victim for sins. Our Lord Jesus was immersed in the wrath of God and endured excruciating pain once for all time for all sin (Heb. 10:10,12). It is unconscionable that Catholics would want to continue His suffering on their altars. It is also dishonoring to refer to Jesus as a “victim.” He laid His life down on His own initiative as an act of sacrificial love for His sheep (John 10:18). He was a “victor” who defeated death, not a “victim.”

The Cunning Deception of Transubstantiation

The Catechism of the Catholic Church declares that through the miracle of transubstantiation, “Christ himself, living and glorious, is present in a true, real, and substantial manner: His Body and His Blood, with His soul and His divinity.” Catholics are threatened with anathema if they do not believe this nonsense. “If any one shall deny, that, in the sacrament of the most holy Eucharist, are verily, really, and substantially contained the body and blood, together with the soul and divinity, of our Lord Jesus Christ, and consequently the whole Christ; but shall say that He is only therein as in a sign, let him be anathema” (Council of Trent, Chapter 8, Canon 1). During the Catholic Mass, before the Eucharistic Christ is offered as a propitiatory sacrifice, Catholics believe they eat His body and drink His blood in Holy Communion.

Figurative Speech Must Not Be Taken Literally

You might be wondering how Catholics can possibly believe this bizarre teaching. It comes from twisting the meaning of John 6:54. Jesus said, “He who eats My flesh and drinks My blood has eternal life, and I will raise him up on the last day.” Catholic Bishops declared Jesus was speaking literally and therefore He must be eaten during Holy Communion. Yet, the Jewish audience would not have understood this because the Lord’s table had not yet been instituted by Christ. Also, If this were a reference to the Lord’s Table, it would mean that eternal life could be gained by taking Communion, which would distort the Gospel. Salvation is by grace through faith apart from anything man does (Eph. 2:8-9). Catholics do not realize how inconsistent they are to take the “eating and drinking” literally, but not “eternal life.” Their eternal destiny is conditional because it is based on what they DO rather than what Christ has DONE

The Eucharist Is a Counterfeit Christ

By the supreme authority of God’s inspired Word we know that the Eucharist is a false Christ. The Lord Jesus Christ is not physically present in a wafer.

Worshiping the Eucharist Is Idolatry

Catholics who worship the Eucharist can be compared to the Israelites who worshiped the golden calf as their true God (Exodus 32:4). The punishment imposed by God for their most serious sin of idolatry was death (Exodus 32:27-28). The same sin of idolatry is committed by Catholics who worship the Eucharist as the true Christ. Catholics must be warned that the resurrected and exalted Christ is too awesome and glorious to be captured in any image, let alone a wafer (Exodus 20:4-6). They need to know that God seeks worshipers in spirit and truth (John 4:24).

What Must We Instruct Catholics To Do?

If we truly love Catholics we must warn them of their pending peril. They must repent and “flee from idolatry” (1 Cor. 10:14). Paul warned that those who practice idolatry will not inherit the kingdom of God (Galatians 5:19-21). They need to become true disciples of Christ by abiding in God’s Word. Then they will know the truth and the truth will set them free from religious bondage and deception (John 8:31-32).