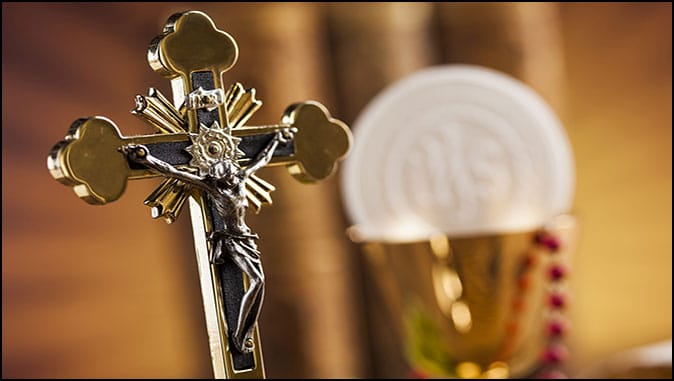 Tim Moore: The Bible has much to say about the end times and what we are to look forward to as believers in Jesus Christ. We are going to take a few moments to consider a Catholic perspective on the end times.

Mike Gendron: A couple of differences exist between what Roman Catholics believe will take place in the end times and what Protestant Premillennialists believe. Number one, we have to recognize that the Roman Catholic Church holds to an Amillennial viewpoint. That means they deny that Jesus Christ will reign for a thousand years on this earth.

The Roman Catholic Church believes that Jesus will not return to the earth again until the whole world has become Roman Catholic. This explains why their agenda focuses on creating a one-world religion. That’s why Roman Catholics are building bridges into all of the other religions of the world. There’s even an ecumenical movement among some evangelicals to unite all professing Christians under the power and influence of the Pope.

Another reason why Catholic eschatology sees end times events being different from the biblical account is because of their doctrine of Purgatory. You see, it is impossible for the Catholic Church to teach the Rapture of the saints when people are having to spend an unknown amount of time in Purgatory until their sins are purged away. So, for everyone to be resurrected at the same time, to be raptured goes against the teaching of Purgatory and completely undermines it.

Roman Catholicism also believes that there will be two major prophetic characters in the end times, similar to who we read about in Revelation 13 and 18. A false prophet will join hands with a Catholic monarch, they believe, and the two together will usher in a period of peace and prosperity. Scripture teaches that the False Prophet will wield a lot of influence over the world. He will force the world to take the Mark and worship the Antichrist.

But, in reality, who is the most influential false prophet in the world today? It has to be the papacy, whether it be Pope Francis at the time of the Rapture, or whoever comes after him. The office of the papacy holds universal acclaim and power because Catholics can be found in all of the countries of the world. And, with this global religion that the Pope is trying to initiate right now through his ecumenical movement, we can see that this global agenda to unite all the people of the world into one religion to worship a false Christ is actually happening through the Roman Catholic Church.

That’s why I have such a burden for Catholics. A Catholic who worships a piece of bread is no different than the Israelites who worshiped the golden calf as the true God. So, we need to have a sense of urgency to rescue Roman Catholics out from this false religious system that is under the condemnation of God for preaching a false Gospel.

Tim Moore: And, it’s not just Catholics who appeal to a false Gospel. We can have folks in every denomination, even within the Protestant realm, who have gotten a mindset that if they do enough good then God will accept them into Heaven. They erroneously believe that the good they do offsets the bad things they did earlier in their lives, and weighed in the balance they’ll be found okay. Works are a false Gospel that provides a false hope because all of our righteous deeds are counted as filthy rags before a holy God. So, it is only by putting our trust in Jesus Christ, in His righteousness, that we are credited with righteousness by God the Father, and brought into the heavenly realm of eternity with our Savior. And so, it doesn’t matter whether you are Catholic, Baptist, Methodist, Presbyterian, or anything else, we all have to trust in Jesus Christ as our all-sufficient Savior and worship Him as our Lord, obeying Him because His righteousness is imputed on us.

Mike Gendron: Right! In fact, I carry such a great burden for all who believe they can merit their way into Heaven. My ministry offers a gospel tract entitled, “You Can Never Do What Christ Has Done.” We have to trust in the finished, all-sufficient work of Christ, and that means leaving all of our filthy rags of righteousness — our good works — behind. We cannot do what Christ has already done — provide the final sacrifice for our salvation from the just punishment of our sins.

Tim Moore: To think that I could add to what Christ has done is almost insulting to the finality of Jesus’ sacrifice on the cross. It’s very important that we make it as clear as possible that the sacrifice of Jesus Christ and the power of His person was proven by His own resurrection, meaning that there’s nothing else that mankind can do to come to the Father. In order to be brought to Heaven and enjoy a glorious eternity with God Almighty means we must place our faith in Jesus Christ alone. We pray that you will do that right now.