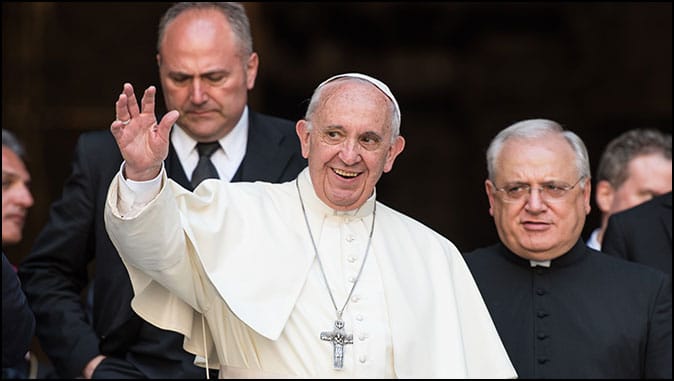 Prophetic Perspectives: Is the Pope Catholic?
By Col. Tim Moore

Tim Moore: Pope Francis has been giving fits to devout and orthodox Catholics, which begs the question: “Is the Pope Catholic?”

I’ve asked this question of Mike Gendron of Proclaiming the Gospel Ministries. Mike is a former Catholic and now a very outspoken Evangelical Christian. I’d like to point out a few of the rather stunning statements that Pope Francis has said in recent years and then get Mike’s thoughts and commentary.

To start, Pope Francis has said, “Atheists who do good are redeemed, not just Catholics.” He also said, “If someone is gay and is searching for the Lord and has done good, then who am I to judge him?” He went on to say, “God is not divine or a magician.” He also said, “The Big Bang Theory does not contradict the role of God as Creator.” And, “If Martians were to land on earth tomorrow, I would offer to baptize them.” And on and on.

Some of his statements sound kind of half-baked, and some of them are just absolutely unbiblical. What is the Pope thinking?

Mike Gendron: You’ve brought up some interesting quotes. I think the Pope is questionable whether or not he is truly a Catholic because he actually stands opposed to historic Roman Catholic teaching, not only to the Bible, but also to Catholic teachings. Some of the quotes that you brought up all point to the fact that Francis is a Universalist. He believes that everyone is a child of God, even that Atheists will go to Heaven. He’s even denied the existence of Hell.

These statements show that Pope Francis holds to a Globalist’s agenda with its purpose to unite all of the religions of the world and institute a global government. We can see that the Pope is a Universalist, even denying that there will be anyone in Hell. When you look at the works-righteousness salvation that the Catholic Church teaches, it’s in unison with all of the other religions of the world that also teach works-righteousness salvation.

In contrast, biblical Christianity is set apart. We believe that Christ alone has done everything necessary to save sinners completely and forever. And so, we repent of our dead works and we put all of our faith in an all-sufficient Savior. This foundational biblical teaching goes against the Pope’s Universalist theology.

I want to point out that we are not here to bash Pope Francis or Catholics in general, rather we are here to point to the truth of the Word of God and to Jesus Christ as the Way, the Truth, and the Life which leads to God the Father. But, the Pope makes it very obvious that if you start muddying the waters of biblical doctrine — what the Christian faith really stands on — then many people will go astray.

The Pope has very famously in recent years been giving a wink and a nod to homosexuality and to same-sex marriage. He actually said, “Homosexuals have a right to be part of the family. They are children of God and have a right to a family. Nobody should be thrown out or to be made miserable because of it.”

These signals, which were oftentimes walked back by a Vatican spokesman, give an indication of the Pope’s intentions. Many came away thinking that he was actually endorsing homosexual marriage. As a matter of fact, some of the bishops in Germany were already creating sacraments of blessing and vows for same-sex marriages. Very recently, one of the Catholic hierarchy committees came out with what they call a dubium, a proclamation, that said, no, the Catholic Church will not endorse homosexual marriage, and the Pope had to agree. But, boy, has he created a mess with some of his statements!

Mike Gendron: Pope Francis has redefined what marriage and family is. He’s not only talking about homosexuals being saved, but he says that he is all for civil unions between homosexuals. That’s redefining the family, which goes against the Bible, and which very clearly stands against the sin of sexual impurity.

We also know from the Bible that not everyone is a child of God. We see in scriptures, such as John 1:12-13, that those who believe in the Son of God are given the right to become children of God. God adopts certain people into His family as His children, and they are only those who repent and believe the Gospel. The Pope clearly doesn’t know the Bible, and so he goes against a lot of what the Word of God has to say.

Tim Moore: Christians should always point to the inerrant, authoritative Word of God as our only source of truth. Look at Jude who said, even though he wanted to write to particular Christians he ended up scripting a letter about the Gospel to us all, that he felt it was necessary to write an appeal to them to contend for the faith which was once and for all handed down to the saints.

The Pope and others in the Catholic hierarchy are really purporting to call people into a religion and not a relationship with their Savior. Jude goes on to point out that the faith that was handed down is a faith in Jesus Christ. Jude then warned, “For certain persons have crept in unannounced, those who were long before marked out for this condemnation, ungodly persons who turn the grace of our God into licentiousness and deny our only master and Lord Jesus Christ” (Jude 1:4).

Therefore, all of these other gospels, such as Universalism, are actually false gospels. Unless they point to our Lord and God, our all-sufficient Savior Jesus Christ, then they are false gospels that lead people to Hell.

Mike Gendron: That’s right! I love what Jude exhorted us all to do, “to contend earnestly for the faith.”. Not passively, not whenever you feel like it, but earnestly. After all, constant attacks wage war against the Gospel of Jesus Christ.

Look at when Jude was written. The Gospel and the faith that we uphold were signed, sealed, and delivered in the First Century. So, anything that comes after the First Century that opposes the faith of the Christians in the First Century, that is what we are to contend against. When you look at Roman Catholicism, it has added so many new teachings to the Word of God. It has distorted the Gospel by adding certain requirements in order to be saved, including water baptism, the sacraments, participating in the Sacrifice of the Mass, and obeying the Law. Doing so puts Catholics under a curse. It teaches a different gospel. So, as Christians, we are to contend against the false gospel of the Roman Catholic Church as well as any other gospels that deviates from biblical truth.

Tim Moore: Whether you have a background in Roman Catholicism, or whether you call yourself a Baptist, a Methodist, a Presbyterian, or anything else — the only question is not whether you have been good enough or done enough works to offset the bad deeds in your life. The only question is, have you placed your faith in Jesus Christ, your all-sufficient Savior? Do you trust that Christ’s blood covers all of your sins and no one else but Jesus can save you from the just punishment of Hell.

Mike and I pray that you have embraced Jesus Christ as your Lord and Savior today. Godspeed!

Which Catholic Pope Do Catholics Believe?

Which Catholic Pope Do Catholics Believe? By Mike Gendron Roman Catholics are faced with a…