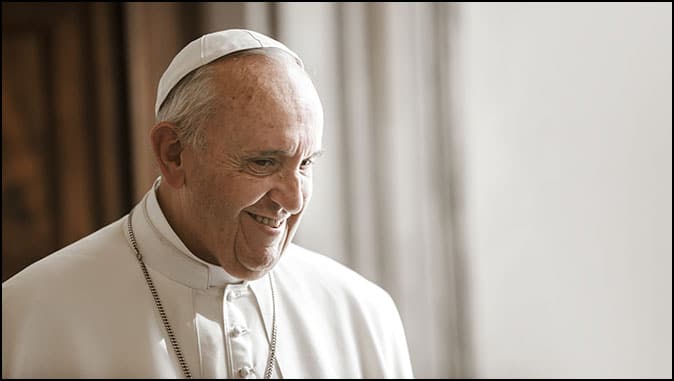 Is the Pope Catholic?
By Mike Gendron

Pope Francis has become the most controversial pope in the last 300 years. He has made numerous contentious and disputable statements that not only go against historic Roman Catholicism, but they also violate the infallible Word of God. Tragically, his fatal lies often go unchecked and are leading millions of people down the wide road to destruction (Matthew 7:13). As the first Jesuit pope, he rules over 1.3 billion Roman Catholics, who have been indoctrinated to believe that any man who wears the papal crown is holy and infallible when he speaks ex cathedra. We must warn Catholics with the sobering words of Christ, “Beware of the false prophets, who come to you in sheep’s clothing, but inwardly are ravenous wolves” (Mat. 7:15).

Is the Pope Humble?

Pope Francis is loved by many because of the “humility” portrayed by his foot-washings and self-described humble lifestyle. However, can he really be humble when he usurps the honor and authority of the Lord Jesus by stealing His title as the Head of His Church? Francis never suffered the physical torment, the spiritual abandonment and a sacrificial death to save the Church. That he would consider himself to be the Head of the Church is unconscionable. Yet, his arrogance does not end there. He has also usurped the title “Holy Father” from the one and only Holy Father who is the Father of Jesus and all born-again Christians (John 17:11).

Is the Pope a Universalist?

In spite of the clear teaching of Christ and His Word, Pope Francis believes God’s will is to save all people. During a message in St. Peter’s Square, he said, God “wants His children to overcome all particularism in order to be open to the universality of salvation” (CNA, 11/15/19). Years earlier, Pope Francis declared: “The Lord has redeemed all of us, with the Blood of Christ: all of us, not just Catholics. Everyone…even the atheists. Everyone! The Blood of Christ has redeemed us all” (RNS, 5/22/13). The pope’s belief that everyone will be saved is not only opposed to the teachings of his church but also to the very words of Christ. The Lord Jesus made it clear that very few will enter Heaven, and the greater majority will end up in a place of destruction. He said we must “enter through the narrow gate; for the gate is wide and the way is broad that leads to destruction, and there are many who enter through it. For the gate is small and the way is narrow that leads to life, and there are few who find it” (Matthew 7:13-14).

Is the Pope a Denier of Hell?

Not only has Pope Francis said everyone will eventually be in Heaven, but he also stated, “There is no hell where sinners suffer for eternity.” He added to his heresy by saying: “After death, those who do not repent cannot be pardoned, and they disappear.” Then he declared, “Hell does not exist but what does exist is the disappearance of sinful souls.” One can only conclude that the pope is calling Jesus a liar because He spoke of hell more than thirty times in the New Testament. God’s Word describes hell as a place of torment where unbelievers suffer pain and thirst from a burning fire. The horror and hopelessness is so great that they want to warn their loved ones who are still alive. The punishment for their sins is irreversible; there is no second chance and no escape (Luke 16:19-31). The pope’s denial of hell also opposes Roman Catholicism, which affirms the existence of an eternal fire in hell where sinners suffer (Catechism of the Catholic Church, para. 1035).

Is the Pope Against the Sanctity of Marriage?

The recent endorsement of same-sex civil unions by Pope Francis has been criticized by conservative Catholics throughout the world. God’s timeless Word reveals His holy intentions for marriage, family and sexuality as well as His clear condemnations for those who violate His intentions. No one, not even a pope, has the authority to redeﬁne marriage, family and sexuality. The ﬁrst family consisted of a male husband and a female wife, along with their children.

Is the Pope Ever Right?

Pope Francis was wrong again when he said, “All of us are God’s children.” The Lord Jesus exposes the pope’s lie by revealing some people are children of the devil. To the apostate religious leaders He said, “You are of your father the devil” (John 8:44). Later, the apostle John wrote: “It is evident who are the children of God, and who are the children of the devil: whoever does not practice righteousness is not of God, nor is the one who does not love his brother” (1 John 3:10). The pope was also wrong biblically when he declared Mary is the one mediator between God and man (1 Tim. 2:5). He said, “Mary is not only the bridge joining us to God; she is more. She is the road that God travelled to reach us, and the road that we must travel in order to reach Him.”

Pope Francis blasphemed God by attributing the work of Jesus Christ to Satan when he declared that the “Division [among evangelicals and Catholics] is the work of the Father of Lies who does everything possible to keep us divided.” The pope’s statement opposed and denigrated God’s infallible Word. The Lord Jesus is the One who divides believers from unbelievers by the truth of His Word (Luke 12:51-53).

The pope also blasphemed God by saying He is going to destroy the world again because of global warming. He said this time the Genesis flood won’t be mythical, (like he seems to believe of the Genesis flood); it will be real. His distortion of Genesis continues with his statement: “The Big Bang Theory does not contradict the role of God as the divine creator.” He said, “God is not a divine being or a magician, but the Creator who brought everything to life.”

Is There Anything Christians Can Do?

Pope Francis has become the most influential and dangerous false teacher in the world today. It is my prayer that Christians will recognize the Roman Catholic religion is a huge mission field and rescue Catholics from Pope Francis. Only the truth of God’s Word can set Catholics free from the bondage of religious deception (John 8:31-32). We must speak the truth in love and pray for the salvation of these precious souls!