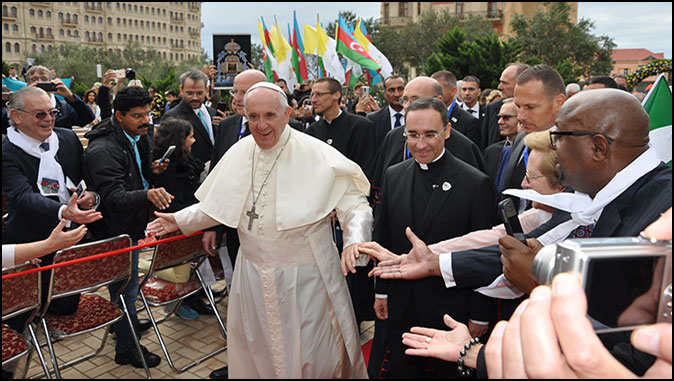 Recent polls show that a majority of Americans seem to have lost faith in President Joe Biden. His approval ratings have dropped and many believe he is taking the country in the wrong direction. Many conservatives believe that he is destroying America. And some believe that he is doing so deliberately.

Ironically, the world’s other best-known progressive Catholic — Pope Francis — is prospering in the polls. A recent poll of Catholics by The Pillar, a Catholic news organization, found that American Catholics put more trust in the Pope than in their local bishop or in American bishops taken as a group.

This is ironic because there are very few issues on which the pope and the president disagree. The policies they endorse are remarkably similar. Whether the issue is climate change, fossil fuels, vaccine mandates, immigration, Islam, China, Iran, or socialism, there is hardly an iota of difference between the two.

Moreover, the two men seem to have formed a mutual admiration society. Biden keeps a photo of the Pope and himself in the Oval Office, and the Pope has, in effect, taken Biden’s side against the United States Conference of Bishops on the issue of whether Biden should be denied communion because of his endorsement of abortion. Biden even claims that during their recent meeting in Rome, Pope Francis said he “was happy that I was a good Catholic and I should keep receiving communion.”

But if the polls can be believed, Biden has now fallen out of favor with voters. The question is, why is Francis still riding high? To anyone who has paid attention to Pope Francis’ career, the amount of trust placed in him by the Catholics who were polled is astonishing. Equally surprising is that Catholics who go to Mass at least once a week expressed the highest amount of trust.

This trust can be explained in part by the media’s positive treatment of Francis, and in part by simple ignorance. For many church-going Catholics, the most important thing that they know about Francis is that he is the pope. And most pious Catholics tend to have a built-in bias in favor of whoever happens to be pope.

Yet, as I have mentioned, the Pope’s political and social views are largely indistinguishable from Biden’s. And, for the most part, his positions on the issues are just as radical as Biden’s. For example, on the issue of immigration, both men hew to an extreme knock-down-the-borders-and-let-them-all-come-in position. And they do so with hardly any regard for the harmful consequences to the host country or to the migrants themselves.

Arguably, the Pope is the more radical of the two. He continues to be one of Europe’s biggest boosters of mass migration long past the point where it became obvious to the majority of European’s that mass migration has been a disaster.

Does the Pope want a disaster? Does he think, along with other elites, that Europe is in need of a population replacement? That’s hard to say. But there’s a good deal of evidence now that Francis wants to replace the Catholic Church with a new model — one that is more modernist, more humanist, more in touch with the times. In short, a Church that is less God-centered and more man-centered: a Church that is more pastoral and less — far less — doctrinal.

Considering that Catholics are already far less doctrinal than they were only a few decades ago, one wonders how much more dilution of doctrine the Church can afford. The recent Pillar poll shows that a majority of Catholics born after 1980 no longer believe in the Real Presence of Christ in the Eucharist. Other polls reveal that many Catholics no longer agree with Church teachings on contraception, abortion, homosexual marriage and hell.

The answer that an increasing number of Catholics are coming to is that Francis doesn’t like the Church as it has been constituted for the last 2,000 years. Although he has a great deal of tolerance for a great many things, Francis has no patience with traditional Catholics. He continually berates them as “rigid,” “dogmatic,” “fundamentalists” who are allied with the Devil (Francis still believes in Satan) against him.

Just as many Americans are coming to the conclusion that Biden is destroying America, a small but growing number of Catholics believe that Francis is destroying the Catholic Church. Moreover, they believe that he is deliberately attempting to destroy it.

What evidence do they offer? The first thing they point to is the increasing confusion among Catholics about what they are supposed to believe. Francis says one thing, and then he says the opposite. He says one thing in public and then something quite different in private. Unlike our muddled-minded president, however, the Pope himself is not confused. When he sows confusion, he does it in a calculated way. He may be lacking in theological profundity, but several authors who have written about his rise to power describe him as a crafty, even Machiavellian thinker.

But the Pope’s agenda is revealed more in what he does than in what he says. Just as the intentions of Joe Biden (and/or his handlers) can be best discerned in who he appoints, so can the intentions of the pope. Like Biden’s appointments to high office, Francis’ appointments seem to be calculated to undermine the mission of the posts to which they are assigned. As I suggested elsewhere, if the pope appointed the head of Amalgamated Coal Mines to lead the Vatican Commission on Climate Change, we would be justified in assuming that he didn’t really care about saving the environment.

But take a look at some of the people he has put in charge of institutions and commissions whose charge is the social environment:

– In 2017, Francis appointed Archbishop Vincenzo Paglia as the Chancellor of the John Paul II Pontifical Institute for Studies of Marriage and the Family. Up until then, Paglia was best known for commissioning a billboard-size homoerotic mural for his cathedral Church. Paglia himself appears in the mural embracing another man. As I wrote at the time: “So, at a time of great confusions about sexual morality, the man that Francis picks to instruct Catholics about marriage and family is a connoisseur of homoerotic art.”

– More recently, Francis appointed Msgr. Phillippe Bordeyne as the new president of the John Paul II Family Institute. Bordeyne had this to say about his mission: “We theologians cannot continue to assert certainties about the family when we see the transformation it is undergoing today.” Moreover, Bordeyne wants to update John Paul II’s teachings about human sexuality to include “atypical forms and expressions.” Undoubtedly, Bordeyne hopes that these “atypical” forms will soon become more typical.

– In 2016 Francis created the Dicastery for Laity, Family and Life, and put Bishop (now Cardinal) Kevin Farrell in charge. Although “the pastoral care of the family” is part of the core mission of the dicastery, Farrell seems most interested in the LGBT “family.” He invited decidedly pro-gay Fr. James Martin to be a featured speaker at the 2018 World Meeting of Families in Dublin. He also wrote a positive blurb for a book by Martin. A protégé of the notorious Cardinal Theodore McCarrick, Farrell once shared an apartment with McCarrick for six years.

One can only assume that the 85 percent of Catholics who gave their vote of confidence to Pope Francis, don’t know about these appointments.

One can also assume that there is much more that they don’t know about Francis. The designers of the Pillar survey said they asked the questions about trust because of “a nearly constant flow of recent revelations relating to sexual abuse within the Church.” And they added, “We found that trust surprisingly high.”

Yes, it is surprising. Once again, the poll respondents may have been misled by media reports, many of which gave the impression that Francis was doing his best to combat clergy sex abuse.

In reality, Francis did everything he could to avoid the issue. When he finally convened the long-heralded clerical sex abuse summit in Rome in 2019, he appointed pro-LGBT Cardinal Blasé Cupich of Chicago to steer the proceedings, and Cupich managed to steer the discussion away from the hot button issue of active homosexuality among clergy and bishops.

Did Francis really want to uncover the full truth about sexual abuse and abuse coverups? The appointment of Cupich suggests that he did not. Cupich was known to be solidly in the LGBT camp; moreover, he himself had been accused of covering up instances of clerical sex abuse in several different dioceses.

But, then, so has Francis. In the summer of 2018, Archbishop Carlo Maria Vigano, a former papal nuncio to the United States, wrote an 11-page “Testimony” in which he accused Pope Francis (and several other high-ranking prelates) of covering-up Cardinal Theodore McCarrick’s history of sex-abuse. Curiously, Francis never replied to the bombshell accusation. As suggested by the many Catholics who seem to have never heard of Archbishop Vigano or the accusation, that turned out to be a successful strategy.

In January 2017, LifeSite News published an article listing “Six cases where the sex abuse scandal touches Pope Francis.” The first case is particularly interesting because it gives an insight into the kind of company Francis keeps.

In 2012 the Congregation for the Doctrine of the Faith (CDF) defrocked Fr. Mauro Inzoli who was accused of molesting several children, including in the confessional. However, Pope Francis reversed the decision in 2014 and reinstated Inzoli as a priest. This was done at the request of Cardinal Francesco Coccopalmerio, a friend and close confidante of the Pope. However, it turned out to be a bad move since Inzoli was subsequently sent to prison for his crimes by civil authorities.

Coccopalmerio himself came to the attention of authorities in 2017 when Vatican police found him presiding over a drug-fueled homosexual orgy in a Vatican apartment which belonged to his homosexual secretary, Monsignor Luigi Capozzi. The police ordered Coccopalmerio to leave before they arrested Capozzi and others. This may or may not have been an attempt to save face for Francis. However, the Pope was already indirectly involved in the apartment affair. It was Francis himself who had intervened to be sure that the apartment went to Capozzi rather than to the secretary for Cardinal Mueller, the conservative prefect of the CDF.

Ordinarily, it’s commendable to go to bat for one’s friends, but not when the intervention enables the friend to continue in his wayward ways. Francis, however, has a habit of covering for sexually compromised prelates, and even of elevating them to plum positions.

For example, despite a history of sordid sex scandals, Monsignor Battista Ricca, a trusted friend of Francis, was appointed to be Prelate of the Vatican Bank. Ricca was also put in charge of the Casa Santa Maria guest house (where the Pope resides). Since both positions are highly sensitive, Ricca hardly seemed the man for either job. Ironically, the justification for appointing the scandal-ridden priest to the Vatican Bank position was that he would help to reform the scandal-ridden institution.

Another friend of Francis who benefitted from papal indulgence is Argentine bishop Gustavo Zanchetta. Francis, who was at one time Zanchetta’s spiritual advisor, transferred Zanchetta to Rome after the bishop was accused of “aggravated continuous sexual assault” of two seminarians in his diocese. Despite the fact that Zanchetta was also accused of fraud and mismanagement of diocesan funds, Francis then appointed him to a newly created post at the Central Vatican Bank (not to be confused with the Vatican Bank—the one that Battista Ricca was supposed to reform).