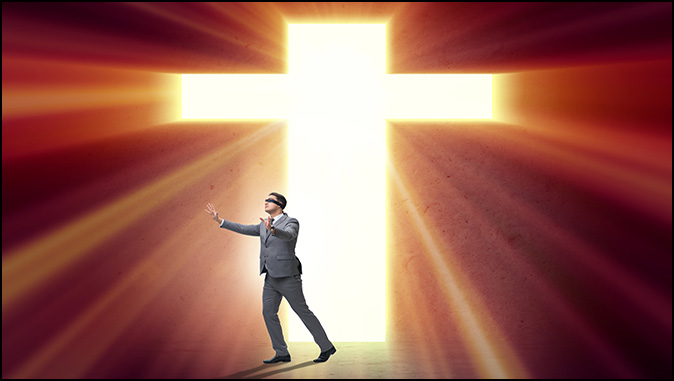 Blinded From the Light of the Gospel
By Mike Gendron

God’s inspired Word warns us that Satan is blinding unbelievers from the light of the Gospel and the glory of our Lord Jesus Christ. Paul writes, “if our gospel is veiled, it is veiled to those who are perishing, in whose case the god of this world has blinded the minds of the unbelieving so that they might not see the light of the gospel of the glory of Christ, who is the image of God” (2 Cor. 4:3-4). Satan knows man’s greatest problem is sin and his only hope of deliverance from God’s wrath is through the Gospel of Christ. That is why the Father of Lies uses everything in his power to keep unbelievers blinded from the saving power of the Gospel (Rom. 1:16).

There are many devices God’s adversary uses to keep unbelievers in darkness, but his most powerful tool may be religious indoctrination. When I was catechized as a young Catholic boy, I was pressured into submitting my mind, intellect and will to the “infallible” teachings and traditions of the “one true church.” I did not know the Gospel because it was veiled under layers and layers of religious tradition. The light of the Gospel remained veiled because Catholic priests told me the Bible was too difficult to understand, so I never opened it until age 35. The veil of blindness that covered my heart remained until months later when I turned to Christ (2 Cor. 3:14-16). Most Catholics have had similar experiences. From the time they could think as little children, their minds were taken captive to errant religious teachings and traditions. As they grew older, many of them developed a fierce loyalty to their religion and refused to exchange it for a relationship with the one true God.

Religious pride is another device Satan uses to veil the Gospel from those who are perishing. This type of haughtiness flows from a fierce, unbending loyalty to a person or institution. It is for this reason many Catholics refuse to engage in spiritual conversations with Christians. Their spiritual arrogance arises from the erroneous teaching that the Catholic Church is the one true church and necessary for salvation (CCC, 846). Their refusal to consider the Gospel of grace arises from the fear of forfeiting their salvation if they were ever to leave the Catholic Church. The same paragraph 846 teaches that Catholics cannot be saved if they do not remain in the Catholic Church.

A Tragic Example of Religious Pride

I witnessed this religious pride in my uncle, a Catholic priest of 61 years. He spent 30 years in Burma (Myanmar) converting Hindus and Buddhists to Catholicism. When he returned to America, I always looked forward to sharing God’s Gospel with him. Sadly, each and every time, he rebuked me with a condescending attitude for questioning his priestly position of authority. Blinded by religious pride, he dismissed my references to God’s Word because of a stubborn confidence in his priestly rituals and rites. Clearly, his religious arrogance was the greatest obstacle that prevented him from coming to Christ with genuine saving faith. Instead, he was content to continue offering the same daily sacrifices which can never take away sin (Heb. 10:11).

The ongoing battle for the souls of men is ultimately a conflict between the eternal truths of God’s Word and the fatal lies of the devil. Satan does a masterful job of creating a variety of works-righteousness religions to control people and conceal God’s Gospel of grace. He knows that anyone who adds works to God’s saving grace has nullified the only way of salvation (Rom. 11:6). The Father of Lies uses his deceitful workers, disguised as servants of righteousness, to control people with religious rituals for the purpose of appeasing their gods (2 Cor. 11:14-15). The only way they can escape from the snare of the devil, who holds them captive to do his will, is through a knowledge of the truth (2 Tim. 2:26). Only the truth of God’s Word can set them free (John 8:31-32). Yet, the greatest obstacle to learning the truth is to believe that you already know it.

There Is a Cure for Spiritual Blindness

Supernatural blindness can only be overcome by the sovereign work and power of the Holy Spirit. When the Word of God is proclaimed, and the Spirit of God does His work of conviction and illumination, men will see the light of the Gospel (John 16:8-11, 13-15; 1 Cor. 2:12). It is God who shines “in our hearts to give the light of the knowledge of the glory of God in the face of Jesus Christ” (2 Cor. 4:6). By God’s amazing grace, believers are delivered from the power of darkness into the glorious light of God’s kingdom. May God give us all a greater compassion for those who are where we once were!