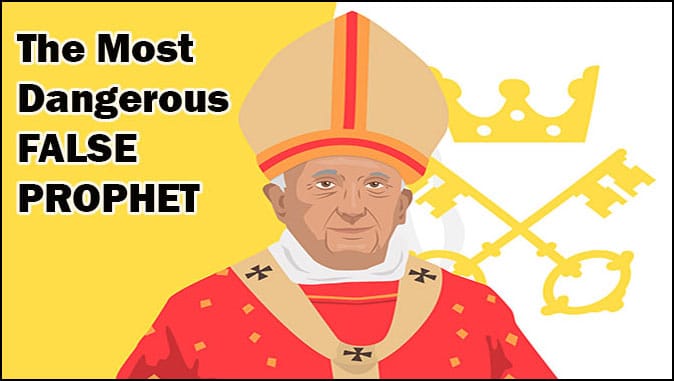 Beware of the Most Dangerous False Prophet
By Mike Gendron

In His sermon on the mount, our Lord Jesus Christ warned us to “Beware of the false prophets, who come to you in sheep’s clothing, but inwardly are ravenous wolves” (Mat. 7:15). They will direct people away from the narrow gate that leads to eternal life with Jesus and point them to the wide gate that leads to destruction in hell (Mat. 7:13-14). This is the most wicked and treacherous evil that false prophets ever commit. Many precious souls are dying every day, believing they were heaven bound, only to find themselves in the inescapable fires of hell.

The Nature of Deception

This article was not written to be unkind to Catholics but to present the truth in love with the hope they will be challenged to examine their faith through the lens of Scripture (2 Cor. 13:5). The nature of deception is such that no one knows they are deceived until they are confronted with the truth. Tragically, many will perish having never been confronted with the truth of God’s infallible Word and His Gospel.

The most influential and wicked false prophet in the world today is Pope Francis, who is leading 1.3 billion Catholics down the wide road to destruction. Like his father the devil, he blinds people from “the light of the Gospel of the glory of Christ” (2 Cor. 4:4). Like the devil, he holds his followers captive with a false gospel of works that is under divine condemnation (Gal. 1:6-9; 2 Tim. 2:26). The pope blinds them from the glory of Christ with a counterfeit Christ who returns daily, beckoned by the call of Catholic priests. This false Christ is worshipped in the Eucharist and sacrificed as a sin offering, an ungodly continuation of the work of redemption that the true Christ finished on the cross (John 19:30).

Blinded From the Glory of Christ

You might be wondering how “infallible” popes came up with such nonsense. It is based on the following preposterous hoax that blasphemes the Lord Jesus Christ. “When the priest announces the words of consecration, he reaches up into the heavens, brings Christ down from His throne, and places Him upon our altar to be offered up again as the Victim for the sins of man. It is a power greater than that of saints and angels. The priest speaks and lo! Christ, the eternal and omnipotent God, bows his head in humble obedience to the priest’s command.” This scandalous quote is from the Faith of Millions, a book that carries the imprimatur and Nihil Obstat of the Vatican.

Deceitfully Disguised as an Apostle of Christ

Pope Francis, and all his predecessors, are not only false prophets, they are false apostles, deceitful workmen, who disguise themselves as apostles of Christ (2 Cor. 11:3). Francis claims to be the Holy Father with supreme and unhindered authority over all people (CCC, para. 882). He also usurps the honor and authority of the Lord Jesus and steals His title “Head of the Church,” the church He purchased with His own blood (Acts 20:28). The pope not only has the spirit of antichrist as evidenced by his lies and heresies concerning our Lord Jesus Christ, he has also made many pronouncements that oppose historic Roman Catholicism.

Following are several of the pronouncements made by Pope Francis, which prove beyond a doubt that he is a false prophet with the spirit of antichrist.

Jesus “made himself sin and made himself the devil, the serpent, for us; he debased himself to the point of totally annihilating himself.” (L’Osservatore Romano, 4/4/17)

“There is no Hell” and “there is no punishment [for the lost soul], but the annihilation of that soul… with the death of the body their journey is finished.” (Veritas Vincit, 3/29/2018)

“I would be willing to baptize aliens if they came to the Vatican. Who are we to close doors to anyone — even Martians?” (The Atlantic, 5/12/14)

”The Lord has redeemed all of us, all of us, with the Blood of Christ, all of us, not just Catholics. Everyone! Even the atheists.” (Millennial, 5/22/13)

“Many think differently or seek God in different ways, but there is only one certainty: we are all children of God.” (National Catholic Register, 1/7/16)

“God is not a divine being or a magician, but the Creator who brought everything to life. Evolution in nature is not inconsistent with creation, because evolution requires the creation of beings that evolve.” (USA Today, 10/14)

“The issue for those who do not believe in God is to obey their conscience.” (Independent, 10/5/15)

“The death penalty is inadmissible.” This heresy opposes God’s Word (Genesis 9:6) and the Catechism of the Catholic Church. (Vatican News, 10/13/17)

Only the Truth Can Set Catholics Free

Tragically, Catholics who are not abiding in God’s Word, cannot discern truth from error and are easily deceived They cannot discern between the all-sufficient Savior who offered Himself once for all sin, from an imposter who is offered every day by a sinful priest. Catholics cannot discern the true Gospel, that offers eternal life, from a false gospel, that offers only conditional life and a false hope. The only way Catholics can be set free from religious deception is to abide in God’s Word to learn the truth that will set them free (John 8:31-32).

Which Catholic Pope Do Catholics Believe?

Which Catholic Pope Do Catholics Believe? By Mike Gendron Roman Catholics are faced with a…