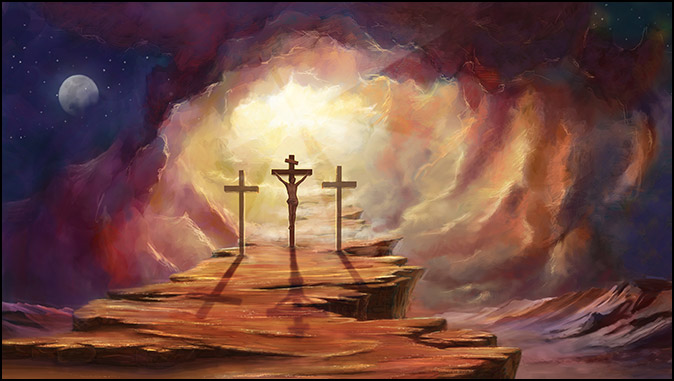 Have you ever considered how antithetical statements in the Bible can be used to bring clarity to the Gospel? Antithetical assertions are effective because they help people see contrasting consequences. Just as a diamond sparkles brighter when it is laid on a black cloth, the Gospel shines brighter when contrasted with the darkness of sin and deception. There are many antithesis’s revealed in God’s Word, including Christ and Antichrist, advocate and adversary, believers and unbelievers, eternal life and eternal death, light and darkness, justification and condemnation, truth and error, righteousness and lawlessness, the church and the world, regenerate and unregenerate men, heaven and hell, and children of God and children of Satan.

Death vs. Life and Man’s Wages vs. God’s Gift

One of the most powerful and consequential uses of antitheses is found in Romans 6:23. “For the wages of sin is death, but the free gift of God is eternal life in Christ Jesus our Lord.” In this verse, “wages” is contrasted with “gift”, and “death” with “eternal life.” These are powerful antithetical words that are direct opposites. God’s free gift of grace is not something anyone can earn as a wage for our works. Instead, Paul presents man as effecting his own death by the wages of sin. However, God offers man eternal life by His grace, which is totally free of man’s merit. The law of antithesis is used by the Holy Spirit to show the helpless state of sinners and the incomprehensible grace of God. Paul repeats the antithetical assertion that God’s saving grace must be exclusive of man’s works in Romans 11:6. “If it is by grace, it is no longer on the basis of works, otherwise grace is no longer grace.”

Salvation Is All of God and Not of Man

Two verses that have set so many Roman Catholics free from the bondage of religious deception are Ephesians 2:8-9. “For by grace you have been saved through faith; and that not of yourselves, it is the gift of God; not as a result of works, so that no one may boast.” Paul destroys the false teaching of a works-based salvation by declaring salvation is all of God and not of man. Salvation is by God’s grace through faith in what God has done, not by works man must do, so that no one may boast. In Titus 3:5, Paul uses antithesis again to destroy a works-righteousness salvation. “He (God) saved us, not on the basis of deeds which we have done in righteousness, but according to His mercy, by the washing of regeneration and renewing by the Holy Spirit.”

As we witness to Catholics, it is effective to show how biblical doctrines are diametrically opposed to Catholic dogmas. I also have found it highly effective to juxtapose contrasting statements when I teach and write. Many of our subscribers appreciated my article that contrasts two men Roman Catholics call “infallible” popes: Peter vs. Francis. The teachings of these two men could not be more diametrically opposed. Clearly, God’s Word shines brighter when it is laid side by side against the lies of a false prophet.

Which Jesus Do Catholics Trust?

The apostle Paul warned that some would come and preach another Jesus whom the apostles did not preach (2 Cor. 11:4). Have you ever considered how antithetical the Jesus of the Catholic Church is with the true Jesus who is gloriously revealed in Scripture? Consider the Lord Jesus Christ of the Bible as He is juxtaposed against the false Christ of the Catechism of the Catholic Church (CCC).

• Jesus redeemed believers from the curse of the Law, having become a curse for us (Gal. 3:10).
• Rome’s false Christ requires Catholics to obey the law to attain salvation (CCC, 2068).

• Jesus is the only Way to the Father in heaven (John 14:6).
• Rome’s false Christ is not the only way. Rome declares Muslims, who reject Jesus as God and deny that He died on the cross, are part of God’s plan of salvation (CCC, 841).

Using these points and counterpoints can be very effective in warning Catholics that they need to know the true Christ and His all-sufficient, finished work of redemption. They need to know that the Eucharistic Christ is a false Christ and to worship the Eucharist is the terrible sin of idolatry. It is no different than the Israelites worshipping the golden calf as the true God that delivered them out of Egypt. God had 3,000 Israelites put to death for the blasphemous sin of idolatry (Exodus 32:28).

At the end of time, the Good Shepherd will divide the sheep from the goats. The human race will be divided in two groups throughout all eternity. Some will enter into the joy of eternal life with their Savior; others will depart into eternal punishment (Matthew 25:31-46). This should motivate us all, with a sense of urgency, to lovingly confront people with the truth of the Gospel. People will never know they are deceived until they are confronted with the truth!