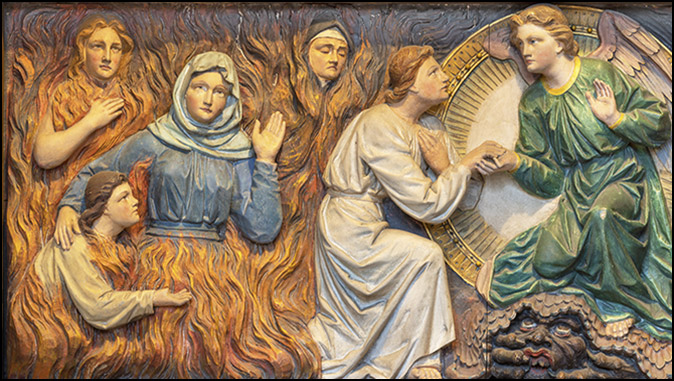 A Blasphemous Triad of Betrayal
By Mike Gendron

Blasphemy often occurs when people fail to honor the Lord Jesus Christ with reverence and thanksgiving for all He has done. False teachings and false depictions of the Lord Jesus can also be blasphemous when they deny His finished, all-sufficient work of redemption. Such a blasphemous betrayal of the person and work of Christ keeps people trusting in what they must DO to be saved, instead of what Christ has DONE.

The Demonic Doctrine of Venial Sin

Most people are unaware that Catholicism perpetuates the first lie of Satan with its doctrine of venial sin. In the Garden of Eden, the devil promised Eve she would not die if she disobeyed God. “The serpent said to the woman, ‘You surely will not die!’ (Gen. 3:4). In the same way, the Catholic clergy deceives its people with the lie that “venial sins” do not cause death, only temporal punishment. Catholics are instructed to accept the temporal punishment of sin as a grace.

Tragically, they are easily deceived because they do not test the uninspired words of men with the inspired Word of God. God’s Word declares: “Whoever keeps the whole law and yet stumbles in one point, he has become guilty of all” (James 2:10). Since all sins are committed against an infinitely holy God, His justice demands eternal death (Ezekiel 18:4; Rom. 6:23). The one sin of Adam brought death and condemnation to all men (Rom. 5:12, 18). Consequently, everyone who dies with unforgiven sin will be punished in the eternal fires of hell (Rev. 20:14-15).

The Ungodly Dogma of Purgatory

The satanic doctrine of “venial sins” leads to another cunning lie of the devil called Purgatory where temporal punishment is said to be carried out. Catholics are taught that venial sins must be purified either here on earth, or after death in Purgatory. Those who die imperfectly purified undergo a purification after death, so as to achieve the holiness necessary to enter the joy of God. The Catholic religion refuses to say how long Catholics must suffer in purgatory for their “venial sins.” However, they can be removed more expeditiously when Catholic priests offer Eucharistic sacrifices on behalf of the dead. This deception makes Catholics utterly dependent upon their priest while they are living and even after death.

This profane dogma denies the sufficiency of Christ as the one and only Savior who died once, for all sin, for all time (Heb. 10:10, 12, 18). He forgives all transgressions and cancels the sin debt for all believers (Col. 2:13). The purifying fire of purgatory is a diabolical lie that robs Christ of His glory because His precious blood purifies all sin (1 John 1:7). “When He had made purification of sins, He sat down at the right hand of the Majesty on high” (Heb. 1:3). Our great God and Savior Jesus Christ gave Himself as the perfect sacrifice to purify for Himself a people for His own possession (Titus 2:13-14).

The Money Grabbing Lie of Indulgences

The Catholic religion offers a way to expedite removal from Purgatory through indulgences. This represents the third demonic doctrine of this triad of betrayal. The selling of God’s forgiveness through indulgences was one of the sparks that ignited the Reformation 505 years ago when this fraudulent lie was exposed. Martin Luther first protested the sale of indulgences in 1517. Yet, the offering of indulgences continues today. In fact, the apostate church condemns with anathema those who maintain the uselessness of indulgences or deny the power of the Church to grant them. The Council of Constance, Canon 28, states: “the pope can grant indulgences for the remission of sins to all Christians who are truly contrite and have confessed, especially to those who make pilgrimages to the holy places and to those contributing to them.” The selling of these indulgences, promoted by lies from priests and popes about their efficacy, was a major source of revenue for the building of St. Peter’s Basilica.

The Blasphemous Hoax of the Treasury of Merit

Indulgences are obtained from a treasury of merit which include the merits of Mary and the prayers and good works of the saints, co-mingled with the merits of Christ. In this way, Catholics can attain their own salvation and cooperate in saving their brothers. This devilish fabrication states that there is a link “between those who are expiating their sins in purgatory and those who are still pilgrims on earth. Between them there is an abundant exchange of all good things (indulgences).” Catholicism teaches “Through indulgences the faithful can obtain the remission of temporal punishment resulting from sin for themselves and also for the souls in Purgatory.” Catholics will never know they are deceived until they are confronted with the truth. God’s Word declares: “No man can by any means redeem his brother or give to God a ransom for him. For the redemption of his soul is costly, and he should cease trying forever” (Psalm 49:7-8). Man can never DO what Christ has DONE.

The Need to Repent and Believe the Gospel

Let us love Catholics enough to show them they have betrayed the Lord Jesus by embracing this triad of deceptive heresy. Let us expose and destroy their safety net of purgatory, indulgences and “venial sins” with the Sword of the Spirit, which is the Word of God (Eph. 6:17). Let us call Catholics everywhere to repent of these lies and believe the glorious Gospel of grace (Mark 1:15). Let us do it all for the glory and honor of our Great God and Savior Jesus Christ!