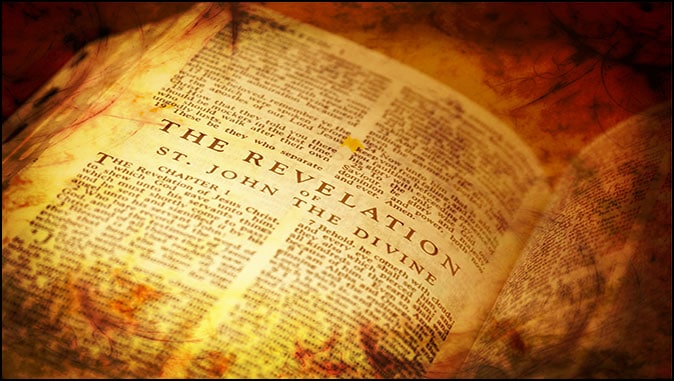 Where Can the Church Be Found in the Book of Revelation?
By Tim Moore

That’s a very good question because it relates to our expectation of the imminent Rapture of the Church — meaning all who are saved and collectively called the Bride of Christ. I offer three clues regarding the absence of the Church during the Tribulation.

First, the book opens stating that it is the “Revelation of Jesus Christ which God gave Him to show to His bond-servants” (1:1). In verse 4 John addresses seven churches in Asia, and of course chapters 2 and 3 consist of Jesus’ dictated letters.

Jesus’ messages to those individual churches echo down the centuries to us today. The churches themselves are representative of different types of churches and offer a prophetic overview of the Church age as it has progressed over the past 2000 years.

Then, at the beginning of chapter 4, the scene shifts. John, who was on the island of Patmos, heard a voice that called (or raptured) him up to heaven. He was “immediately” transported in the Spirit to the throne room of God. The next 14 chapters describe the Tribulation period in great detail, but there is no mention of the Church — by name or by description.

Some have mischaracterized the 21 judgments unleashed by God on the earth during the Tribulation as the wrath of Satan, but this is not biblical. Paul revealed that “the wrath of God will fall upon the sons of disobedience” — meaning those who have rejected Jesus Christ (Colossians 3:6). Our beloved Bridegroom has no intention of beating up His Bride just before gathering her to His father’s house. Instead, “having now been justified by His blood, we shall be saved from the wrath of God through Him” (Romans 5:9).

A second clue pointing to the absence of the Church during the Tribulation is found in the wording of the messages to the seven churches. To every one Jesus says, “He who has an ear to hear, let him hear what the Spirit says to the churches.” Later, when John is describing the dragon on the earth (False Prophet) and the beast from the sea (Antichrist), he merely says, “If anyone has an ear, let him hear” (13:9). That warning is not offered to the Church because it will not be present.

Revelation clearly communicates that God’s wrath will be poured out on a rebellious and unrepentant world. Those who have rejected Christ will recognize that fact, for John records that they will say to the mountains, “Fall on us and hide us from the presence of Him who sits on the throne, and from the wrath of the Lamb” (6:15-16).

The third clue is the reappearance of the Church in Revelation 19 — when John records the marriage of the Lamb and His Bride. Following the marriage supper of the Lamb, the Bride of Christ will then follow Jesus as He returns — this time in glory — to defeat Satan and reign upon the earth.

The bottom line is that the Church — including all of us who are collectively called the Bride of Christ — does not need to fear God’s wrath. Soon and very soon, the Heavenly Father will tell our Bridegroom, “Go, and get your Bride!”

Behold The Black Horse By Jack Kelley Note: While Jack wrote this article many years…

Comparing The Beasts Of Rev. 13 And 17 By Jack Kelley The Beast Of Rev.…

The Book of Revelation

The Book of Revelation By Chuck Missler A Unique Promise: Revelation 1:3 "Blessed is he…