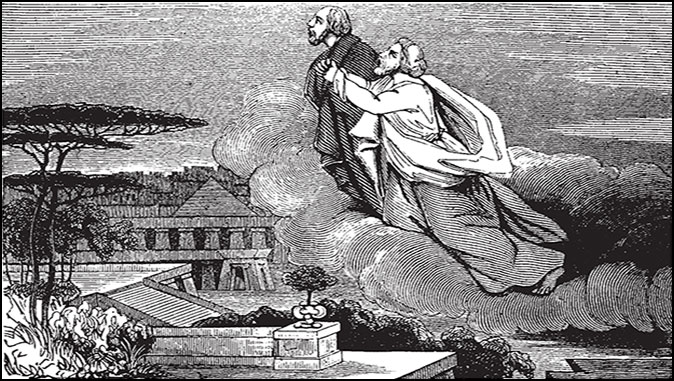 The Two Witnesses of Revelation
A Bible Study by Jack Kelley

And I will give power to my two witnesses and they will prophesy for 1260 days clothed in sack cloth. These are the two olive trees and the two lamp stands that stand before the Lord of the earth. If anyone tries to harm them fire comes from their mouths and devours their enemies. This is how anyone who wants to harm them must die. These men have power to shut up the sky so that it will not rain during the time they are prophesying and they have the power to turn the waters into blood and to strike the earth with every kind of plague as often as they want. (Rev 11:3-6).

What Was Your Name Again?

Several Old and New Testament figures have been suggested as the identities of these two, including Moses, Elijah, Enoch, John and Nathaniel. But if the two witnesses are Biblical figures from the past, the most logical candidates are Moses and Elijah, and here’s why. The supernatural signs used to authenticate the ministry of the two witnesses are the same ones that Moses (plagues, and water into blood) and Elijah (drought and fire) used to authenticate theirs and are decidedly Old Testament in their nature. Moses is known in Judaism as the giver of the Law, while Elijah is considered the greatest of Israel’s Prophets. In fact the Old Testament is often called “the Law and the Prophets”, hinting at the contributions of these two great leaders from Israel’s history. Who better to represent God on Earth during the time when He brings events foretold in “the Law and the Prophets” to their ultimate climax?

Moses and Elijah were both with the Lord on the Mount of Transfiguration where the discussion involved His departure and 2nd coming (Luke 9:28-31 & 2 Peter 1:16-18). By the way that event was rich in symbolism. First of all it took place out of time, Jesus appearing as He later would at His 2nd coming joined by the Voice of the Father, and the Cloud or Shekinah Glory, a manifestation of the Holy Spirit. Then you have Moses and Elijah representing Old Testament and Israel, and finally Peter, James and John, representing the New Testament and the Church. Peter’s suggestion that he build booths for Moses and Elijah refers to a fulfillment of the Feast of Tabernacles, recalling the time when God dwelt with man and looking forward to the Millennium when God will again dwell among us. Also first century church tradition holds that Moses and Elijah were the two men in white who appeared to the disciples on the Mt. of Olives at the Lord’s ascension and promised His return (Acts 1:10-11).

The Age Of Man

As the age of man draws to a close we come full circle with God when, following the removal of the Church, He turns again to Israel as the focus of His attention and reverts to an Old Testament approach to mankind in general. In the Old Testament people believed in God because of the dramatic supernatural signs He gave to demonstrate His existence. It has been described as a time of belief by evidence. In the Upper room as Thomas saw the evidence Jesus presented him and believed, Jesus said, “Because you have seen Me you have believed. Blessed are those who have not seen and yet have believed” (John 20:29). This was the Lord’s last beatitude and looked forward to the coming Church.

The Church Age is a time of belief by faith, and that faith has brought great blessing, just as the Lord promised. When those who have believed by faith are gone, God will once again demonstrate His existence with dramatic supernatural signs, and many will believe because of this evidence. It’s going to be pretty tough to look up into the sky and see an army on white horses descending and say, “No I don’t believe that.”

The Book of Revelation documents this return to a time of belief by evidence, and will make things even more obvious because mankind will now have a script with which to follow the action. Of Revelation’s 404 verses 278 are direct quotes from the Old Testament. Remember, God’s primary objectives during the Great Tribulation are two fold; to completely destroy all the nations among which the Jews were scattered, and to discipline and purify Israel (Jere. 30:4-11) in preparation for the Kingdom Age.

The Great Tribulation is so Old Testament in its nature and so obviously directed at Israel, it’s only logical to see the two witnesses as a return of two of Israel’s greatest leaders.

Are They Dead Yet?

From Scripture we know that Elijah was taken alive into Heaven (2 Kings 2:11) and that Moses died on Mt. Nebo in Moab (Jordan) and was buried by God Himself in a place unknown to man (Deut. 34:1-6). Hebrews 9:27 states that man is destined to die once and after that to face judgement. It’s an obvious denial of the concept of reincarnation, but it also gives some scholars trouble with the idea of Moses coming back as one of the two witnesses. They’re OK with Elijah coming back: he never died (or did he? See Matt. 17:11-13). But what about Moses?

Then there’s a curious reference in Jude 9 hinting at a dispute between the Arkangel Michael and Satan over the body of Moses. Michael is one of the few angels named for us, and usually appears as a commander in God’s army fighting battles in defense of Israel (Daniel 12:1). Why did God need Moses’ body? Was Moses to be resurrected for some later mission to Israel? The reference in Jude assumes his readers knew or could figure out the answer.

All things considered I believe the weight of evidence favors Moses and Elijah as the two witnesses of Revelation 11. One of the great blessings of living in our time is that we won’t have long to wait until we find out for sure. You can almost hear the footsteps of the Messiah.