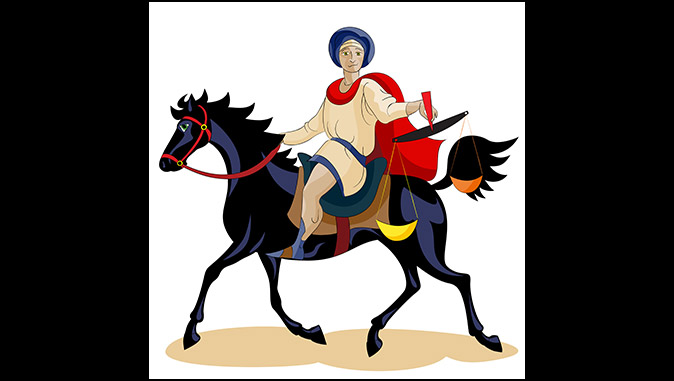 Note: While Jack wrote this article many years ago and with the current situation with high inflation caused by Joe Biden’s policies, it seems timely to read what the Bible says about inflation in the end times.

When the Lamb opened the third seal, I heard the third living creature say, “Come!” I looked, and there before me was a black horse! Its rider was holding a pair of scales in his hand. Then I heard what sounded like a voice among the four living creatures, saying, “Two pounds of wheat for a day’s wages, and six pounds of barley for a day’s wages, and do not damage the oil and the wine!” (Rev. 6:5-6)

In answer to a recent question, I made the comment that early signs of the coming Seal Judgments are beginning to appear. This does not mean I believe we’re in the beginning of Daniel’s 70th week. It means I can see signs that it’s not far off, which means the rapture of the Church is even closer.

Although I believe the Seal judgments will be sequential, I don’t think the signs of their coming will necessarily be in order. Some have different run-up periods than others. For example, we know the first seal says that a man will suddenly appear on the world scene. He’ll seem to be a peace maker but his real agenda will be to conquer the world. He’s the rider on the white horse. After him a rider on a red horse will appear, and war will soon follow as the true intent of the man on the white horse is revealed. These two judgments indicate that a man appears and quickly leads the world from a perception of peace to the reality of war. His rise to power has certainly been underway for some time even though no one knows who he is yet. But once his time comes, he’ll have the whole world behind him in no time. The point is, for the most part the run up to the first two seals is invisible.

The third seal judgment, also known as the Black Horse, is different in that the run-up is visible and can be tracked. The rider on the black horse holds a pair of scales with which to measure the comparative value of money and food. Changes in the relationship between the two can be tracked, allowing us to make as good guess as to how close we’re getting. This relationship is the topic of our study today.

Recently financial experts have warned about the likelihood of runaway inflation as a result of the of the US government’s increasing debt. This will make the dollar worth less and less which means the things people buy will cost more and more by comparison. The most noticeable early signs are in commodities such as food, partly because the effects of inflation have been compounded by shortages.

The World Bank says, “World food price volatility remains significant and in some countries, the volatility is adding to already higher local food prices.” As examples, world wheat and corn prices have risen 57%, rice 45% and sugar 55% over the last six months and soybeans are at their highest price for 16 months. Some experts are saying we’re only one crop failure away from having out of control shortages in many parts of the world. The World Bank concluded it’s report by saying the world should expect this kind of volatility in food prices for the next 5 years.

The National Inflation Association, or NIA, (www.inflation.us) tracks real world changes in inflation. They say the government’s Consumer Price Index (CPI) figures would have you believe that food inflation is at the slowest pace on record. But every food shopper knows this is not true. The NIA claims that when calculating food inflation, the government uses something called geometric weighting, which gives a lower weighting to goods that are rising in price and a higher weighting to goods that are falling in price. If the price of steak is rising while the price of hamburgers is falling, the CPI will give a lower weighting to steak and a higher weighting to hamburgers. The government justifies this by saying that rising steak prices mean Americans are more likely to eat hamburgers. As a result of this weighting, the CPI no longer measures what it would cost to maintain the same standard of living as in the past. It’s now based on the realization that America’s standard of living has been in decline and the expectation that it will continue to decline in the future.

The NIA also says there’s a misconception in America that wages have risen at the same rate as price inflation, when this is simply not the case. The median household income in the U.S. was $11,800 in 1975 and today is $49,777. If you go by the government’s CPI, $11,800 in 1975 dollars equals $47,208 in today’s dollars. That would seem to indicate that Americans are earning slightly higher real incomes today than 35 years ago. However, the truth is, once you discount the effects of geometric weighting, the median household income in 1975 of $11,800 actually equals $154,000 in today’s dollars. This explains how in 1975, a father was able to support a family on just one income and college students were able to afford their own tuition with just a summer job. Today, in many cases both parents need to work to support their family, and students need to go deeply into debt to fund their education.

As for the elderly, NIA calculates that because of the way the CPI has understated the real rate of price inflation, Americans on Social Security should be receiving payments that are more than double what they receive today. Unfortunately, the government just announced last month that Americans on Social Security will receive no payment increase in 2011, despite the fact that food inflation will likely become the biggest crisis of the year, much larger than the mortgage crisis we have today.

On a related note, analysts have said it’s no longer a question of if but when and how much money the Fed will pump into the system in an effort to stabilize the economy. Some say as much as $2 trillion will eventually be needed. There are no assets backing this money. It will come straight out of thin air. As you read this, the Fed has begun an initial purchase of government debt totaling $600 billion. We’ll be able to track the effects on the value of the dollar by measuring rising prices.

Back in the fall of 2008, I posted a summary of comments by Gerald Celente, CEO of Trends Research Institute. He’s renowned the world over for his accuracy in predicting future world and economic events. He accurately predicted the 1987 stock market crash, the fall of the Soviet Union, the 1997 Asian currency collapse, the sub-prime mortgage crisis, and one year before the fact predicted what he said would become known as the Panic of 2008, saying that giants would tumble to their deaths, which is what we’ve just seen in the fall of several of our oldest and biggest financial firms, and with the big three auto makers teetering on the brink.

At that time Celente was forecasting food riots and tax rebellions in America – all within four years, cautioning that putting food on the table will be a more pressing concern than buying Christmas gifts by 2012.

“We’re going to see the end of the retail Christmas. We’re going to see a fundamental shift take place. Putting food on the table is going to be more important that putting gifts under the Christmas tree,” said Celente, adding that the situation would be “worse than the great depression”.

“America’s going to go through a transition the likes of which no one is prepared for,” he said at the time, noting that people’s refusal to acknowledge that America was even in a recession in 2008 highlighted how big a problem denial is in being ready for the true scale of the crisis.

While they were pretty astonishing at the time, two years later it seems much more likely that they’ll turn out to be true.

I’m not saying that Celente is a prophet, or even that his predictions confirm what the Bible says. But current conditions point to continuing increases in food prices and because of our government’s economic strategy some experts say the possibility of run away inflation can not be ignored.

The conditions described in Rev. 6:5-6 are infinitely worse than anything we’ve ever seen, and even worse than Celente’s predictions. It will take all of an average worker’s pay for one day’s work to buy enough food just for the day. Conditions are no where near that bad now. But unless some drastic changes take place, that’s where we’re heading and getting there by 2012 is well within the realm of possibility.

My purpose in offering this commentary is not to provide a comprehensive treatment of Rev. 6:1-8, also known as the Four Horsemen of the Apocalypse, but to use current money and food conditions to demonstrate how the Black Horse judgment will materialize.

And remember, the Black Horse is the third in the series and follows the outbreak of war over 25% of the world (Rev. 6:8). War is known to disrupt food supplies in affected regions. Add this disruption to world wide food supplies that are already strained and a monetary system that’s been robbed of its value and you can see how it would take everything a person earns just to feed himself.

The fact that this judgment follows the rapture does not mean we can relax and pretend nothing’s wrong. Even if this new congress follows through on its promises, it will take several years just to stabilize America’s debt problem and in the mean time the government will need to borrow even more just to meet the commitments it has already made. This is bad news for the whole world, and it’s not at all certain that the problem can ever be solved. America may already have done to itself what no outside enemy could accomplish and brought about its own defeat.

I believe the rapture of the Church is very near and could literally happen any day. But each day the Lord tarries will be a day of increasing uncertainty, especially for the unemployed and under employed. This is not a time for hoarding or investing in the future. We who have excess should be more diligent than ever in seeking out and helping those who are unable to help themselves.

And above all, we must have hope, for the Lord has promised to come for us. It was He who said, “Nation will rise against nation, and kingdom against kingdom. There will be great earthquakes, famines and pestilences in various places, and fearful events and great signs from heaven. When these things begin to take place, stand up and lift up your heads, because your redemption is drawing near” (Luke 21:10-11, 28). You can almost hear the footsteps of the Messiah.

Comparing The Beasts Of Rev. 13 And 17 By Jack Kelley The Beast Of Rev.…

The Book of Revelation

The Book of Revelation By Chuck Missler A Unique Promise: Revelation 1:3 "Blessed is he…

Restoring Planet Earth By Jack Kelley Jesus said to them, “I tell you the truth,…