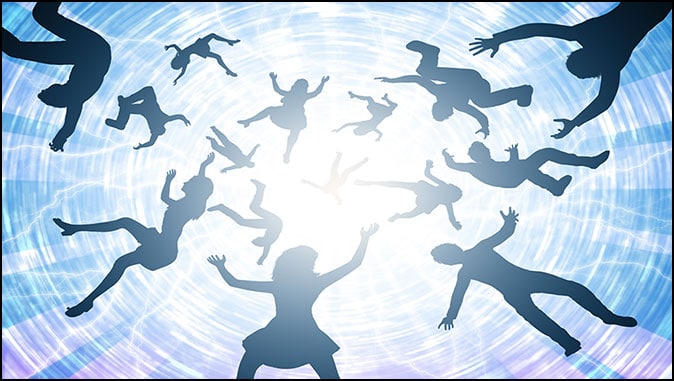 In the book of Revelation, the New Jerusalem is mentioned as being twelve thousand furlongs in length, height, and width. Since this translates to 1500 miles square, it would seem difficult to move around in such a large edifice. In addition, the building is rather tall for an elevator. Besides, I cannot imagine being able to withstand such a plummeting ride with infinite g forces even with our new bodies (Philippians 3:21). Therefore, perhaps God’s answer could be by people being transported.

This is a spiritual gift that involves a change in distance. The best way to understand the gift of being transported is one second you are here and the next second you are there. Scripture mentions numerous examples of instantaneous travel. Furthermore, the travel is either one way or round trip. The initial indication was the heavenly journey of Enoch (Genesis5:24) and Elijah. I believe the Good Thief in the New Testament died before his journey as Jesus said, “This day you will with me in paradise” implying being transported later in the day after his demise (Luke 23:43).

The temptation of Jesus involved numerous transports. After Jesus was baptized and filled with the Spirit, the scripture relates that He was led by the Spirit to the desert (Matthew 4:1). Under Satan’s power Jesus was lead twice including his journey to the Holy City (Matthew 4:4). After the temptations ended, scripture states Jesus returned to Galilee by the power of the Spirit (Luke 4:14). Continuing the examples, John was brought to heaven where he was shown the End Times which he revealed in the book of Revelation. Paul was also gifted with a heavenly trip returning after being taught by Jesus. There is another example in scripture concerning the baptism of the Eunuch with Phillip being transported afterward to the city of Acutus (Acts 8:39-40).

There are also listings of Jesus suddenly appearing after His Resurrection which may have been occasioned by being transported. These incidents were reported in the gospels. Some of these appearances revealed another gift, namely the ability to pass through solid material when the disciples were behind locked doors, but Jesus suddenly stood before them (John20:19).

Will we experience some of these biblical gifts+? I have to say , “Probably, yes.” “The Spirit himself bears witness with our spirit that we are children of God. But, if we are children, we are then heirs of God, and joint heirs with Christ.” (Romans 8:17). Furthermore, “whoever confesses that Jesus is the Son of God, God abides in him, and he in God (1 John 4:15).”

Of course, the ultimate transport is the Rapture of His church. Scripture says we will meet Jesus in the clouds after receiving our new body and then be transported to heaven. There are some folks who dismiss the Rapture or openly condemn it as mythical or not in the bible. The reality is that the Rapture of the church was in the divine plans from the beginning. I believe there is a small hint in Isiah 26, but just as the Messiah was not revealed until the proper time, the Rapture was not either. I find it difficult to reject the Rapture when Jesus Himself taught Paul at his heavenly visit. Furthermore, upon his return from heaven, Paul revealed the forthcoming heavenly flight in his letters to the Thessalonian’s and the Corinthians.

Someone once told me that they do not believe we will travel to the clouds where Jesus awaits us. I commented , “How can you not believe as this is revealed in the bible, the Word of God. Their comment was, “I’ll wave at you as you fly by!”

Who Goes in the Rapture?

Who Goes in the Rapture? By Terry James Listening to a man who was obviously…