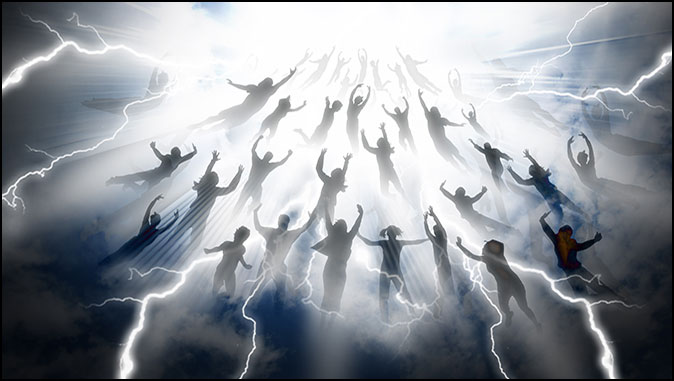 The Rapture Is a Biblical Event
By Jonathan C. Brentner

Early in the twentieth century, belief in the Rapture became a mainstay at Bible-believing churches in America and throughout the free world. Pastors boldly encouraged their flocks with the hope of Jesus’ imminent appearing.

Unfortunately, much has changed during the past twenty-five years. The word “Rapture” has become taboo in most churches, even in many that claim to believe in the inspiration and inerrancy of Scripture.

Last year, I listened to a former pastor of mine preach on 1 Thessalonians 4:13-18. He avoided all references to Jesus’ return for His church and said nothing whatsoever about verse 17. He changed our biblical hope in Jesus’ imminent appearing to a far distant resurrection that does little, if anything, to encourage the saints during these perilous times

I often ask myself this question, “Who are these scoffers who exert so much influence over what is taught regarding the Rapture?”

For those who desire to present the truths of our “blessed hope” in a convincing way, I am offering a guide, beginning with this post. You will not convince the mockers of our hope, but I believe you will help others understand the firm scriptural basis for what you believe about the Rapture.

The first step is to describe the Rapture is a biblical event, which it surely is.

Scripture clearly outlines a series of events that we call the “Rapture.” Consider the following quote from Dr. Ed Hindson:

The best place to begin talking about the Rapture is how it’s presented on the pages of the Bible, as an actual future event.

We can establish the Rapture as scripturally sound event irrespective of its relationship to the Tribulation period. As Dr. Hindson alludes to in the above quote, there must be a time when the actions that Paul describes in 1 Thessalonians 4:15-17 happen or God’s Word is not true:

“For this we declare to you by a word from the Lord, that we who are alive, who are left until the coming of the Lord, will not precede those who have fallen asleep. For the Lord himself will descend from heaven with a cry of command, with the voice of an archangel, and with the sound of the trumpet of God. And the dead in Christ will rise first. Then we who are alive, who are left, will be caught up together with them in the clouds to meet the Lord in the air, and so we will always be with the Lord.”

This is the same event that the apostle wrote about in Corinthians 15:50-53:

“I tell you this, brothers: flesh and blood cannot inherit the kingdom of God, nor does the perishable inherit the imperishable. Behold! I tell you a mystery. We shall not all sleep, but we shall all be changed, in a moment, in the twinkling of an eye, at the last trumpet. For the trumpet will sound, and the dead will be raised imperishable, and we shall be changed. For this perishable body must put on the imperishable, and this mortal body must put on immortality.”

Our biblical hope as New Testament saints consists of the following sequence of events all of which will happen very quickly, almost simultaneously:

– Jesus raises the dead in Christ and joins them the souls that He brings with Him at His appearing (1 Thessalonians 4:14-16; 1 Corinthians 15:52).

There’s no greater comfort than this hope, as outlined above, as we journey through these perilous times. Paul told the Thessalonian saints to encourage each other with these things (1 Thessalonians 4:18, 5:11). Is this not something we should be doing as the days grow darker in the shadow of the Tribulation?

The New Testament Repeatedly Connects the Rapture with the Gospel

In 1 Thessalonians 1:9-10, we learn that Paul’s initial proclamation of the Gospel in Thessalonica included the fact of Jesus’ appearing to take believers away from a future time of wrath upon the earth (aka the Rapture):

“For they themselves report concerning us the kind of reception we had among you, and how you turned to God from idols to serve the living and true God, and to wait for his Son from heaven, whom he raised from the dead, Jesus who delivers us from the wrath to come.”

Their conversation story consisted not only of turning away from idols, but included that of waiting for Jesus’ appearing (as described in the previous section).

“And not only the creation, but we ourselves, who have the firstfruits of the Spirit, groan inwardly as we wait eagerly for adoption as sons, the redemption of our bodies. For in this hope we were saved. Now hope that is seen is not hope. For who hopes for what he sees? But if we hope for what we do not see, we wait for it with patience.”

The event Paul alludes to is the Rapture; this is the time when we receive our immortal bodies (“the redemption of our bodies”), and the Lord completes our adoption into God’s forever family. Notice what the apostle says about our anticipation of this event, “For in this hope we were saved.” The Rapture is an essential aspect our hope, the future tense of the Gospel.

For New Testament saints, the Rapture marks the time when we fully experience the eternal life that we inherited at the moment we first believed. Paul’s descriptions of Jesus’ appearing simply adds details to Jesus’ promise of eternal life for all those who would believe in Him.

The event we call the “Rapture” is the essence of our eternal hope; it’s the Gospel future. It was never an afterthought in the New Testament church as it has become today.

Jesus Referred to the Rapture, Too

In John 14:1-3, as Jesus sought to comfort His disciples after telling them He was about the leave them, He referred to the event we know as the Rapture.

Consider the words of Colossians 3:4, “When Christ who is your life appears, then you also will appear with Him in glory.”

When Jesus appears (aka the Rapture), we appear “in glory” with Him. We do not remain on the earth, but the Lord will catch us up just He promises us in 1 Thessalonians 4:17 and take us to glory as He says He will do in John 14:2-3 and Colossians 3:4.

Pastors, some will take issue with you and possibly leave your church at your mention of the Rapture. These scoffers, however, are those who do not accept something that’s plainly taught in God’s Word. Please understand that it’s such people that cause division in your congregation (see Jude17-20), not you.

People have called me a heretic and false teacher more times that I can remember. But remaining true to God’s word is what matters, not the opinion of others.

The first step is to discuss the Rapture as a biblical event that’s either described or referred to throughout the New Testament.

Next, I will demonstrate why we can assert that the Rapture is different from the Second Coming of Jesus. They absolutely cannot be the same event.