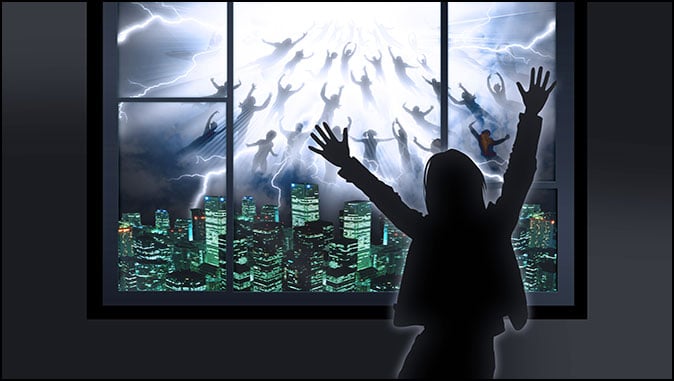 Blessed Hope or Bunch of Dopes?
By Terry James

Usually, when coming against the pre-Trib view of Rapture, detractors say something like: “The word ‘rapture’ isn’t mentioned anywhere in the Bible.”

We usually retort with something like: “Neither are words such as ‘trinity’ or even ‘Bible.’ But they are clearly there when considering contexts and study of the body of scriptural evidence.”

“Besides,” we say, “the Greek word harpazo is found as the word rapturo in the Latin Vulgate.”

Anyone paying much attention to prophetic trends concerning eschatological viewpoints (whether premillennial, postmillennial, amillennial, or whatever) will have noticed by now a turning away from the pre-Trib position.

Even more strongly stated, we see an adamant, even scathingly antagonistic, movement away from this view.

My own thinking about the reason for this is that it is short-sightedness and experiential paralysis. Those who have abdicated – call it “defected from — the pre-Trib Rapture position can’t conflate an imminent Rapture with the prophetic stage-setting we’re experiencing.

Our headlines create in the minds of these defectors an inability to any longer believe that Titus 2:13 really means what it says.

“Looking for that blessed hope, and the glorious appearing of the great God and our Saviour Jesus Christ” – (Titus 2: 13).

These defectors and/or detractors are experiencing the crush of the stage being set for the Tribulation (Daniel 9 and the book of Revelation) every hour of every day. Those who have always come against any idea of a pre-Trib Rapture are appearing to be increasingly validated through the things taking place in America and across the world.

They see the ethnic upheavals prophesied by Jesus (Luke 21 and Mark 13). They see the principalities and powers of wickedness in high places literally taking over this nation and the world. They see apostasy abounding everywhere they look — with the Roman Catholic pope leading the way in championing the murders of millions upon millions of babies in their mothers’ wombs, all the while denying that Jesus Christ is the only Way to reconciliation with God the Father and salvation.

Those angry against the view of the pre-Trib Rapture give Paul the apostle, who was given the mystery of that great Rapture event by the Lord Himself, little to no credence. Yet, they point to how the “perilous times” (2 Timothy 3) prove their point that the Tribulation might already be in its beginning stage of fulfillment. “We are,” I heard one of these Rapture detractors say, “right in the middle of perilous times, and this proves there will be no Rapture before the Tribulation era becomes full-blown.”

I listened to one pastor, who was said to have dropped out of the “Church of God,” say that he used to be a believer in the pre-Trib view, but he now sees it as a false and dangerous teaching. He, in effect, went on to lay out his case that all who believe in a pre-Trib Rapture, seeing all the things unfolding in the world today, are dopes. We are fools for such foolishness after living through such, at the very least, a time of just entering the Tribulation.

The pastor went on to say that no place in the Bible states there will be a seven-year Tribulation period. He said it only speaks of the “Great Tribulation” mentioned by Jesus in the Olivet Discourse and that what Jesus said proves that era will be only three and a half years.

Again, he and his anti-PreTrib Rapture sort point to the lack of a single verse in order to prove the pre-Trib view is false. (Our view — which is the Bible’s presentation — holds to a seven-year Tribulation). They can’t, or won’t, see that the wide body of text, in context, proves that the horrendous time leading up to the Second Advent of the Lord Jesus encompasses seven years. All we have to do is to look at Daniel’s prophecy of seven weeks of years (Daniel chapter 9) to understand the time span that will wrap up God’s plan that leads to the millennial reign of Christ.

The pastor then said we who are of the pre-Trib belief refuse to debate him and others on the matter. He is right about that. I and others have long ago refused to debate whether there is a pre-Trib Rapture. It serves no purpose, as all the issues have been long-ago debated and with only harsh rhetoric emerging when the final analyses concluded.

We point people who want truth to the “mystery” given Paul as he expounded upon in 1 Corinthians 4:51–55 and 2 Thessalonians 4:13–18. No need to debate the pre-Trib Rapture. It is there for anyone to clearly understand with the Holy Spirit’s guidance.

I’m convinced that anyone and everyone who genuinely seeks truth by studying these Scriptures will find that the pre-Trib view and the “blessed hope” of Titus 2:13 isn’t held by a bunch of “dopes,” as charged by the detractors/defectors.

Revelations of Paul, & the Mystery of the Rapture – Part 2

Revelations of Paul, & the Mystery of the Rapture – Part 2 By Randy Nettles…

Revelations of Paul, & the Mystery of the Rapture – Part 3

Revelations of Paul, & the Mystery of the Rapture – Part 3 By Randy Nettles…

I Still Believe in Jesus’ Imminent Appearing By Jonathan C. Brentner I feel like I…