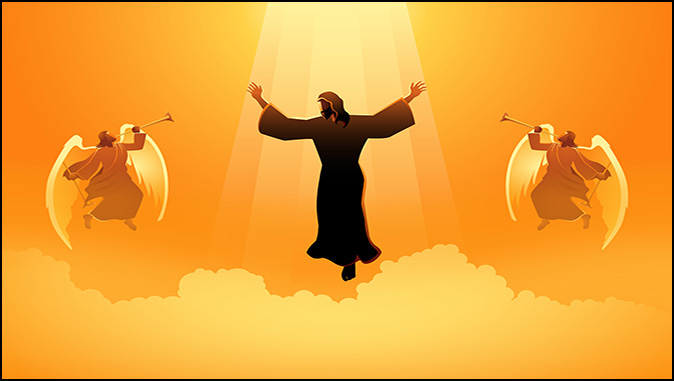 At Any Moment
By Jonathan C. Brentner

In my book, The Triumph of the Redeemed, I used the following story to introduce the New Testament expectancy of Jesus’ imminent appearing:

A GEICO commercial from a few years ago portrays a spy on a large, flat roof fleeing from armed men as a black helicopter approaches from the air, presumably to join the chase. The man’s phone rings as his adversaries appear ready to capture him and perhaps kill him. Thinking the call is from those coming to rescue him, he answers the phone, shouting, “Where are you?”

We then see his mom relaxing by a swimming pool as she calmly talks to him about his dad’s battle with squirrels in the attic as we see the furry animals flee the house and run around the water. As she continues talking to her exasperated son, the narrator interjects, “If you’re a mom, you call at the worst time. It’s what you do.”

Reflecting on New Testament teaching regarding Jesus’ imminent appearing, we might change this to: “Once we receive the Lord’s gift of eternal life, we live in expectancy of Jesus’ imminent return. It’s what we do.”

New Testament saints regarded the biblical event that we call the Rapture as something that could happen at any moment. It’s what they did. It’s something we should do as well.

So far in this series designed to help believers defend their hope as well as enable pastors to boldly proclaim the biblical truth of the Rapture, we have established it as a biblical event and something that cannot happen at the same time as the Second Coming.

We also reviewed evidence demonstrating that people in the early centuries of the church believed the Lord would come for them before a period of God’s wrath upon the earth. Modern day scoffers attack biblical truths related to the Rapture on the basis of church history, but they err greatly, deceive many people, and cause much division among believers.

The Scripture passages that I referenced in my second post reveal that a significant amount of time must transpire between the Rapture and Jesus’ Second Coming. However, it’s the eager expectancy for which New Testament saints watched for Jesus’ appearing that places the Rapture before the start of the seven-year Tribulation.

“But our citizenship is in heaven, and from it we await a Savior, the Lord Jesus Christ, who will transform our lowly body to be like his glorious body, by the power that enables him to subject all things to himself.”

The Greek word for “await” in verse 20 denotes to an “intense anticipation” or an “excited expectation” of a future event. In this text, Paul portrays believers as eagerly longing for Jesus’ appearing with great anticipation; they expected it could happen at any moment.

Luke used the same Greek word for “await” in Acts 17:16 to describe Paul’s restless “waiting” in Athens for Silas and Timothy to rejoin him. After the apostle’s distressing experiences in Philippi, Thessalonica, and Berea, we know he intently watched and longed for a reunion with his fellow laborers. This is the same passionate yearning of the soul with which the apostle characterizes the waiting of New Testament saints for the Lord’s appearing.

Paul’s depiction of believers excitedly watching for the Rapture only makes sense if it could occur at any moment. If they believed that a part of the Tribulation would happen before the Rapture, they wouldn’t have had the same attitude since much suffering and death would, of necessity, precede it. They would have faced intense and deadly persecution rather than the joy of Jesus catching them up in the air to take them home to heaven.

In 1 Corinthians 1:7, Paul used the same Greek word for “wait” as he did in Philippians 3:20 to indicate his readers’ heartfelt longing for Jesus’ appearing, “so that you are not lacking in any spiritual gift, as you wait for the revealing of our Lord Jesus Christ.” Despite the immaturity of the saints in Corinth, they excitedly watched for Jesus’ appearing.

This heightened expectation of the early followers of Jesus tells us they regarded the Rapture as imminent. No other explanation fits with their anticipation of it possibly occurring in the immediate future.

We see a similar expression of such watchfulness in Titus 2:11–13:

“For the grace of God has appeared, bringing salvation for all people, training us to renounce ungodliness and worldly passions, and to live self-controlled, upright, and godly lives in the present age, waiting for our blessed hope, the appearing of the glory of our great God and Savior Jesus Christ.”

Upon turning to Jesus, New Testament saints immediately began waiting for their “blessed hope,” the Lord’s return for them, as though it might occur at any time. It’s what they did.

Paul and the other apostles did not divorce the Rapture from their preaching; they proclaimed it along the other essentials of our faith such as Jesus’ death on the cross on our behalf, His burial, and His resurrection.

In 1 Corinthians 16:22, Paul prayed, “Our Lord, come.” The word for this phrase in the original text is the Aramaic maranatha. This word signifies “a petition to Christ that He should return now — at any moment. Paul used it in this letter to Greek-speaking (mostly Gentile) Christians in Corinth because it expressed an idea that had become universal in the early church. Christ could come at any moment, and Christians called upon him to do so.”

Jesus’ return for His church was not only something these early saints believed might happen at any instant; they prayed for it to happen soon. The word maranatha expressed their heartfelt desire for Christ to appear take them away from the earth. Why would they pray for Jesus to come if they didn’t believe it could occur in their lifetime?

This prayer speaks to the imminent hope they cherished for Jesus’ appearing.

Jesus’ last words to His church were these, “Surely I am coming soon” (Revelation 22:20). The Greek word for “soon” denotes suddenness and might be more appropriately translated “quickly.”

The Didache, which means the “teaching” in the Greek, is a brief document from the early church. Scholars date it to the first century, perhaps as early as AD 70, although its author likely didn’t compile it as formal document until about AD 300. Many believe it represents beliefs from the time of the apostles — and some regarded it as inspired — but the church later rejected its inclusion in the New Testament.

The first sentence of the treatise provides an extended title: “The Lord’s Teaching Through the Twelve Apostles to the Nations,” and in chapter 16 we find this instruction:

“Watch for your life’s sake. Let not your lamps be quenched, nor your loins unloosed; but be ready, for you know not the hour in which our Lord will come.”

This indicates an imminence regarding the Lord’s appearing, such as would be the case for someone expecting the Rapture to occur at any time.

Although this is not Scripture, it provides further insight into the anticipation of the early believers.

The Rapture Must Happen Before the Tribulation

Why would the apostles portray early believers as eagerly anticipating Jesus’ appearing if the Tribulation — with its widespread devastation and deadly persecution of the saints — had to occur beforehand? Would this be the case if they believed they would see the terrors of the seal judgments in Revelation 6? It’s difficult to imagine that the New Testament saints would have had the same eager expectation if the apostles had taught them that they would see the deadly terrors of the day of the Lord before the Rapture.

The Rapture must occur before the prophesied events of the Tribulation for it to be the imminent event the apostles defined as our “blessed hope” (Titus 2:11–14) and something the early saints awaited with eagerly anticipation (Philippians 3:20–21).

As our world grows darker and increasingly violent each week, there’s no greater solace for our souls that what we find in our hope in Jesus’ soon return. If you have not yet placed all your hope on Him and the blood He shed for you on Calvary, please do so before it’s to late to avoid the time of wrath headed to this world.

My post, Salvation in No Other Name, explains the path to trusting in Jesus alone for salvation and eternal life.