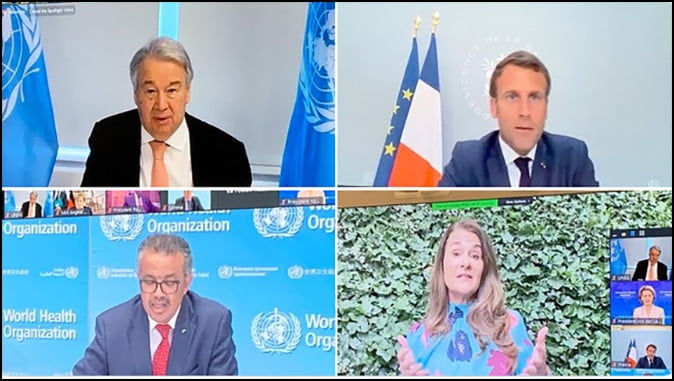 On Twitter yesterday I saw that a new initiative is being launched by the United Nations to help combat the COVID-19 virus pandemic. Leading the charge is UN Secretary General António Guterres and the head of the World Health Organization (W.H.O.) Tedros Adhanom Ghebreyesus. The W.H.O. leader has been the subject of many recent news reports of criticism for being in Beijing’s back pocket when it came to failing to report the initial COVID-19 virus situation when perhaps it could have possibly been mitigated before becoming a global pandemic. We may never know what might have been due to the lack of transparency and parroting of the official China communist party talking points in the initial stages of the crisis.

Since then China has worked tirelessly to shift blame for the global pandemic from themselves to others. President Trump has now stopped funding to the W.H.O. until an investigation has been completed. Many are calling for Tedros Adhanom Ghebreyesus to step down. It is also ironic that he basically got his job at the W.H.O. on the recommendation of China.

Two other interesting people that will be involved in the launch and development of the COVID-19 program will be French President Emmanuel Macron and Melinda Gates.

The UN put out the following release on their website about the initiative:

Secretary-General’s remarks at the launch of the Statement of Commitment and Call for Support for the Global Collaboration to Accelerate the Development, Production and Equitable Access to New COVID-19 Tools

This launch brings together world leaders, the private sector, scientific and humanitarian actors and other partners to promote health, keep the world safe and advance the public good. Human health is the quintessential global public good. And today, we face a global public enemy like no other.

In an interconnected world, none of us is safe until all of us are safe. COVID-19 respects no borders. COVID-19 anywhere is a threat to people everywhere.

The world needs the development, production and equitable delivery of safe and effective COVID-19 vaccine, therapeutics and diagnostics. Not a vaccine or treatments for one country or one region or one-half of the world — but a vaccine and treatment that are affordable, safe, effective, easily-administered and universally available — for everyone, everywhere. A world free of COVID-19 requires the most massive public health effort in history.

Data must be shared, production capacity prepared, resources mobilized, communities engaged, and politics set aside. I know we can do it. I know we can put people first. These new tools must be a very clear and essential example of a global public good. For too long, we have undervalued and underinvested in global public goods — a clean environment, cyber security, peace, the list goes on. So, let this be one vital lesson of this pandemic: the need for new urgency in support of global public goods and universal health coverage.

We are in the fight of our lives. We are in it together. And we will come out of it stronger, together.

“Guided by the belief that every life has equal value, the Bill & Melinda Gates Foundation works to help all people lead healthy, productive lives. In developing countries, it focuses on improving people’s health and giving them the chance to lift themselves out of hunger and extreme poverty.”

As one of the world’s richest person, Bill Gates and his wife have a lot of money to throw around in the COVID-19 vaccine efforts. Bill Gates’ influence in the computer and digital world have brought many people to question his attempts to promote a COVID-19 vaccine that could also include a digital means of identification, etc. It is quite possible that some sort of digital identification system could help lead up to further privacy concerns and security issues regarding the buying and selling of things in the future.

Many Bible prophecy teachers and students have a special interest in the development of the Mark of the Beast technology as spoken of in the Book of Revelation:

“And he causeth all, both small and great, rich and poor, free and bond, to receive a mark in their right hand, or in their foreheads: And that no man might buy or sell, save he that had the mark, or the name of the beast, or the number of his name. Here is wisdom. Let him that hath understanding count the number of the beast: for it is the number of a man; and his number is Six hundred threescore and six.” – Revelation 13:16-18

Some have gone as far as to subtly imply that they think Bill Gates could be the coming Antichrist due to these efforts. I do not think that is the case. Mr. Gates’ role is likely to help further along the technological advances needed to help introduce and implement a digital ID system that will eventually and possibly lead to what the Antichrist will use in the coming Tribulation period.

Emmanuel Macron is the current President of France and is always looking to steal the spotlight on international stage. Macron aims to make France the prime part of the European Union after the exit of the UK in BREXIT. France is currently the second strongest economy in the EU block behind Germany. Macron is a very poor political leader. He can be pushy and obnoxious as we have seen him with his actions towards President Trump at times. We can currently see the poor political leadership and sad shape that France is in by the way “leaders” like Macron have allowed the Islamic immigrants and hordes to practically invade France and the other countries of the EU. Only the strong leaders of Eastern Europe have had some success in resisting the insane calls by the EU globalist elites to flood their borders with people who have no appreciation for Western society and our way of life.

So, what does all this mean? I think many of us know that over the past few months or so the world has been turned upside down with the COVID-19 virus situation and that the world economies have come to a standstill as a result. In the U.S., many political analysts and pundits have become concerned at the blatant and gross violations of the rights of U.S. citizens by some liberal governors in some left leaning states. Many people are remembering Rahm Emanuel’s famous quote that goes something like “never waste a good crisis” when it applies to political purposes. We have already seen the liberal Left in Congress try to use the COVID-19 stimulus bills to stuff them with liberal pork and unrelated leftist agenda items for what was supposed to be help for American taxpayers and businesses during the pandemic crisis.

For students of Bible prophecy, I think it is clear that we can see that there are some serious spiritual warfare going on behind the scenes. Satan and his cohorts are working hard to make changes on the ground that will lead to a one world government that is also spoken of in the Bible. Many politicians around the world are calling for a global and united government in which to deal with the COVID-19 crisis situation. Many politicians and leaders note that the virus doesn’t pay attention to national borders, so I expect the calls for a global government will surely continue as well as increase. I think we need to continue watching the news concerning any potential mandatory vaccinations that may come down the road as well as any development of a digital ID system such as the one like the ID2020 initiative.

Another item of concern of mine is the “contact tracing” that some governments in the world have initiated in the name of “public safety” to enable a type of “surveillance society” that is currently up and running in places like communist China. This “contact tracing” is where the government can use digital means of tracking people via things like cellphones to try to determine when someone has come in contact with a known carrier of COVID-19 virus. We already know that cellphones and RFID implantable technologies are already being used to locate and track people for various purposes. This of course has led to all sort of privacy concerns which are completely understandable.

In fact, China is already using a “social credit score” type of system whereby citizens are given a numeric score similar to a credit score that has resulted in silencing of political dissent by the communist leaders. If your score is lowered due to government protests, bad mouthing the government or any one of numerous other “offenses” then your score can be lowered resulting in reduced “privileges” (like flying, riding a train, getting a job, etc.) in Chinese society. The Bible warns that those left behind during the Tribulation period will face the ultimate surveillance society of the coming Antichrist.

With the COVID-19 crisis there have been concerns about the virus being spread on paper cash and this has increased calls for a digital currency and may end up being the final straw for cash as we know it. This would dovetail exactly with what the Bible describes in the last days and the Antichrist being able to control buying and selling. With all of these changes and things taking place over the past few months, it is imperative that people pay attention to what is going on and place their trust in the Lord Jesus Christ.

As we can see from this article and the events reported here that the times are definitely changing and there is not much time left before Jesus calls the church home to Heaven.

As we see these things taking place and prophecy fulfillment coming into place, we are to remember that the Bible tells us to look up as our redemption is drawing nigh!