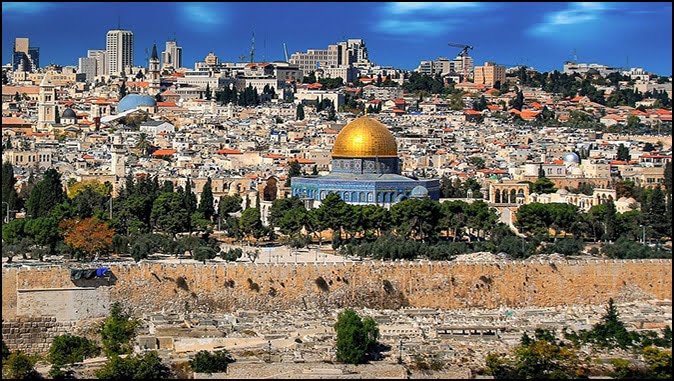 While the world is in the midst of continuing to deal with the COVID-19 virus crisis, Israel is making plans to work towards annexing portions of the West Bank this summer. As part of the coalition unity government agreement between Likud and the Blue and White party, Netanyahu will be allowed to proceed with annexation application as soon as July 1, 2020.

Netanyahu and Israel are hoping to take advantage of a rare opportunity to apply sovereignty to about 30% of the West Bank that is allotted to Israel under the Trump peace plan. The Israelis are anxious to move forward with these plans due to the coming U.S. elections in November 2020. The Israelis know that President Trump is giving them a unique opportunity here and don’t want to miss out on it in case he is not re-elected. There is no guarantee that if they miss out on it that they would get another chance in the future. This is truly a very important time for Israel as it relates to regaining portions of the West Bank.

The Jerusalem Post has an article out today that talks about the annexation situation in detail. The article goes on to report:

The US would support Israeli annexation in the West Bank, but only if such a step was executed within the context of the Trump peace plan, a US Jerusalem Embassy spokesperson clarified to reporters on Friday. “As we have made consistently clear, we are prepared to recognize Israeli actions to extend Israeli sovereignty and the application of Israeli law to areas of the West Bank that the Vision foresees as being part of the State of Israel,” the spokesperson continued.

Prime Minister Benjamin Netanyahu has already spoken of his approval of the Trump peace plan.

“In exchange for the United States recognizing Israeli sovereignty over areas the Vision earmarks as part of Israel, Israel has agreed to freeze all settlement activity for the next four years in areas the Vision earmarks for a future Palestinian State and negotiate with the Palestinians in good faith on the basis of the Vision,” the spokesperson said. “This will give the Palestinians an opportunity to come to the table and negotiate a peace agreement that will result in the establishment of a state of their own. The United States stands ready and willing to offer wide-ranging assistance to facilitate a final peace agreement,” the spokesperson said.

At present a team of Israelis and Americans are working to create a map of the territory in Area C, over which sovereignty can be applied. That process has not yet been completed.

As we can see it looks like Israel will be moving towards annexing the area in Area C that is heavily saturated with Israeli settlements. Israeli Prime Minister Netanyahu has been under increasing political pressure to annex these settlements while the opportunity exists. Israel simply can’t afford to miss this opportunity.

I would tend to think that this could potentially lead to a military conflict between Israel and the “Palestinian” terrorist groups. I would also expect Hezbollah in the north to cause trouble as well and perhaps even Fatah in the West Bank. I believe that any follow through on annexation could cause the Palestinians to feel that a state for themselves would be slipping away from them and that they could lash out. In fact, an earlier news report said that there was an Israeli airstrike within the last 24 hours focused on the Syrian held side of the Golan Heights. It was reported that Hezbollah was trying to move into the area and Israel was weary of an attack as a result. This attack was also supposedly on a cache of weapons in the area. So, this led to the airstrikes as the Israelis felt they had to respond to the potential threat. The Israelis could not afford to have the Hezbollah move into the area, gain access to the weapons cache, and end up launching an attack on Israel.

I think we all know from Bible prophecy that war, not peace, is in the immediate future for the Middle East as the potential Psalm 83 and Ezekiel 38-39 prophecies will need to be fulfilled before the start of the seven-year Tribulation period. I can easily see Israeli annexation plans and implementation as possibly causing the spark for the Psalm 83 prophecy followed by the Ezekiel 38-39 prophetic situation. Of course, this is just a hunch of mine and only time will tell for sure what will happen. We do know that in the future the Antichrist will rise up and confirm a covenant (perhaps peace deal) between Israel and the many. Perhaps that happens after the Psalm 83 and Ezekiel 38-39 scenarios? We shall see and perhaps soon. Keep watching!

According to the “misinformation and historical revisionism” plans of the Palestinians it is being reported by an Israel National News article that the Palestinians have claimed that they have been in the land for the past 6,000 years and that they will with the help of their false moon god allah remove the Jews from their land. The INN article reports:

Palestinian Media Watch (PMW) reports Supreme Shari’ah Judge and Chairman of the Supreme Council for Shari’ah, Mahmoud Al-Habbash said: “They [Israel] know that this land has had people and owners for more than 6,000 years, and that we were here before them, before they were even known in history. “He [Israel’s PM Netanyahu] wants to express his animosity towards us, and his desire not to see a single living Palestinian. He acts out of a conviction deep in his heart and mind that a good Palestinian is a dead Palestinian.

I hate to break it to the “Palestinians” but the God of Israel will have something to say about all of that. We students of Bible prophecy know that Israel has been brought back into the land just as the God of Abraham, Isaac, and Jacob said He would do. Israel is in the land for good. They will never be uprooted again. This is a promise straight from the God of Israel and we can count on it.

I think we would be prudent to keep watching the Middle East as it relates to the Israeli annexation plans. This topic is getting very little reporting on in the MSM news mainly due to the non-stop COVID-19 reporting.

It is my prayer that you all remain safe and keep your focus on the Lord Jesus Christ in these times. Jesus Christ is our rock and everything rests with the Lord. I think we have all been reminded with the COVID-19 situation in the world just how fleeting this life is and how we are not in control. Only the Lord is in complete control. We need to rest in Him and nothing else. Sometimes that seems easier said than done, but we must try hard to do that.

On the bright side, we can see that things appear to be converging like never before. The Bible tells us that one generation in time will see the Lord return and for all things to be fulfilled. And with that, the church needs to be ready as that means the rapture of the church is even nearer.

Keep looking up, for when we see these things coming to pass, that we know that our redemption is drawing nigh!