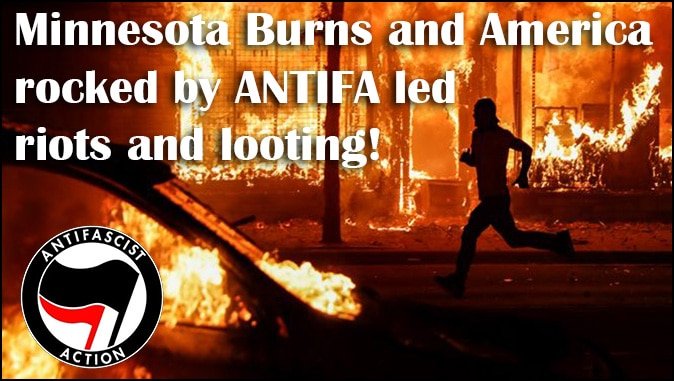 It has been nearly a week of continued protesting and rioting by people upset over the George Floyd situation in Minneapolis, Minnesota. The rioting and looting that have taken place have managed to dishonor the memory of Mr. Floyd with their senseless and mindless acts of criminal behavior. The situation has been compounded on the ground by the interference and hijacking of the protests by the George Soros backed and funded domestic terrorist group ANTIFA. Soros appears to fund the ANTIFA organization through his Open Society Foundation that is used for funding and promoting far left-wing crazy political and activist groups.

Today, President Trump made a great decision today to designate the left-wing ANTIFA organization as a terrorist organization after they have played a prominent and consistent role in the criminal rioting and looting of American cities over the past week.

The Fox News website has an article with the following report:

President Trump announced Sunday that the U.S. government will designate the far-left group Antifa as a terrorist organization.

This comes as Trump has blamed Antifa for riots taking place across the country in response to the death of George Floyd, the unarmed black man who died May 25 while in police custody in Minneapolis, Minn., after an officer kneeled on his neck for more than 8 minutes in an incident caught on video.

“The United States of America will be designating ANTIFA as a Terrorist Organization,” Trump tweeted Sunday afternoon.

It remains unclear exactly who was behind the escalation what began as peaceful protests against police, with accusations lobbed against both far-left extremists and white nationalists. The president has been forceful in pointing the finger at the former.

“It’s ANTIFA and the Radical Left. Don’t lay the blame on others!” Trump tweeted Saturday.

Secretary of State Mike Pompeo was less decisive in stating who is behind the looting, arson, and violence that has taken place. While he called rioters “Antifa-like” during an appearance on Fox News’ “Sunday Morning Futures,” he said, “I think it still remains to be seen exactly how” the situation devolved from peaceful protests to something entirely different.

Minnesota Attorney General Keith Ellison told “Fox News Sunday” he has evidence that people from out-of-state were involved in violent behavior in Minneapolis, but he did not specify whether they were affiliated with any particular group or ideology.

A resolution to designate Antifa as a domestic terrorist organization was introduced in the Senate in 2019, stating that Antifa “represents opposition to the democratic ideals of peaceful assembly and free speech for all.”

The measure, sponsored by Sen. Bill Cassidy, R-La., and co-sponsored by Sen. Ted Cruz, R-Texas, came in response to threats and actions Antifa-affiliated individuals made against ICE officials and journalist Andy Ngo.

After reading that I would have to believe that Minnesota Attorney General Keith Ellison has got to be one of the biggest liars on the face of the planet. Keith Ellison knows exactly who is behind the criminal rioting and looting. There are pictures of him with the ANTIFA handbook and with ANTIFA leaders on the Internet. It is sad to see elected leaders playing a game of violent politics that you would only expect in countries like Russia, China, North Korea, Cuba, etc. This has no place in a country like America. Keith Ellison has the benefit of law enforcement intelligence and the legal system as his disposal. In addition, it was his own son who announced earlier Sunday that he supported ANTIFA as can be seen here:

The son of Minnesota Attorney General Keith Ellison tweeted on Sunday that he is declaring his support for Antifa after President Trump said that his administration would be declaring it a “Terrorist Organization.”

Jeremiah Ellison, who is a member of the Minneapolis City Council, noted in the tweet that he believes “white power” terrorists are actually the ones engaging in the looting, arson and other riot activities as violent sects hijack some of the protests against racial inequality and police brutality in the wake of the death of George Floyd last Monday.

“I hereby declare, officially, my support for ANTIFA,” Ellison said. “Unless someone can prove to me ANTIFA is behind the burning of black and immigrant owned businesses in my ward, I’ll keep focusing on stopping the white power terrorist THE ARE ACTUALLY ATTACKING US!”

It is sad that some one like Jeremiah Ellison has a political seat on the Minneapolis City Council. He is not fit to be a toilet cleaner. Jeremiah’s father is Keith Ellison the Minnesota Attorney General and prominent Islamic politician. Keith Ellison is no stranger to the news headlines as he has been the subject of many news articles in the past regarding his support for Islam. This is the same State of Minnesota that churns out the member of Congress Ilhan Omar as well. Minnesota seems to have a big problem with knowing who to elect into office. Minnesota also has a large Islamic population. There have been videos and photos of hijab wearing looters in many of the stores in Minneapolis. So much for the religion of peace.

Back when Keith Ellison was elected to political office as the Minnesota AG he had a public flare up with President Trump which goes to show that the Ellison’s are a disgrace to Minnesota and to America. Ellison’s liberal and leftist policies and agenda is a threat to America as well as the State of Minnesota. Hopefully, the next elections that come around Minnesota will get rid of their Ellison and Omar problems with their ties to questionable groups like CAIR and ANTIFA. The chickens are definitely coming home to roost for the people of Minnesota. It’s time to clean out the henhouse.

It is also long past time for ANTIFA and other George Soros funded groups to be labeled as domestic terrorist organizations that they truly are. It is absolutely astonishing that George Soros remains a free man at this time. He should have been locked up in SUPERMAX a long time as he is one of the most evil men alive in the world.

The protests that were at one time peaceful have become hijacked by criminal and terrorist elements like ANTIFA that have resulted in deaths, looting, destruction of businesses, and antagonizing of the law enforcement community. While there are always “bad apples” in every barrel, it is wrong to paint the whole law enforcement community as nothing but a bunch of racist white folks looking to snuff out the life of the next person they pullover. This is a prime example of playing the race card and actually trying to divide the country rather than promote unity. We need unity and to come together as a country during this trying times. Sadly, this has long been a Demoncrat political strategy that has been used for years with success. The Demoncrats have no shame and they make themselves into the REAL enemies of America.

When it comes to Bible prophecy, we can see the actions of groups like the Demoncrats and ANTIFA folks in the scriptures. It was prophesized long ago that the time of the end would be a time of lawlessness and sinful behavior being the norm:

“This know also, that in the last days perilous times shall come. For men shall be lovers of their own selves, covetous, boasters, proud, blasphemers, disobedient to parents, unthankful, unholy, Without natural affection, trucebreakers, false accusers, incontinent, fierce, despisers of those that are good, Traitors, heady, highminded, lovers of pleasures more than lovers of God; Having a form of godliness, but denying the power thereof: from such turn away.” 2 Timothy 3:1-5 (KJV)

The Bible tells us that the end times will be a time of ungodliness, violence, hatred, rebellion, and all kinds of abominable works. The growing clout and disruption of our society by far-left wing groups like ANTIFA are a danger to our country and need to be treated as such. I hope that President Trump will further clamp down on violent domestic terrorist groups like ANTIFA. Labeling ANTIFA as a terrorist organization is a good first step, but many more steps are needed such as those taken against the far leftist social media and tech giants.

Another one of the sad things coming out of all the looting and destruction is that on top of all the businesses that closed due to the Coronavirus situation more businesses will close as a result of the actions of groups like ANTIFA. There is no telling how many jobs and lives will be effected by these crazy violent political spasms that are created by groups like ANTIFA.

We need to pray for healing and peace in our country. We need unity not division and destruction. We can see that this situation across the country is just further evidence that the love of many will grow cold in the end times. The riots and destruction are now not about George Floyd, but have been hijacked by left-wing groups to try to further politicize an unfortunate situation and advance a socialist agenda of the radical left. Let us pray that their deeds are stopped and things return back to normal as much as it can. And on another note, the Coronavirus situation seems to have dropped off completely from the news networks. I also noticed that the rioters and looters were not social distancing either. Praying that the spiritual warfare going on in America now is put under control by God.

Keep looking up as we see the increase of end times signs converging on the world as a sure sign that Jesus Christ will be returning soon to rapture the church before the world plunges into the 7-year tribulation that is for unbelieving Israel and unrepentant sinners. Keep praying for the President, our political leaders, law enforcement, healthcare workers, and first responders. The power of prayer is strong!