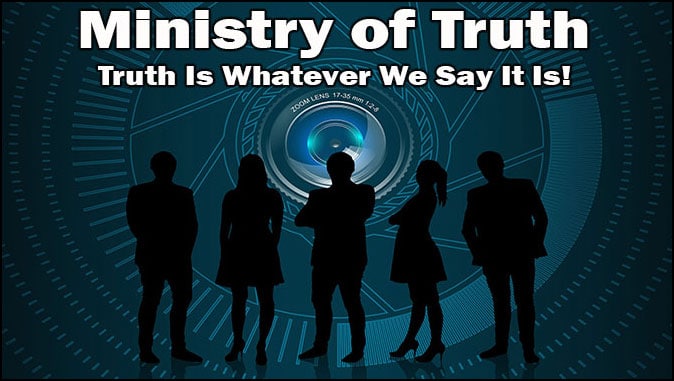 As we have noted here on Rapture Forums, the liberals running the Biden Administration have been on “warp speed” to undo everything former President Donald Trump did while he was in office. While the liberal and progressive tyrants have been out in full-force trying to fundamentally destroy and “rebuild” America in their own twisted and wicked ways, they are those in the progressive media are calling for “George Orwell” type of measures such as creating a “Truth Commission” to combat misinformation and get everyone thinking and speaking on the same level. In Orwell’s terminology this would be the “Ministry of Truth” that we have all heard about. First, they would start with one event or situation and then before you know it everything would fall under the microscope of the people at the “Ministry of Truth” or in this case the “Truth Commission” where truth is whatever they want it to be.

The New York Times came out with an opinion peace that should send shivers down the spine to all freedom loving patriots in the USA. The NYT article went on to suggest:

Joan Donovan, the research director of Harvard University’s Shorenstein Center on Media, Politics and Public Policy, suggested that the Biden administration could set up a “truth commission,” similar to the 9/11 Commission, to investigate the planning and execution of the Capitol siege on Jan. 6. This effort, she said, would ideally be led by people with deep knowledge of the many “networked factions” that coordinated and carried out the riot, including white supremacist groups and far-right militias.

“There must be accountability for these actions,” Dr. Donovan said. “My fear is that we will get distracted as a society and focus too much on giving voice to the fringe groups that came out in droves for Trump.”

These experts were heartened that the Biden administration had already announced a “comprehensive threat assessment” of domestic extremism after the Capitol riots. But they cautioned that categorizing these extremists as “domestic terrorists” — while understandable, given the damage they’ve caused — could backfire. They noted that counterterrorism efforts had historically been used to justify expanding state power in ways that end up harming religious and ethnic minorities, and that today’s domestic extremism crisis didn’t map neatly onto older, more conventional types of terror threats.

The ”Truth Commission or Truth Ministry” would determine what truth is so as to prevent the following:

In the past year alone, we have seen conspiracy theorists cause Covid-19 vaccine delays, sabotage a wildfire response and engineer a false election fraud narrative. We have also seen that if left unchecked, networked conspiracy theories and online disinformation campaigns can lead to offline violence, as they did during last month’s deadly Capitol riot.

I’ve spent the past several years reporting on our national reality crisis, and I worry that unless the Biden administration treats conspiracy theories and disinformation as the urgent threats they are, our parallel universes will only drift further apart, and the potential for violent unrest and civic dysfunction will only grow.

So I called a number of experts and asked what the Biden administration could do to help fix our truth-challenged information ecosystem, or at least prevent it from getting worse. Here’s what they told me.

First, they need to get a “Reality Czar” to control all of it:

Several experts I spoke with recommended that the Biden administration put together a cross-agency task force to tackle disinformation and domestic extremism, which would be led by something like a “reality czar.” It sounds a little dystopian, I’ll grant. But let’s hear them out. Right now, these experts said, the federal government’s response to disinformation and domestic extremism is haphazard and spread across multiple agencies, and there’s a lot of unnecessary overlap. Joseph Goebbels would be proud.

And to help analyze and combat the “misinformation” they would create a task force that would work in hand with “Big Tech” to:

This task force could also meet regularly with tech platforms, and push for structural changes that could help those companies tackle their own extremism and misinformation problems. (For example, it could formulate “safe harbor” exemptions that would allow platforms to share data about QAnon and other conspiracy theory communities with researchers and government agencies without running afoul of privacy laws.) And it could become the tip of the spear for the federal government’s response to the reality crisis.

While you can read more of the article at the link at the beginning of this article, you can easily see that the violations of “truth” are always “right-wing” and “extremist” groups that spread the misinformation. There is never any mention of Antifa, BLM, or other left-wing groups out there. This is where the potential for abuse of conservative, Christians, pro-family, pro-life, and other right-wing groups that don’t mindlessly follow the left’s group-think on everything. Afterall, they can’t have anyone thinking for themselves or for thinking differently. While the lost of lives at the January 6 Capitol protests was terrible, it surely wasn’t the worst to have ever occurred in the country. There have been many events that occurred by Democratic groups back in the 60s, 70s, and 80s such as the Capitol building bombing carried out by left-wingers. But you will never any of that in the media. You can read more about these events in this article here.

I would tend to expect that with more government control coming down the road it will help to further the coming one world government where everyone will fall under the coming Antichrist. The fundamental changes being implemented now and in the near future will clearly put the America under control of the globalists and lead to further erosions of personal liberty and freedom. While that can be sad and depressing, we know that God will work out things so that in the end everything will work out for us and bring glory to His name. We need to just leave it up to Him to handle the details. We need to keep the faith and press forward with the work that He has called us to do.