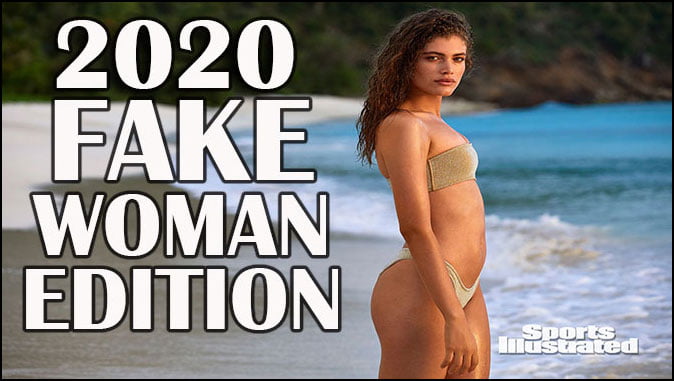 The culture wars raved on this week when it was announced that Sports Illustrated magazine will be releasing its latest Swimsuit issue with the first-time appearance of a transgender model. Apparently, the magazine has fallen in line with the politically correct LGBT diversity crowd and is now featuring fake women in its annual swimsuit edition. It appears that even men’s sports magazines are not immune from the LGBT diversity crowd who are trying to pass men off now as women. This is despite the fact that a transgender “woman” is still a man even down to their DNA.

Fox News released an article about the announcement and reported:

Valentina Sampaio has made Sports Illustrated Swimsuit history by becoming the first transgender model to appear in the iconic special edition magazine. On Friday, the 23-year-old Brazilian native confirmed she was named a 2020 Rookie for the publication’s upcoming issue, out July 21. Sampaio reacted to the news on social media in an emotional post. “I am excited and honored to be part of the iconic Sports Illustrated Swimsuit Issue,” she wrote.

“The team at SI has created yet another groundbreaking issue by bringing together a diverse set of multitalented, beautiful women in a creative and dignified way. I was born trans in a remote, humble fishing village in northern Brazil. Brazil is a beautiful country, but it also hosts the highest number of violent crimes and murders against the trans community in the world — three times that of the U.S.,” she continued.

Sampaio concluded: “Being trans usually means facing closed doors to peoples’ hearts and minds. We face snickers, insults, fearful reactions and physical violations just for existing. Our options for growing up in a loving and accepting family, having a fruitful experience at school or finding dignified work are unimaginably limited and challenging.” She also penned an essay on SI Swimsuit’s website, in which she thanked the magazine “for seeing and respecting me as I truly am,” and “for understanding that more than anything, I am human.”

Sampaio has been taking the modeling industry by storm this past year. In August, Victoria’s Secret hired her as its first-ever openly transgender model. And in 2017, she covered Vogue Paris, Vogue Brasil, Vogue German, and worked with major fashion brands Marc Jacobs, Dior, and H&M.

In a world that is growing more delusional with each passing moment, it should not be surprising that we are seeing this happen with Sports Illustrated. The is just the latest salvo in the culture wars that is trying to make what is an abomination into something “normal” which can never happen. It doesn’t matter how much a man can make himself look like a woman, he is still just a man all the way down to his DNA. You can mutilate yourself and/or implant yourself to try to match your perceived sexual orientation, but the fact is that a person’s sex is determined in the womb. And it can’t be changed outside of the womb.

The LGBT crowd is working overtime to try to normalize their sexual deviancy and the truth is they are finding many companies willing to bow down to their sexual perversion for the almighty dollar. Company profits and being “progressive” have actually caused these people to become what we call “regressives” in that they are going backwards in every way.

The LGBT lifestyle is not one that should be promoted. It is a lifestyle that is riddled with increased rates of depression, anxiety, suicides, certain types of cancers, HIV/AIDS, and a host of other physical and psychological problems. I believe that it is the work of satan who has effectively convinced people to question the Bible’s narrative that he made mankind male and female. Satan is clever in that he has used his age-old trick of deception in having people ask “Did God REALLY make them male and female?” This trick of deception worked so well in the Garden of Eden and he uses it all the time to get mankind to question what God has done and with disastrous results.

With this latest transgender model swimsuit issue we are seeing more and more signs of deception and normalization of perversion in society. This is one of the signs of the end times in that mankind will become perverse, immoral, and sexually reprobate. We see that in our society with every passing day. We pray that the young children will be spared of the influences of these sexually reprobate degenerates who are trying to normalize their sinful lifestyles. We can definitely see that the time of the rapture of the church is getting closer and closer with each passing day.

Keep looking up, for when these things come to pass, our redemption is drawing nigh!

Please pray for these people caught up in the LGBT lifestyle.