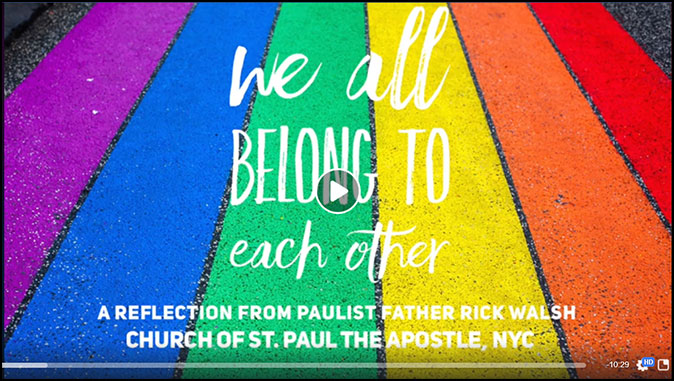 A most disturbing news report came out the other day where a New York City “Paulist” priest committed blasphemy and defiled the Lord’s character by referring to Him as “lesbian, gay, bisexual, transgender, and queer” in a clear effort to try to justify the LGBT lifestyle that has crept into the so called “church” today. While the above declaration is shocking it is not surprising as the “church” is fully participating in the “great falling” away from the faith that is predicted in the end times.

That a pastor, priest, or any other church leader could support the LGBT lifestyle would have been unheard of just 30-40 years ago is just another sign of the times as the world heads toward the coming seven-year Tribulation period. The support of the LGBT lifestyle is one of the main ways that satan is destroying the church today. The church is not being destroyed from outside, but rather from inside by church leaders who have compromised the Word of God and fallen away from the Words of the Lord that are essential to the Christian faith.

The LifeSiteNews website has an article on this topic and reports:

On June 28, 2020, Paulist priest Rick Walsh offered “a reflection” entitled “We All Belong to Each Other” at St. Paul the Apostle Catholic Church in New York City; the parish is the motherhouse of the Paulist order. On June 25, 2020, Walsh also was the “celebrant” for the parish’s Pride Mass sponsored by the Paulist’s LGBT ministry “Out at St. Paul. (OSP)” During his “reflection” Walsh said:

On June 16, 2018, concerning an article from the gay-periodical “The Advocate,” in which they reported that Pope Francis’s “definition of a family excludes same-sex couples,” Out at St. Paul stated: “Pope Francis is wrong.”

Several issues are noteworthy here. First, the “church” spoken of in this article is that of the “Roman Catholic church” which is not representative of REAL Christianity. Real Christianity is based on the grace thru faith in Jesus Christ’s completed work on the Cross, his death, burial, and resurrection for salvation plus nothing else. This is a traditional and conservative Christian belief that is fundamental in the true Christian faith. The RCC believes that salvation is through “grace plus works” which includes RCC membership, Mary worship, sacraments, praying to dead saints, rosaries, and a host of other ridiculous means of gaining entry into Heaven. This is blasphemy in pretty much stating that Jesus Christ’s works were not enough to save a person. That they must “help” finish what Jesus started and couldn’t do by himself. That Jesus needs out help. This is blasphemy, but unfortunately it is standard RCC teaching.

The RCC is front and center in trying to cater to the whims of the LGBT lobby. They are just about, after satan, the chief architects in destroying Christianity and indirectly influencing other Christian denominations of joining in the abominable unity of Christianity and the LGBT groups. The church of the end times is one that falls away from the genuine and traditional faith practiced by the early church. Nothing screams falling away more than letting unrepentant LGBT members become pastors and church leaders. This doesn’t even mention the numerous sex scandals and pedophile priests that have been exposed over the years. This is the “fruit” of satan’s work on the so-called church of the RCC.

The LGBT is not just the only area where the RCC has fallen away. The RCC has been actively promoting for years of merging with Islam into what some have called “Chrislam” despite the fact that neither the RCC or Islam worship the God of the Bible. The RCC worships a false Jesus and Islam worship a different god altogether. The God of Christianity is not the same as the god of Islam. Given that Islam is not friend of LGBT groups, it will be interesting to see how the RCC and Islam will move forward over this issue in the future. Some Islamic countries regularly kill and torture LGBT people.

I think many people have known all along that the RCC is probably behind the “Mystery Babylon” religion of the end times. It is likely to be a hodge-podge mixture of various religions into a one world religion lead by the RCC. This in turn will be led by the coming False Prophet as spoken of in the Bible. He will demand that people worship the coming Antichrist. But whatever the one world religion becomes it will be satanic to the core. It is sad to see the church fall into the world as Jesus Christ told us that He was not of this world and that He doesn’t want us to be of this world either. Christians know that our citizenship is in Heaven, not in this world.

All of this is just one more sign along with all the others that time is definitely getting short and that the rapture of the church of course is closer than ever. I encourage all our readers to keep looking up and to take comfort in knowing that Jesus Christ will not forsake or leave us. He is coming to get us as He has promised. Keep looking up!!!