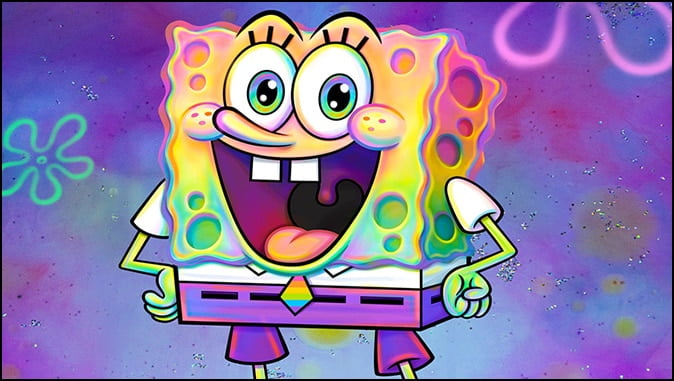 Well, the craziness and lunacy from the LGBTQ+ crowd has claimed another victim in their war against Biblical morality and principles. This time the victim is popular animated cartoon character SpongeBob Squarepants. Many people had suspected that he would be “outed” as gay and eventually be used by the LGBTQ+ crowd to try to normalize their sexually deviancy. This seems to be another ploy in the culture wars to normalize sexually deviant and immoral lifestyles to our generation of children. It seems nothing is safe from the perverts anymore on TV.

The LGBTQ+ crowd and leftist liberals are hellbent on corrupting our young children continue to make calculated moves to focus and aim their deviant lifestyles to young children who are generally some of the most impressionable age groups. The normalizing of sexually deviant behavior and the targeting of young children can be seen all over the country with the “Drag Queen” story hour that has become popular in some liberal cities.

The Jerusalem Post has an article that reported this most unfortunate development:

In celebration of LGBT Pride month, Nickelodeon tweeted images of three of their iconic characters – including, to the surprise of many, SpongeBob SquarePants.

The tweet made by Nickelodeon – which read “Celebrating #Pride with the LGBTQ+ community and their allies this month and every month” – included images of Korra from The Legend of Korra, Schwoz Schwartz from Henry Danger and SpongeBob SquarePants of the eponymous series.

Most of the tweet didn’t come as too much of a surprise. Korra’s sexuality has been well-known for years, with it being written into the script and being part of the series finale in 2014. Schwoz, who unlike the other two is a live-action character, is played by Michael D. Cohen, a transgender actor who transitioned decades ago.

However, for SpongeBob, the revelation may come as more of a surprise. The character is one of the most iconic in the channel’s history, with the famous show debuting in 1999 and being a mainstay on the channel ever since, being broadcast all over the world in a variety of languages. Its popularity has led to multiple awards, two theatrical films (with a third slated for release in August 2020), multiple video games, a critically acclaimed Broadway musical and two currently in-development spin-off series.

Fans have speculated about the iconic sponge from Bikini Bottom’s sexuality for years. However, while the series has never given any concrete answers, there have been hints of an attraction to women, notably towards series mainstay Sandy Cheeks.
In fact, the series has gotten embroiled in controversy before regarding the character’s sexuality. The most notable incident occurred in 2005, when an Evangelical group Focus on the Family accused SpongeBob of “advocating homosexuality” after a pro-tolerance organization made a video including clips of SpongeBob SquarePants to promote diversity and tolerance.

Regardless, while Nickelodeon seems to have confirmed SpongeBob’s status as a member of the LGBT community, they did not specify where exactly he sits on the spectrum, which will no doubt keep fans debating.

The article went on to further report:

Interestingly, SpongeBob’s creator, Stephen Hillenburg, had weighed in on the issue in 2005, having stated that the character, alongside his best friend Patrick Star, is asexual.

“It doesn’t have anything to do with what we’re trying to do,” Hillenburg told Reuters at the time.

“We never intended them to be gay. I consider them to be almost asexual. We’re just trying to be funny and this has got nothing to do with the show.”

He added that there are “more important issues to worry about. I really don’t pay much attention to this.”

Interestingly, sponges are asexual in real life, as well.

While it is unknown what Hillenberg would have thought of Nickelodeon’s tweet, due to his tragic death in 2018, fans celebrated Nickelodeon’s tweet over social media. However, the channel has yet to officially comment any further about the subject at the time of writing.

It is developments like this where the LGBTQ+ lifestyles are paraded around as being normal that is really disturbing. Young children should not be subjected to the sexual thinking and whims of sexually deviant people. The producers of such shows should never be allowed to work around children nor be able to create perverted shows that are sexually suggestive in nature to children. This is totally and wholly inappropriate. Just as “Drag Queen” story time has no business being around children in a public school or public library setting.

I am very concerned that the normalization of these lifestyles, which the Bible refers to as an “abomination” before the Lord, will only increase as the world spirals downward towards the coming 7-year Tribulation period where God pours out His wrath on unbelieving Israel and unrepentant sinners. While homosexuality has been with mankind through out the course of human history, the blatant and “in your face” promoting of this sexual destructive lifestyle is completely over the top.

We need to pray especially hard for our young children as they are facing the likes of evil never before encountered in mankind’s history. Fifty years ago you would have rarely heard of someone being a homosexual but today it is all over the place. I believe the rise of homosexuality is clearly another sign that we are living in the end times spoken of by the Bible. Please join with me in prayer for our young people who are being preyed on by liberal and left-wing nuts who think that exposing children to sexually deviant lifestyles is a good thing.

I am sure that this promotion of sexual immorality is disturbing and upsetting to our Heavenly Father. I am also sure that he would want us to speak out and protect the little children that are being subjected to such evil agendas that come straight from the pit of Hell.

If you have children who watch the SpongeBob Squarepants cartoon show you might want to seriously reconsider letting them watch it. There is likely to be more “inclusive” signs and inappropriate sexually suggestive promotions going forward for the LGBTQ+ lifestyles now that he has been “outed” as LGBT by Nickelodeon.

This is just one more sign to show that we are clearly living in the last days. And we know that when we see these things coming to pass, that we are to lift up our heads, for our redemption is drawing nigh.

Please pray for the little children that are being satanically targeted by these evil people.