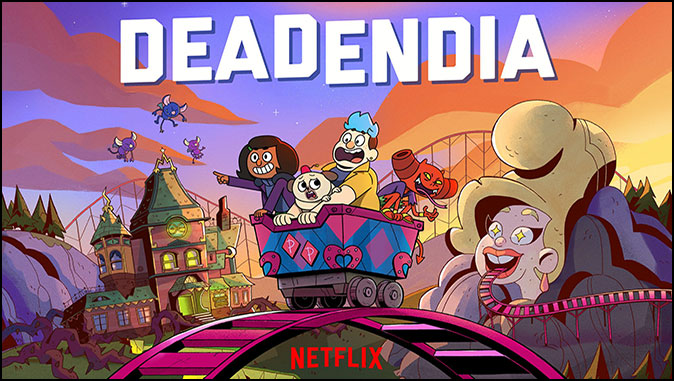 Everyday it seems the LGBTQ+ folks come out with a new way to try to “normalize” their degenerate lifestyles and push it on our children. One of the latest moves by the LGBTQ+ supporters is a new animated kids series from NetFlix that features “queer-friendly” characters and storylines. While I am not familiar with the novels of Hamish Steele this new move to push this animated series featuring LGBTQ+ “friendly” characters and storylines to kids is revolting. There have already been numerous attempts to normalize the LGBTQ+ lifestyle recently with Spongebob Squarepants coming out as gay as well as “Thelma” outed as gay in the remake of Scooby Doo. I guess the perverts will never be satisfied until everyone on TV is “gay”.

DeadEndia, a horror-comedy series of graphic novels from Eisner Award-winning comic book artist and animation director Hamish Steele, has been lauded for its art, touching tales of adolescence, and inclusion of LGBTQ storylines. Now, Steele and his creation are looking to break new ground in a different medium.

Netflix announced Thursday that the graphic novels will be adapted into a new animated kids series, which is set to launch on the streaming platform in 2021. At a time when there’s a void left by Steven Universe (which ended in March) and She-Ra and the Princesses of Power (which ended in May), this already seems to tick a lot of the same boxes.

DeadEndia is set in the space of a theme park and the haunted mansion that resides there. Barney, Norma, and magical talking-dog Pugsley are trying to balance their summer jobs with facing a barrage of supernatural forces—including demonic game show hosts and sleep-sucking witches. Courtney, a thousand-year-old demon, becomes their guide to the underworld multiplane.

Barack became the first trans actor to appear on-screen in a Disney Marvel movie, though he only showed up in a background capacity in the Spider-Man: Homecoming sequel. Leupp featured multiple times on Will & Grace as drag persona Miss Coco Peru and has appeared in entertainment as far back as 1995’s To Wong Foo Thanks for Everything, Julie Newmar. Barack will voice Barney, a trans teen, on DeadEndia, while Leupp will voice Pauline Phoenix.

“DeadEndia is about terrifying demons, vengeful ghosts, and mysterious magic,” Steele said in a statement. “It is also about coming of age in a world that wasn’t made for you. It’s a drama about found family, identity, and making mistakes. And of course, it’s a laugh-out-loud comedy! I’ve always dreamed of making the show I needed as a lonely, horror-obsessed closeted gay kid and thanks to Netflix and our ridiculously talented, diverse, and representative writers room and crew, we have shot way past my dreams and into wildest fantasy territory!”

Steele won the Eisner Award in 2018 for Promising Newcomer with his graphic novel Pantheon: The True Story of Egyptian Deities. He began the world of DeadEndia as an animated short that he produced in 2014, shown below.

The Bible is certainly clear that homosexuality and any of the LGBTQ+ lifestyles are an abomination to the Lord. This is because they have perverted a divine institution of marriage that is a model of the Lord’s relationship with the church. Satan has convinced people that these unholy LGBTQ+ alliances are acceptable and that God’s statements in Leviticus 18:22 – “Thou shalt not lie with mankind, as with womankind: it is abomination” is not valid anymore. Satan has tricked people into forming unnatural relations in an attempt to pervert and disobey God’s command to go forth and multiply over the earth. Everyone knows that two men and two women can’t procreate. And sadly the world falls for Satan’s lies and tricks just about every time.

The fact that the perverts in Hollywood and in the movie-industry have set their sights on our children is very disturbing. It is clear that they are intentionally targeting younger age groups to push their abominable practices. Kids are very impressionable and it is very sneaky that Satan has his minions are targeting our schools to reach our precious children with their filth who are totally unaware of the evil being presented to them in a disguised form of animated television shows.

It is imperative that parents speak out to companies like NetFlix that produce these shows and target our young children. Without pressure from parents and pro-family groups the evil presented to our children will just grow. And with the way things are going it is clear that Hollywood and the leftist liberal entertainment companies have no intention of stopping what they are doing. We must take action and protest such deviant and evil things.

Evil running rampant is an end times sign that we are getting closer and closer to the return of the Lord Jesus Christ in the rapture. Sexual deviancy is a prime example of evil and perversion running rampant in our society.

Folks, pray for the children and pray for entertainment companies to come to their senses regarding the programming they are offering our children. And if these companies won’t listen to our protests, then maybe they will listen to the voice coming from their pocketbook in the form of cancelled memberships and lower ratings. The almighty dollar is their god and sometimes you have to strike them like they did the golden calf of ancient times.

Keep looking up folks, the days are drawing darker and more sinister, and our redemption is surely growing nigh with each passing day.