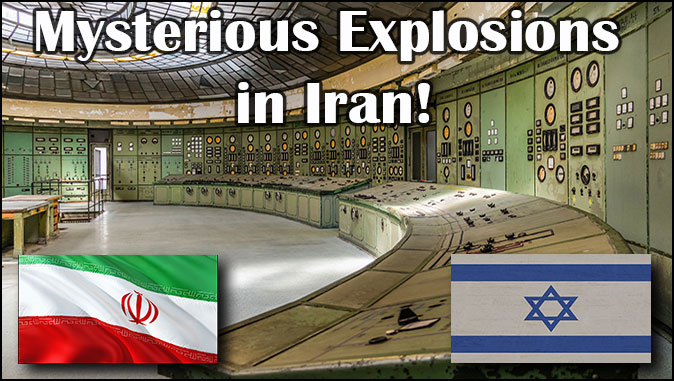 Well, it didn’t take long before the heat was turned up further on Iran. Whether it is due to sabotage or not, there have been a lot of mishaps in Iran over the past week. Much more so than normal and raises the idea that there could be foreign interference as a result. Tehran is tight-lipped about the situations probably out of embarrassment. Time will tell if we can get to the bottom of the incidents. Iran says they know what happened on a couple of incidents but they are not giving out any clues.

There is news coming out of Iran that there was a fire at a power plant and a chlorine gas leak at a petrochemical company. This is on top of the explosion at a gas storage facility near Tehran and another explosion at a medical facility in Tehran.

The Jerusalem Post has released an article on the latest mishaps and reports:

A fire broke out at the Shahid Medhaj Zargan power plant in the city of Ahvaz in southwestern Iran on Saturday and a chlorine leak sent dozens of employees to the emergency room at a petrochemical plant in the same region on Saturday, according to Iranian media. The fire at the Zargan power plant broke out after a transformer exploded, according to the semi-official Fars News Agency. A spokesman for the Iranian electricity industry later told Iranian media that the “connection” of one of the transformers caused the fire, not an explosion. No injuries were reported in the incident.

About an hour after the fire at the power plant, 70 people were injured due to a chlorine gas leak at the Karun Petrochemical Company, located south of Ahvaz, according to the Iranian IRNA news agency. The leak occurred after a pipe from a tank at the site ruptured. The cause of the rupture is being investigated, according to a local official. Initial measures were taken to close the valve and cut off the chlorine, immediately after the incident, but 70 people inhaled chlorine gas in the meantime, according to IRNA. These two incidents are the most recent in a string of incidents that have affected Iranian infrastructure in recent days.

On Friday, June 26, an explosion was reported at a gas storage facility near Tehran. Iranian media reported that the incident happened in a “public area” in Parchin and not at a military site located nearby. Western security services believe Tehran carried out tests relevant to nuclear bomb detonations in Parchin more than a decade ago. Iran denies this. Days later, on June 30, another explosion happened at a medical facility in Tehran, killing at least 17 people. Two days later, a mysterious fire broke out at the Natanz nuclear facility in Isfahan Province, Iran damaging a new factory within the facility which, according to experts, was built with the purpose of producing centrifuges on a large scale.

Iranian officials said on Friday that they believe the fire that broke at the Natanz facility on Thursday, may have been caused by a cyberattack and that Israel and the US may be responsible. On Friday Tehran announced that it had identified the source of fire but “due to security considerations” will not publish their findings at this time. Prime Minister Benjamin Netanyahu refused to address the incident in a press conference on Thursday.

With the possible Israeli annexation of portions of the West Bank later this month, there is a lot of tension in the region. These mysterious explosions in Iran some believe were attributed to cyberattacks on the Iranian facilities. Some could have been just normal human error mistakes, but the number of incidents over the past week is very unusual to say the least.

Another Jerusalem Post article is analyzing the situation and made the following observations:

Now, after five mysterious explosions in Iran over the last two weeks, including one at a missile factory and another – the most significant – at the Natanz nuclear facility, it will be telling to see whether there will be any major shake-ups inside Iran as a result.

On Monday, some 120 Iranian legislators, out of 290, summoned President Hassan Rouhani for questions in a move that – if Supreme Leader Ali Khamenei lets it go through – could lead to impeachment. The stated reason is the plunging rial and the high cost of basic goods in the country. But it could also conveniently be a way to place responsibility on someone for the recent string of embarrassing explosions.

After the series of mysterious attacks, the Iranians on Sunday admitted that the fire at Natanz last week caused serious damage and set the country’s nuclear program back by months. This was not just an accident or a gas leak, as the Iranians had said about the other incidents. This was a hit against high-speed centrifuges used to enrich uranium at a level that can be used as fuel for an atomic bomb.

“It’s possible that this incident will slow down the development and expansion of advanced centrifuges,” Behrouz Kamalvandi, spokesman for the Atomic Energy Organization of Iran, was quoted as saying on Sunday. “There were advanced equipment and precision measurement devices at this site that were either destroyed or damaged.”

And while that type of setback will not be enough to stop the nuclear march, it does have a chilling effect and sows insecurity in the hearts of the Iranian leadership, as well as the citizenry.

According to Raz Zimmt, an expert on Iran at the Institute for National Security Studies (INSS) in Tel Aviv, the string of incidents is having an impact on the Iranian public, especially following the killing of al-Quds commander Qasem Soleimani in January, the subsequent Iranian downing of a Ukrainian airliner, the coronavirus that is wreaking havoc in the country and the economic crisis.

These events add to feelings of insecurity among the public and to blaming the government for being unable to provide basic security. It matters less to the public how these incidents continue to occur, but rather that they keep occurring and that the government seems helpless to stop it.

“Fingers are pointed at the regime that it does not provide its citizens with security,” Zimmt said in a podcast on Monday.

This adds to tension between the regime and the public, a tension that has reached a boiling point. It also adds unwanted pressure on the government already under intense pressure as a result of the US economic sanctions and the coronavirus.

This makes the government feel insecure, and insecure leaders under pressure, Zimmt said, may feel compelled to respond. And that response could either come against perceived domestic threats or threats from abroad.

I think we should keep an eye on the situation in the Middle East despite all the media attention on the Coronavirus and BLM situations. You never know when something could spiral downward in the Middle East. I would suspect it will continue to stay heated and that with the annexation coming up could help bring things to a head sooner rather than later.

Let‘s keep watching. And of course, keep looking up, for our redemption is drawing nigh as we see all the end times signs converging around us.