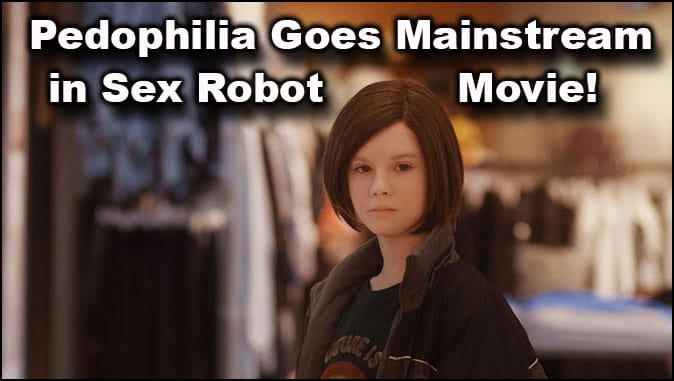 Just when you think the human mind couldn’t get anymore sexually depraved than what we are seeing in today’s movies, I came across this sad and sick article regarding an independent film that features an android child sex film. It was supposed to be shown at the Melbourne International Film Festival but has now thankfully been pulled from being shown.

With all the news regarding Jeffrey Epstein and his sick and perverted lifestyle, it is beyond imagination that people could be putting out films that feature robot child sex movies. The human mind is totally corrupted with sin and movies like these show just how depraved and sinister people will go in pushing the envelope on sexual depravity.

The Sydney Morning Herald came out with the following article regarding this movie:

The Melbourne International Film Festival has dumped a movie in which an android child has sex with its human “father”, after a leading forensic psychologist warned it “normalises sexual interest in children”.

Austrian director Sandra Wollner’s “The Trouble With Being Born”, which won a special jury prize at the Berlin Film Festival in February while also prompting audience walkouts, was due to screen at the online-only MIFF 68½, which opens on August 6.

While it does not feature any explicit sex scenes between the “Papa” character and his android daughter – played by a real 10-year-old disguised with wigs, a silicon face mask and a fake name – the sexual nature of their relationship is clearly implied.

Dr Karen Owen, a forensic pychologist and former manager of Corrections Victoria’s Sex Offender Programs, viewed part of the film but said she was so disturbed by it “I ceased watching the movie and have deleted the link”.

The film was “just wrong in so many ways,” Dr Owen said. “Notwithstanding the artistic intent of the movie, without question it would be used as a source of arousal for men interested in child abuse material.”

Dr Owen said the subject matter “normalises sexual interest in children” and would almost certainly lead to the movie being “used … for arousal and masturbatory purposes”. She added that images put to such use “do not have to be explicitly pornographic in nature”.

Dr Owen said the fact the film would be viewed via streaming, with viewers likely to be alone, exacerbated the risk.

Fellow forensic psychologist Dr Georgina O’Donnell, who has not seen the film but has considered detailed descriptions of it, said Australian Federal Police classifications of Child Exploitation Material included laws against depictions of real children, anime, cartoons, and the use of AI children for sexual gratification.

“It is illegal in Australia to use ‘simulated’ children for sexual gratification,” Dr O’Donnell said.

After The Age informed MIFF of the comments by Dr Owen and Dr O’Donnell, MIFF decided to withdraw the movie. Late on Thursday it informed Wollner of the move over Skype.

In a brief statement, the festival said it had decided to withdraw the film “after receiving expert advice and following further community consultation” regarding both the content of the film and the online context of the festival.

Artistic director Al Cossar said: “The safety and wellbeing of the MIFF community and the broader Australian public is the festival’s paramount concern. While the Australian Classification Board had cleared the film to screen in this year’s festival, we have decided to remove the film.”

Finally, the director defended her film:

Director Sandra Wollner said in a statement she shared Dr Owen’s concerns, but defended her film from charges it endorsed the behaviour it depicts.

“We strongly believe there is room for this kind of dealing with the world and that art, by its very nature, has to arouse uncomfortable questions. The film is in no way endorsing or promoting child exploitation, but looking at a suggested dystopia, some elements of which are already discernible in our present reality.”

Wollner added that the film had been made “in full accordance with Austrian and German law, where the film is classified and viewed strictly as a work of art”. She has previously pointed to the great care taken to protect the identity and wellbeing of her young star, including having a silicon face mask applied fresh each day, wigs and a fake name.

One of the sad things about this movie is that it won an award in the Berlin Film Festival. The director of the movie tries to justify the movie by saying it did not violate any Austrian or German laws and that it is classified strictly as a work of “art”. The excuses of being “art” are pathetic and totally ridiculous. I think this sort of stuff shows how sick and perverted mankind has become in this day and age. There have long been “sex toys” like “blow up dolls” that probably introduced the concept of this sort of stuff and with the advancement of technology we now have “sex robot” movies. God help us!

I think the child actor will probably never be the same after participating in this movie. Despite all the “care” taken to “protect” the child, it is absurd to think that having children around this sort of stuff is appropriate for any reason. And calling it “art” does not make it right either. Would having pre-teen or middle school age girls standing nude in front of a class of art students doing sketches make it “art” so that is was appropriate? Absolutely not, so why in the world would anyone with any gray matter in their head think it would be OK to do this with this film? I am just at loss for words.

Sadly, the increase in sexual depravity is just another sign of the end times. We know from the Bible that the world will grow more and more sexually depraved and perverted as the world moves closer to the Tribulation period. We have seen the rise of the LGBT movement, human sex trafficking, and a host of other sexually perverted lifestyles being promoted these days as normal. Kids are being taught in schools that they can be whatever gender they think and fell they are at any given moment. The world is clearly past the point of where right is wrong and wrong is right. I’m sure Satan gets a big kick out of this foolishness.

Keep looking up as the signs are all around that time is short for the rapture of the church. God will soon have Jesus Christ gather His church and the rest of the world will enter the dreaded seven-year Tribulation period where unrepentant sinners will face the wrath and judgment of God.

Please pray for our children as they grow up in these last days and they are bombarded with this sick filth that is paraded around as “art”.