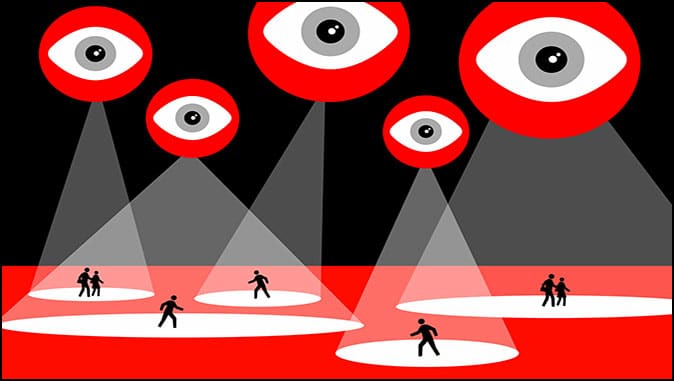 The Rapture Report – Is “Big Brother” on the Rise in America with New “Domestic Terrorism” Laws?
By Chris Schang

After the January 6 “attack” on the U.S. Capitol, some lawmakers are putting together new legislation to combat what they are calling “domestic terrorism” by adding more “tools” to the arsenal of the government to monitor for what they are calling domestic terrorists. There is current a bill being introduced by a bipartisan group of lawmakers that is called the “Domestic Terrorism Prevention Act Of 2021.” This bill would expand the surveillance and police powers in order to fight “domestic terrorism” in the country.

An article at the Foundation for Economic Education (FEE) reported:

“America must be vigilant to combat those radicalized to violence, and the Domestic Terrorism Prevention Act gives our government the tools to identify, monitor and thwart their illegal activities,” Congressman Brad Schneider, one of the bill’s lead sponsors, said. “Combatting the threat of domestic terrorism and white supremacy is not a Democratic or Republican issue, not left versus right or urban versus rural. Domestic Terrorism is an American issue, a serious threat that we can and must address together.”

The article also went on to state that the bill is drawing criticism from both sides of the aisle including from Former Democratic Congresswoman Tulsi Gabbard:

We all surely agree that true domestic terrorism is reprehensible. But many progressive lawmakers are speaking out against the hasty push to expand government power and warning of the threat it poses to civil liberties. They warn these powers will undoubtedly be used against many more people and disfavored groups than just violent radicals like those who attacked the Capitol.

“We don’t have to guess about where this goes or where it ends,” Gabbard argues, “When you have people like former CIA Director John Brennan openly talking about how he’s spoken with appointees and nominees in the Biden administration who are already starting to look across our country for these types of movements… that in his words make up this ‘unholy alliance’ of ‘religious extremists,’ ‘racists,’ ‘bigots’ … even ‘libertarians.’”

“So, when you look at their process as they’re building this profile of a potential ‘extremist,’ what are we talking about?” she asked. “Are we talking about evangelical Christians? Somebody who is pro-life? Libertarians? People who attended a Trump rally?”

“[This would] lead to a very dangerous undermining of our civil liberties…and a targeting of almost half the country,” Gabbard concluded. The concern is that government powers authorized ostensibly for use against “domestic terrorists” would wind up being wielded against much broader swaths of society.

A letter signed by 10 progressive House Democrats, including Representatives Rashida Tlaib, Alexandria Ocasio-Cortez, Ayanna Pressley, and Ro Khanna, calls on leadership to “reject reactionary demands to further erode the rights and liberties of the American people.”

I find it interesting that there are even Democratic Congress members who are opposing this bill. Some of these names of the Democrats is surprising to say the least.

After the January 6 incident there has been a push to label Evangelical Christians, conservatives, and pro-America patriots as being members of the “Trump cult” who need to be “de-programmed” “re-educated” and “cleansed” from their errors. This has been talked about openly by some Democrats and Biden administration officials over the past couple of months and gained even more traction after the Capitol incident.

Of course, the there is no “definition” of domestic terrorist, but it is not hard to see who would be the “targets” of such domestic terrorism efforts. You can better believe that those who do not embrace the Left-leaning, anti-God, and progressive agenda will be the first people put into the cross-hairs of this proposed bill.

These kinds of bills and legislation are similar to what happened in Germany back before World War II. There is a lot of similarities between what was the German Reichstag Fire and how they went about adding more powers to the government and what we see now happening after the January 6 Capitol incident. It almost seems as though we are traveling down the same road in 1932 here in 2021.

With Big Tech helping to censor conservatives, Bible believers, and “Trump” supporters, it does not take much imagination to see how all of these could lead to disaster. But we know that the progressive Left never met any power they didn’t like. I am not alone in thinking that the government doesn’t need any more “power” to be added to their already enormous arsenal that they already have. Big Tech also helps to “feed” the propaganda of the Left by censoring and only allowing the Leftist party line to be promoted on social media, technology, and the traditional media.

Cancel Culture is already in full force these days as conservatives and those holding biblical values are alienated from the national conversation in some places. If one does not spout “inclusive” and “progressively approved” language they are cancelled from endorsements, jobs, education, and anything else they can be “cancelled” from as punishment. This type of Nazi behavior is repulsive and has no place in modern America. We are still a nation that overwhelmingly desires and demands freedom of speech and expression.

As we see the continued advancement to a “Big Brother” type of governmental environment this fits well with what the Bible tells us about the coming One World Government that the “Antichrist” will ultimately control. There can be no dissent and those who don’t follow the approved narrative need to be “re-programmed” until they comply. The tyrants of Big Tech will help to foster this One World Government in making it so the world economic system is in place to control all “buying and selling” before the Antichrist implements his “mark” of worship. The Bible tells us:

Revelation 13:16-18 — And he causeth all, both small and great, rich and poor, free and bond, to receive a mark in their right hand, or in their foreheads: And that no man might buy or sell, save he that had the mark, or the name of the beast, or the number of his name. Here is wisdom. Let him that hath understanding count the number of the beast: for it is the number of a man; and his number [is] Six hundred threescore [and] six.

I think what we are seeing today is very interesting in that the political aspects must be in place so that America will eventually cave into the globalist demands and the true One World Government can before formed. The Biden administration has shown in only a week and a half on the job that they are hell-bent on destroying America as we know it. Once the political frameworks are in place, then they can apply the economic framework for the Antichrist which is pretty much developed as we’ve seen over the years in the Big Tech, social media, and the mainstream media activities. All they need are the right “crisis” to help put in action the “power grabs” to enslave the people. They just need the “man with a plan” who steps up when it is time.

For believers, we do not need to worry about the coming Antichrist as the Bible promises us that we will be spared the horrors of the coming Tribulation period. While on this side of the rapture of the church, while we may see increased wickedness, persecution, and trials we can rest assured that we are not destined for the final 7-year Tribulation period where God pours out His wrath on unbelieving Israel and unrepentant sinners. We are also not to fear or fall to a hopeless spirit as Jesus promised that He had overcome the world. So, like the early church, we should rejoice when we are persecuted for His name. The Lord has everything under control and nothing surprises Him. Let us continue to trust his plan for us and continue to work for Him while there is still time.