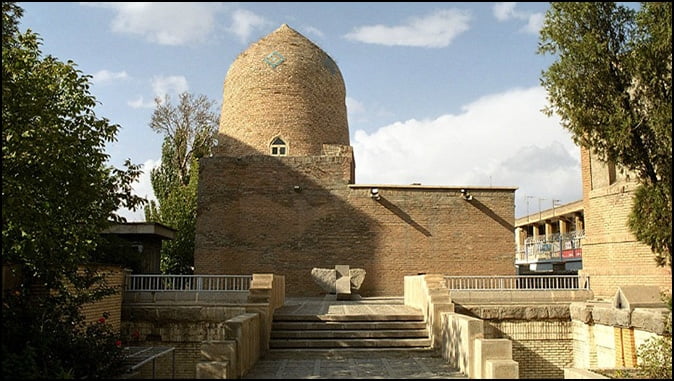 In a sign of mounting tensions in the Middle East region over the Israeli-Palestinian situation it is being reported yesterday by The Algemeiner news website that the ancient Tomb of Esther and Mordechai in Hamadan, Iran was set ablaze. The discovery of the arson incident has Jewish organizations around the world upset at this latest incident of terrorism to Jewish holy sites.
The Algemeiner reported:

Several top US Jewish groups denounced on Friday a reported arson attack at the Tomb of Esther and Mordechai in Hamadan, Iran. The Conference of Presidents of Major American Jewish Organizations said in a statement that it was “outraged” by the incident. “This abhorrent and unconscionable act represents not only a blatantly antisemitic assault on Jews and Judaism, but an assault on all people of faith,” the statement noted. “It must be unequivocally condemned by the international community. The government of Iran must act to prevent further attacks and bring to justice those responsible.”

Anti-Defamation League CEO Jonathan Greenblatt tweeted, “We hope that the authorities bring the perpetrators of this antisemitic act to justice & commit to protecting the holy sites of all religious minorities in Iran.” The Simon Wiesenthal Center said, “Historically, Muslims safeguarded Jewish holy sites from Persia to Morocco, including the Tomb of Esther and Mordechai. But all that has changed under the ayatollahs and the terrorist movements they have spawned.”

“The torching of this Jewish holy site is reminiscent of the Nazis, who not only killed the living, but desecrated the dead,” it added. “The attack took place against the backdrop of the mullahocracy’s drumbeat of genocidal hatred against the Jewish people, its state-sponsored policy of Holocaust denial and denigration. In such an environment a violent attack against Jews, Judaism and Jewish heritage should surprise no one.”

B’nai B’rith International said, “There is a direct path from Tehran’s sinister embrace of antisemitism to the desecration of this important religious site. We call for an investigation by the United Nations into the desecration of the tomb. Ahmed Shaheed, the UN special rapporteur on freedom of religion or belief, authored a report on antisemitism in the fall and is familiar with Iran’s deeply entrenched antisemitism. We ask that he pursue this matter with great urgency. The international community must pressure Iran to protect Jewish holy sites.”

Elan Carr — the US special envoy for monitoring and combating antisemitism — said, “Iran’s regime is the world’s chief state sponsor of antisemitism. It must stop incitement and protect its Jewish community and other minorities.”

I read in another news report through the Jerusalem Post that:

The Alliance for Rights of All Minorities (ARAM) in Iran tweeted on Sunday that, “according to covering reports, members of the Iranian Basij attempted to raid the historic [tomb of Esther and Mordechai] site yesterday in an act of revenge against the [Israeli-Palestinian] peace plan by US President Donald Trump.”

ARAM noted that “Iranian authorities are threatening to destroy the historic tomb of Ester and Mordechai in Hamadan and convert the site to a consular office for Palestine.” The Post could not confirm the “covering reports” cited by ARAM.

The Iranian Christians News Agency (Mohabat) reported in early February that the Basij issued threats to the tomb. “The Council for the Exploration of Student Mobilization of Hamadan Universities said in a statement to the United States, Israel and the Arab countries in the region that they will turn the tomb into a Palestinian Consulate if any action is taken.”

So, it appears that Iranian regime is currently involved in this situation with the tomb of Esther and Mordechai as a result of the impending plans by Israel to annex the West Bank as well as the implantation of the Trump Peace plan that the so called “Palestinians” have outwardly and consistently rejected. This would seem to be a serious escalation in the situation on the ground. I would not be surprised if it leads to other further incidents of like manner.

If the tomb is indeed burned-down I don’t think it would be the first time this has happened to the resting place of a biblical figures. It seems Iran is striving hard to ratchet up the tensions. I do not see Israel stopping their planned annexation of the West Bank beginning around July 1, 2020. But there could be some collateral damage like this arson incident as a result of the annexation plans.

It will be interesting to see what else comes up between now and July 1, 2020. So far, the Palestinians have rejected the plan and will not meet with the Israelis regarding the peace process. The peace process is currently dead in the water and there does not seem to be any chance of the situation returning to negotiations any time soon. It is also possible that incidents on Israel’s borders with the terrorist groups could increase as we get closer to July. This is definitely a developing story that we need to watch.

I think while most of us are obviously concerned with the ongoing Coronavirus situation that we should also keep an eye on the situation on the ground in the Middle East. The continuing trend of things seemingly tending to converge together in these end times appears to continue on. I think that we can expect to see conflict as a result of the coming annexation of the West Bank. The Islamists will not go quietly that is for sure. Israel has a very small window of opportunity to make a move according to the Trump Peace plan in order to annex the Jewish settlements which is reportedly to be about 30% of the West Bank that is allotted to Israel under the Trump Peace plan. The small window of opportunity is due to the upcoming U.S. elections in November. If Trump were to lose in November, the window of opportunity would definitely close as a Democratic administration will not be favorable to Israel. Israel needs to move and move fast.

There are some reports that King Abdullah 2 of Jordan has already warned of a “major conflict” between Jordan and Israel if the annexation plans go forward. What that will entail remains to be seen. That will be the subject of another Rapture Report this weekend.

Keep watching and keep looking up! These are definitely exciting times to be alive.