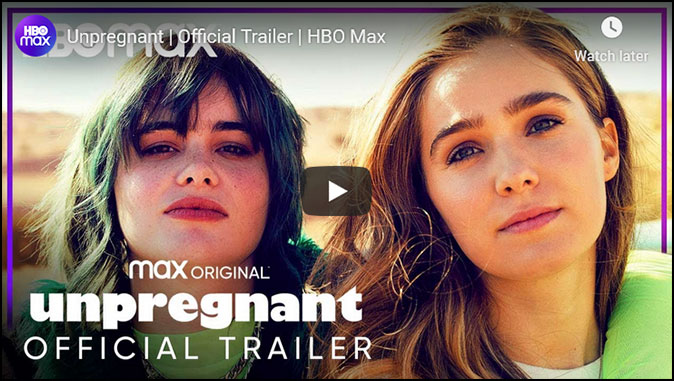 The push for abortion continues across the country as HBO Max is promoting a trailer for a new “comedy” movie titled “Unpregnant” where two friends go across state lines seeking an abortion for one of them without their families’ and boyfriend’s knowledge. This is a movie that would make Planned Parenthood happy.

In reality, the movie is a sick and perverted attempt to spin “comedy” on the serious subject of murdering one’s baby in the womb. This movie is an attempt to put a positive spin on abortion by making it a “comedy” since according to the one film critic’s review that most abortion movies are “bummers”. I guess they need a movie to put abortion in a “positive” light since if you really take time to find out what happens in an abortion there is nothing positive about it.

The Entertainment Weekly has an article about the movie and reports:

The first trailer for HBO Max original film Unpregnant has arrived, showing a humorous take on two teenage girls going on a road trip from Missouri to New Mexico in order to get one of them an abortion without her parents’ and boyfriend’s knowledge. The movie stars Haley Lu Richardson as ambitious 17-year-old Veronica, who gets unexpectedly pregnant, and then recruits estranged friend Bailey (Barbie Ferriera) to drive her in a (stolen) Trans-Am to get the procedure she needs.

As things start to go awry, actors like Giancarlo Esposito show up as well.

The film is directed by Rachel Lee Goldenberg (Valley Girl, A Deadly Adoption), who also wrote the film with the authors of the 2019 novel it’s based on, Jenni Hendriks and Ted Caplan, plus Jennifer Kaytin Robinson and William Parker. It is also the first film to come from Greg Berlanti and Sarah Schechter’s movie deal with Warner Max. The pair served as executive producers on the project alongside Erik Feig of Picturestart.

The disturbing thing about the movie trailer is that it is an attempt to glorify abortion and make it seem like it is okay to travel across state lines to kill your baby. The sacrificing of babies on the altar of convenience continues to play out across the country. I would not be surprised if Planned Parenthood advertising clips showed up in the film’s preview section. It seems that there is never enough blood and body parts to satisfy this satanic organization that operates under the disguise of “women’s health” services.

I’m sure films like this grieve the Lord and it is very sad to watch babies who are made in the image of God to be picked apart and killed while in their mother’s womb. What is supposed to be the safest place for them before birth has become a modern-day torture and killing chamber. It is especially sad that they are targeting teenagers with this movie as well.

The Bible predicts that with the arrival of the end times that mankind’s hearts would become colder, without love, and continuously evil. The movie is a prime example of this and the continuing promotion of satanic hatred towards mankind. The devil has been out to destroy mankind since the garden of Eden and sadly he has been doing a really good job at it.

It is my hope that people will see things like this and pray for all those babies who are in the womb. It has been said that the womb is one of the most-deadly places for babies these days. With people’s hearts getting colder, becoming lovers of self, ungodly, etc. we are seeing the fulfillment of prophecy regarding the end times. And with that we can see that the judgment of God will not be delayed forever. There will be a day of reckoning for mankind.

When we see these things taking place, we are to look up, for it is a sign that our redemption is drawing nigh.