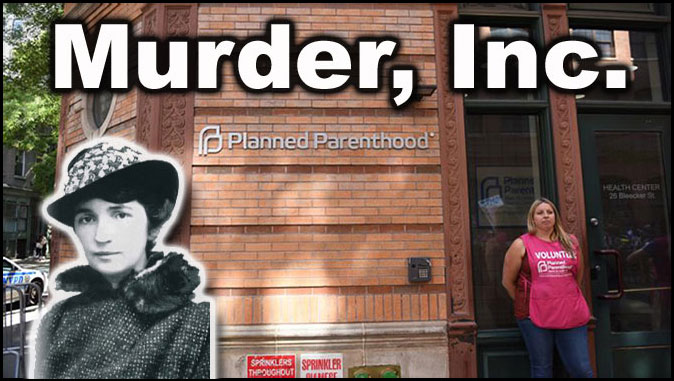 The chickens seem to be coming home to roost for the Greater NY Planned Parenthood as the organization has decided to remove the name of Margaret Sanger after it has become more widespread knowledge that her racist and eugenics past has come to the forefront in the organization’s abortion practices. Margaret Sanger was a was a “racist eugenicist whose goal was to use contraception and sterilization programs to reduce the population of races and ethnicities she deemed inferior.”

Pro-life and conservative groups have been saying this for years, however, with the recent focus on the “black lives matter” groups it has finally started to gain traction.

Planned Parenthood says it is scrubbing the name of its eugenicist founder Margaret Sanger from its high-volume Manhattan abortion center in the wake of a scandal over employees’ allegations that the abortion giant is racist. Planned Parenthood of Greater New York announced Tuesday that it is removing Sanger’s name from its flagship Bleecker Street abortion center because of her “harmful connections to the eugenics movement,” The New York Times reported.

Planned Parenthood is also talking to the city about removing Sanger’s name from over a 20-year-old street sign that hangs near its Bleecker Street office, the newspaper noted.

“The removal of Margaret Sanger’s name from our building is both a necessary and overdue step to reckon with our legacy and acknowledge Planned Parenthood’s contributions to historical reproductive harm within communities of color,” Karen Seltzer, the chair of the New York affiliate’s board, said in a statement.

The Margaret Sanger Planned Parenthood abortion facility, which will now be called the Manhattan Health Center, “is known for causing a large number of life-threatening medical emergencies that required ambulance transport to a local hospital,” according to Operation Rescue.

The Planned Parenthood Federation of America, which has defended Sanger in the past, said in a statement that it supported the New York chapter’s decision to strike her name from the abortion center, the Times reported. The pro-life movement has been pointing out for years that Sanger was a racist eugenicist whose goal was to use contraception and sterilization programs to reduce the population of races and ethnicities she deemed inferior.

Notably, a pro-life black woman told attendees at a Black Lives Matters rally that Planned Parenthood is the “number one killer of the black population” and asked: “Why don’t I see my brothers and my sisters outside Planned Parenthood?”

According to Students for Life Action’s “Strike Out Sanger” Campaign: “Seventy-nine percent of today’s Planned Parenthood facilities are located in minority and low-income areas; 20 million black babies have been aborted since the tragic Roe v. Wade decision; black babies in New York City are more likely to be aborted than born alive; and according to the CDC, nearly 36 percent of all abortions were committed on black babies despite the fact that African-Americans only make up 13 percent of the total population.”

It is sad that the organization is just now admitting what has been known for nearly 50 years. That the founder of the Planned Parenthood movement was nothing more than a female version of Adolf Hitler who wanted to get rid of all the “undesirables” in society by any means necessary.

The Bible speaks of the end times as being a time of unrivaled evil and it is just about impossible to find anything worse than the 60 million babies aborted in the USA since the passing of Roe vs. Wade in 1973 that legalized abortions. We have a supposedly conservative majority SCOTUS that has amazingly upheld women’s “rights” to kill their babies. This is definitely another sign of the end times as people evil will abound and wickedness will run wild. The natural affections of many will grow cold.

Please pray for the unborn babies and that their mothers are reached in time to stop the abortion. Please pray that those on the front lines protesting abortion clinics are successful in reaching these mothers before it is too late.

The rise and increase of abortion is just another sign that God will have to punish this country for her sins. Of which abortion is one of the worst sins. I know if grieves the Lord that mankind would stoop to the level to allow abortions to be legal in a country like America which has been blessed in so many ways. The Lord’s patience will only go so far and then He will judge us for our sins. The coming Tribulation period I would imagine will be a time when the Lord pours out his wrath on unrepentant sinners for failing to turn from their sins. But before the Tribulation period will come, the church will be removed form the time and place of the coming wrath and judgment of God. Please pray for the unborn babies and their mothers.

As we see the increasing signs of lawlessness and blatant sin being promoted as good, keep looking up for the Bible tells us that when we see the converging of all these end times signs, that our redemption is drawing nigh.