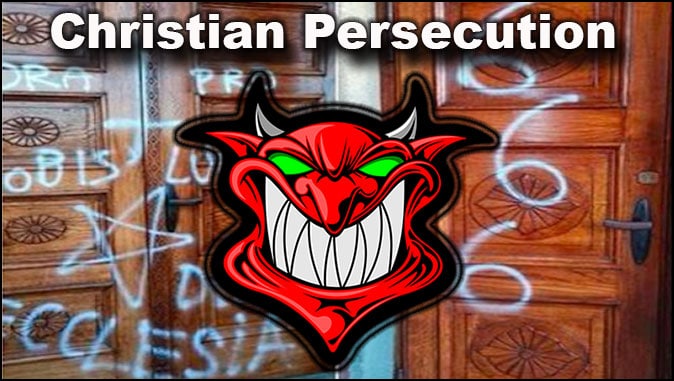 A disturbing report comes out of Europe whereby a Polish church was attacked by vandals and graffiti was written on the church doors. You can see the graffiti in the photo at the top of this page. In this case it was satanic words, symbols, and numbers. The sad fact is that the world is getting more and more hostile to Christians just like the Bible said it would be in the end times.

Breitbart has an article detailing the situation and reports:

Unidentified vandals desecrated a Christian church in Goleszów, southern Poland, last weekend, painting Satanic symbols on the main doors of the building. Using white spray paint, the perpetrators wrote the words “Ora pro nobis, Lucifer,” Latin for “Pray for us, Lucifer,” around an inverted Christian cross, along with the Latin words for the Church of the devil. The criminals also painted a pentagram and the number 666, which refers to the number of the “beast” in the biblical book of Revelation, interpreted by some to be the anti-Christ. The incident took place on Saturday night and the profanation was discovered Sunday morning when the sacristan arrived to prepare for Sunday Mass.

Christian sites across Europe suffered a record number of attacks in the year 2019, with some 3,000 churches, schools, cemeteries, and monuments vandalized, looted, desecrated, or defaced.

In its 2019 report, the Observatory on Intolerance and Discrimination Against Christians in Europe (OIDACE) chronicled the increase in Christian persecution throughout Europe, pointing to “a rise in the number of churches, Christian symbols, and cemeteries across Europe being vandalized, desecrated, and burned, compared to previous years.” Moreover, the report states, across Europe, “Christians have been fired, sued, and even arrested for exercising their freedom of expression or conscience.”

“As we have noted in the past, Christians in Europe are not simply experiencing social discrimination, prejudice, or restrictions on freedom. Christians, including clergy, have been attacked or killed for their faith,” the report stated. The report also cited the official annual crime statistics for 2018 provided by the French Interior Ministry, which included 1063 “anti-Christian acts” and showed that in the ten-year period from 2008 to 2018, there was an increase of some 250 percent in attacks on Christian sites.

It’s sad that vandals and Satanists have decided to attack Christians and churches. I do not recall seeing vandals attaching and spraying graffiti on mosques, lodges, Buddhist temples, or any other similar religious houses of worship. The truth is the only religious places that get attacked regularly are churches and synagogues. One might stop and think that was odd, but the reality is that it is not considering who is behind the attacks. Satan has his minions attack churches and synagogues because they are the “people of the Book” and Satan wants to persecute Christians and Jews. Satan doesn’t care about the other religions because they all are lost and headed to Hell.

While Jews do not typically believe in Jesus Christ as their Savior, the Jews are responsible for bring the world the Bible. Satan also wishes to try to destroy the Jews so that he can cause Bible prophecy not to be fulfilled which he thinks will help his cause. But the reality is he is a defeated foe and was defeated once and for all at the Cross. Christians are a huge target for Satan as he does not want Christians to promote the Gospel of Jesus Christ while there is still time.

Christians and Jews are facing an increased level of attack over the last decade. Satan knows his time is short and that he is very close to being thrown into the lake of fire. So, he appears to be trying to pull out all the stops to delay his ultimate destiny.

It is my prayer and hope that Christians and Jews will stand together against the increased anti-Christian and anti-semitic forces that are building in these last days. It is also my hope the Jewish people will come to faith in the Lord Jesus Christ while there is still time.

Increased anti-semitism and anti-Christian sentiment is just one more sign that we are in the end times and that we are getting closer and closer to the rapture of the church. I hope and pray that the church stays strong and that we are able to continue to plants seeds and reap a spiritual harvest before the Lord calls us up to him in the rapture.

Keep looking up, for when you see these things comes to pass, our redemption is drawing nigh.