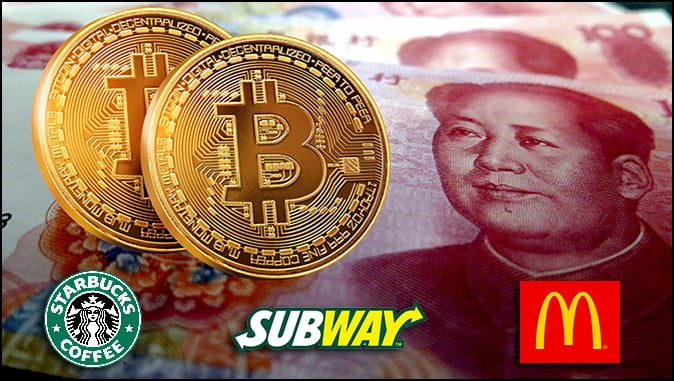 With the world currently preoccupied with the growing COVID-19 virus situation, China has been busy working on their new digital currency program. In a move that is sure to up the stakes in the global digital currency race it is being reported that China is launching a test drive of its digital payment system in four select cities in the country.

According to an article by Forbes:

China, the country that banned initial coin offerings and made it tough for Bitcoin to operate has been tossing around the idea to build its own digital currency, and some U.S. multinationals are reportedly willing to help roll it out, the South China Morning Post reported today. Starbucks, McDonald’s and Subway chains in China were named on the People’s Bank of China’s list of firms that will test the national digital currency in the near future.

A digital currency is a generic term that may or may not be a cryptocurrency. Cryptos are decentralized by design, and also used for their privacy — something that is anathema to the Chinese government. This particular currency, once referred to as a digital yuan, will also be given a test at Chinese hotels, convenience stores, a bakery, a bookstore and a gym in the Xiong’an New Area, a city being built south of Beijing.

No date for the release has been set.

There is also a current article at Fortune that describes the current situation regarding the digital currency race and how it could play out after the world comes out of isolation from the COVID-19 crisis. It explains why it is important for the United States to get busy with the development of a digital dollar if we want to maintain the greenback’s dominance in the world economy.

Here’s what article goes on to say:

Eventually, when the coronavirus crisis ends, a vital question will hang over the world financial system: What comes next?

As with the 2008 financial crisis, a domino effect will expose flaws in the system. As panicked markets prompt central banks to deliver unprecedented monetary stimulus, a vicious cycle of competing currency depreciations will ensue, benefiting some economies’ exporters and hurting others. So, when countries emerge from their COVID-19 lockdowns desperate to revive local industries, expect severe strains on trade relations to arise.

And as with 2008, these tensions will spur demand for changes to the international financial architecture and will test confidence in the dollar’s role as the global reserve currency. Other currency issuers—both governments and a new breed of nonstate currency providers—will move to fill that breach. They’ll seek to wrest away much of the greenback’s immense dominance of international trade and finance transactions.

In this increasingly multipolar financial system, the digitization of currency will be perhaps the most important factor in an economy’s success. As of now, China is winning the digital currency battle by a long shot—and if the U.S. doesn’t catch up soon, it’s going to lose the war.

Many Americans got their first exposure to the idea of a sovereign digital currency when congressional lawmakers surprisingly included a digital dollar solution for distributing federal handouts in initial versions of COVID-19 support legislation. But significant progress in this field had occurred well before then.

Digital currency researchers at more than 50 central banks, as well as numerous decentralized and corporate cryptocurrency projects, are competing to define a new era of programmable money. The Federal Reserve is starting far back in that field. Sitting in pole position is the People’s Bank of China, which has been working on a digital currency for over five years.

The transformative power of a centrally managed Chinese digital currency, officially dubbed the Digital Currency Electronic Payment (DCEP), stems from a key design feature it has in common with Bitcoin, a decentralized cryptocurrency with which it otherwise shares little. Like Bitcoin, and along with other cryptocurrencies and “stablecoins” such as Facebook’s Libra, DCEP is a digital bearer instrument.

As with an exchange of banknotes—the most common physical bearer instrument—both parties to a digital currency transaction recognize final settlement as soon as possession changes. With all other cashless payments, whether by card, wire, check, or digital app such as Venmo, the deal isn’t fully settled—meaning it could still be reversed—until their banks have recorded, reconciled, and settled their respective debits and credits.

As we can see the race to develop the first central bank digital currency will put the successful country in prime position in the world economy.

The Fortune article went on to further highlight an example of the kind of advantage China could employ with their digital currency with the following hypothetical situation was mentioned:

And for non-Chinese businesses unwilling to accept a currency from a nation whose courts they don’t trust, their own countries’ moves toward programmable currencies point to a low-risk, dollarless workaround. In the future, a foreign importer and a Chinese exporter could mutually instruct computers in a blockchain network to place a renminbi-denominated payment into a kind of digital lockbox that neither party can open. If the goods are confirmed delivered, the funds would be released to the exporter; if not, they’d be returned to the importer at the original exchange rate. This decentralized escrow system could let foreign businesses strike trade deals without requiring dollars to hedge their exchange rate risk.

A China victory in the digital currency race would have multiple negative effects for the U.S.—and Western capitalism generally. If foreign businesses can bypass America’s gatekeeping banks, Washington will lose its unique power to impose sanctions on other countries. Also, if they no longer face exchange rate risks, foreign central banks won’t need to backstop their currencies with dollar reserves. The resultant drop in demand for U.S. government bonds would result in higher interest rates, not only for the federal government, but for business loans, mortgages, credit cards, and every other form of U.S. borrowing.

I think from reading these articles and analyzing the information that it is clear that China is slowly but surely becoming a global nuisance. From the militarizing of the South China Sea, the COVID-19 crisis, the Belt and Road Initiative, and to the current digital currency race we are seeing the Beijing regime trying to flex their financial muscles and make themselves the major player in the world community. The world surely can’t afford to be at the mercy of the communist party regime in Beijing. We know from previous issues and situations that China is not a reliable and honest partner. You can’t trust China any further than you can throw them.

It is time that the global community wakes up and begins to ask honest questions about the future and direction of the world after the current COVID-19 crisis. If not, communist regimes like the one in Beijing will have succeeded in moving forward their plans for global dominance. We simply can’t let that happen.

I think for students of Bible prophecy we can see that the move towards a digital currency will play a strong role in bringing the world closer towards a global economy that will be ripe for the coming leader known as the Antichrist. A digital currency definitely will help provide a way for the Antichrist to control buying and selling as the Bible predicts. We know that an eventual one world government will come into place during the 7-year Tribulation period. We are seeing all kinds of signs pointing to these kinds of developments. We are seeing increases in earthquakes, pestilence, famines, droughts, etc. that were heralded as signs that time is running out and that Jesus is returning soon. Immorality is running rampant and there seems to be no shame in the world anymore.

We will continue to examine current events under the lens of Bible prophecy. For Bible prophecy is the sure word of God that shows that God is who He says He is and that nothing surprises Him.

Keep looking up for our redemption is drawing nigh!

Written: 7-17-2016 Rapture Forums Staff: Chris For the past two days, the world has watched…