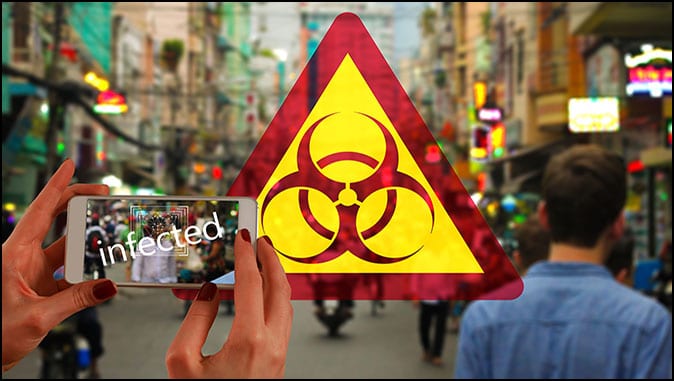 We have been reporting for a while now about China’s move towards a dictator state with the implementation of their social credit scores, numerous cameras monitoring every citizen’s movement, facial recognition tracking, and the list goes on and on. You can now add contact tracing to the list as well as health codes on their smartphones.

The Houston Chronicle is reporting:

All the signs of Beijing’s infernal summer are in evidence. Men playing cards on the sidewalks are sporting their “Beijing bikinis,” their shirts hoisted up over their beer bellies for better air flow, while young trendy types carry personal fans as they walk down the street. People are cooking meat at outdoor restaurants or on little grills on the sidewalk. It’s so hot that Beijingers – usually insistent on body-temperature beverages – are even drinking their beer cold. It could almost be any other steamy July in any other year. But even here, where life is almost back to normal after months of strict controls, the coronavirus remains a lingering menace, lurking behind the quotidian veneer.

Restaurants and malls are open, but to enter, customers have to activate a health code on their smartphones. The code tracks their movements and determines whether they have been to any risky places. Only those with green codes are allowed in. Many offices insist on green codes, too. A red code, or even an amber one, is the scarlet letter of 2020. You can have concerns about privacy, or you can have a functioning life. You can’t have both.

Security guards with temperature guns man the gates at supermarkets and residential compounds, pointing them at the wrists of every person who wants to enter. This is largely a formality, as the reading often does not reflect reality. This reporter has recorded temperatures in the low 80s on several occasions, yet was alive enough to walk through the gate. Gyms are open, but only if they are above ground. Movie theaters on Monday turned the lights back on, but at 30 percent capacity and with no eating or drinking allowed. Beijing’s main tourist attractions, such as the Forbidden City, require advance reservations, and masks are compulsory. They also are mandatory on public transport and in taxis.

As countries around the world try to find the balance between health and economic considerations to deal with a second or third – or in the case of the United States, first – wave of the coronavirus, China has found its sweet spot. These controls involve immediate lockdowns, mass testing and the use of surveillance technology to a degree that the ruling Communist Party could have only dreamed about when this year dawned.

When a cluster erupted around the Xinfadi food market in Beijing last month, municipal authorities confined 75,000 people to their homes and tested 11 million residents in the space of a few weeks. When traces of the virus were linked to salmon imported from Norway, they even tried to swab the throats of the fish (although it is not clear that salmon have throats).

That aside, the efforts worked. One month later, the capital has gone back to its semblance of normality. “I think China has done pretty well in coping with the pandemic,” said Li Yue, who lives near Beijing’s historic drum and bell towers and was taking a break from the heat in the square on Monday. The area would usually be teeming with tourists, but with the towers closed and international tourists shut out of China, it felt like any other neighborhood in the rabbit warren of hutongs, or alleys.

“Life has returned to 70 percent to 80 percent normal,” Li said. The only thing he is not able to do yet is go to the movie theater, he added, although that is changing this week. Chinese President Xi Jinping has declared “victory” over the virus, but authorities remain combat-ready.

I think in a lot of ways the things being implemented in China are a sign of things to come elsewhere in the world, especially in light of Bible prophecy and the coming Mark of the Beast whereby people can’t buy or sell without the mark. China seems to me to be moving faster than other countries towards these emerging technologies that allow governments to monitor its citizens. We can even see things like contact tracing being implemented across the world. One of the main reasons that I think China is moving faster towards these things is because of the power that the communist regime in Beijing wants to have on its people.

It is in my opinion that it will only be a matter of time before these things are widespread across the world including the U.S now that we are in our “second wave” of COVID-19 and some states are shutting back down. And to keep in mind, these are the things they are telling us, what about all the things they are NOT telling us about?

China has been in the news a lot and just two days ago the China embassy in Houston was ordered closed due to concerns about spying and other criminal activities. It is very clear that the U.S. needs to separate itself from China. China’s global superpower ambitions are very concerning along with their lack of human rights and transparency in how they operate. We are long overdue for a reset with China. I really believe we need to move manufacturing and pharmaceutical development back to the U.S. We can’t be held hostage to Beijing. Unfortunately, many of our presidents in the past have catered to China and we are only now realizing the damage this is causing.

I believe that the current “coin shortage” that many businesses are telling customers about is a prelude to getting rid of cash. This plays into the “can’t but or sell without the mark” when businesses opt to go to credit only payments and refuse to take cash. The fact that all of this is happening during the COVID-19 situation just seems to me to be the next step the world will take towards the coming One World Government of the Antichrist. It is amazing how fast all of this is falling into place. All they needed was one good “crisis” to make it all come together. The new normal will be anything but normal in the traditional sense.