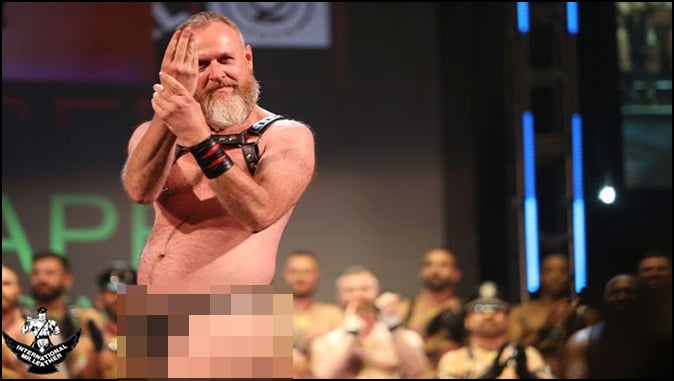 The Rapture Report – BEWARE: The Sodomites Are Taking Over Your Children’s Schools and Libraries!
By Chris Schang

As I was looking for a topic to do on this edition of the Rapture Report, I was increasingly drawn back to an article that I re-posted within the past week. The article was posted by the pro-family organization called MassResistance.

The article that I am referring to is the one regarding an Austin, Texas elementary school librarian being a BDSM “Leatherman” by night and inviting a “Drag Queen” to read to the schoolchildren. The article is another sign and evidence that the LGBTQ folks are purposefully targeting our young children, even as young as elementary schoolchildren, to push and promote their degenerate activities and lifestyles. We all know from the numerous news reports that “Drag Queen Story Hour” is one of the latest crazes taking shape across America as the sodomites and left-wing groups go about with their perverted sexual agendas. They are especially targeting public schools and public libraries.

For those who are wondering, the picture at the top of this article is that of the librarian in question at the Blackshear Elementary School in Austin, Texas. I can recall for as long as I can remember that people in certain positions of authority (teachers, school workers, police, doctors, government employees, etc.) were to be of good moral standing in order to work in their fields. Many people are subjected to “background” checks as a condition of employment. It seems the more we read about situations like this that we see that “good moral character” is being increasingly tossed out the window. It would have been absolutely scandalous had someone tried to bring in a “Drag Queen” to read to kids when I was growing up. The truth is that many parents do not know what is going on in their “public schools” and sadly some just don’t care. My times have changed and not for the better.

The Blackshear Elementary School is a “magnet” public school in in Austin, Texas, that describes itself as a “fine arts academy.” Last year, our Texas MassResistance Director, Tracy Shannon, received a disturbing tip from a local parent. The Blackshear Elementary School had invited an Austin-area Drag Queen, David Lee Richardson, aka “Miss Kitty Litter,” to read to the children in the school library. Two months earlier, MassResistance had exposed “Miss Kitty Litter” as a convicted male prostitute. “Miss Kitty Litter” had been doing “Drag Queen Story Hour” events in the Austin Public Library system. Tracy even held a press conference at the Austin City Hall about the MassResistance exposé.

How did a “Drag Queen” who is a convicted prostitute also get into the Blackshear Elementary School? What is going on? Was there a background check? As Tracy continued to uncover more, Arthur Schaper of MassResistance filed a Freedom of Information Act (FOIA) request with the Austin Independent School District for all materials regarding that incident, including the people who invited “Miss Kitty Litter” to the school. What we found out was shocking!

The FOIA request yielded quite a bit of information. We discovered that Roger Grape, the school librarian for the past seven years (who calls himself the “Guybrarian”) was the person behind inviting Miss Kitty Litter to the library. We also learned that Grape knew that Miss Kitty Litter had a criminal record – and he knew that MassResistance had exposed it. But he still wanted to take every step possible to get him into the children’s library anyway. (He also attempted to invite additional Drag Queen performers to read to the children, according to the FOIA material.)

The “Drag Queen” library reading was done during what is called the “LGBTQ+ Pride Week” at the elementary school. The fact that this sort of degenerate behavior and activities are being promoted in the Austin, Texas School District is appalling. It appears that the school district doesn’t have any problem with schoolchildren being exposed to LGBTQ+ Pride events. I mean, what does a parent say to a child when they ask what LGBTQ stands for? What does a parent say when the child asks what LGBTQ+ folks do? I can’t even comprehend a parent having to sit down with their child and have that discussion. Quite frankly, I don’t even know if the parents or school people even tell the youngsters what LGBTQ+ is all about. And for the LGBTQ+ promoters, they may not even care because they are trying hard to promote and normalize these degenerate sexual lifestyles. This is really sad. Little children have no business being exposed to sexually deviant and perverted adults. Not in the library and not in the classroom. Not anywhere!

The MassResistance article went on to further report on the “librarian” at Blackshear Elementary School:

As their website says, “… we welcome men who are interested in leather, rubber, uniform, sport, and all gear fetish to gather with us and connect with others.”

And just what do they mean by “gear”? Here’s what the website says: *See image at MassResistance website*

Roger Grape is a major figure in the group. Here’s how the website describes him: *See image at the MassREsistance website*

Most people don’t realize that this general problem has been in schools across the country for a long time. And it is far worse than anyone imagines. Over the past few decades MassResistance (along with other groups) has exposed enormous amounts of graphic and explicit LGBT programs, assemblies, course material, and library books targeting schoolchildren as young as Kindergarten age. As much as this horrifies and outrages parents, they soon discover that teachers and administrators support it and have no problem at all with it. In fact, parents who even criticize it are usually met with disdain, hostility, and methodical intimidation. From top to bottom, schools have attracted a frightening generation of employees. MassResistance will continue to help parents confront this.

I am not going to re-post the images from the MassResistance.org website due to their deviant sexual and graphic content, but if you would like to see the type of people being hired to work around your schoolchildren, then going to the MassResistance website will be very “eye opening” to say the least.

There is a troubling trend of pushing the LGBTQ+ lifestyles across America and which has been going on for a long time as noted by MassResistance and other pro-family organizations. One of the things that angers me the most which causes me to report these things is that it appears that school administrators and school employees do not seem to have any problem with this. A lot of liberal school districts think nothing of having LGBTQ+ people coming in and promoting their lifestyles to the little children. These people see nothing wrong with LGBTQ+ folks coming in and causing confusion in the eyes of the children. I can tell that some of these children it just flies over their heads, but for others it sends a message of confusion and disorientation to them as they begin to question why a man is wearing a dress, wearing makeup, and reading stories to them. This is just completely insane. But it is a sad sign of the degenerate behavior that is becoming the norm across America. Sadly, the little children are being offered by school districts and school administrators as living sacrifices to the gods of sexual perversion on the altar of political correctness all across the country. It happens in the schools and it happens in the public libraries.

I read one time that those bent on trying to shape future generations were most likely to try to reach the youngest members of society in order to influence them. Whether that is socialism, communism, sexual perversions, abortions, or some other devious cause it is very true that the youngest schoolchildren have become targets of the satanic elements of our society. We need to be active participants in our children’s lives, because if we aren’t the influence in their lives, the LGBTQ+ folks will be more than happy to take our place and be that influence.

We can not expect things to change if we do nothing. School districts and school administrators need to hear your voices in order to stop this insanity. The amount of moral corruption being promoted in public schools and public libraries around the country is just breath-taking. There seems to be no end in sight. As long as good people do nothing, it will just get worse. I encourage people to contact their public schools and public libraries and inquire about what is going on there. You may be unpleasantly surprised. But it is necessary as our children’s futures are at stake.

Some people call us “haters” for speaking up and out against LGBTQ+ lifestyles. They will use words like bigots, transphobes, homophobes, etc. in order to try to silence us. The truth is that we do not hate anyone. It is out sincere desire to see all people repent of their sins and come to the loving and saving grace of the Lord Jesus Christ. Sin is sin. The Bible tells us that we are all guilty and that there are none that are good in the eyes of the Lord. Our sins separate us from God. Jesus Christ willingly paid the sin debt that none of us could pay ourselves so we could be reunited with God. Jesus Christ’s work on the Cross, His death, burial, and resurrection make it possible for those who believe in Him to be saved. We can’t earn our way to Heaven. Our “good works” are nothing but “filthy rags” in the site of the Lord. We want people to see the error of their ways and come to faith in Jesus Christ.

The Bible tells us that when we see these things come to pass, to lift up our heads and look up, for our redemption is drawing nigh!