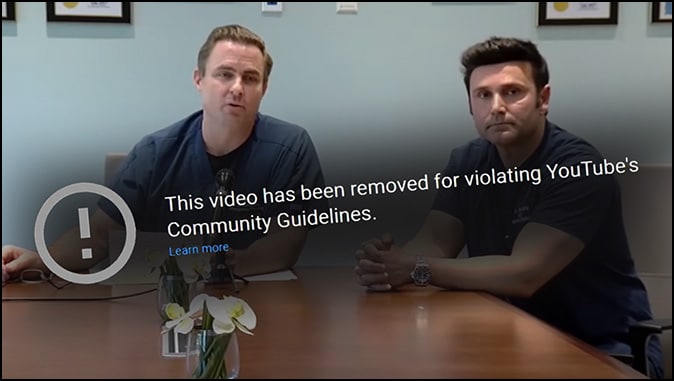 YouTube, a subsidiary of the technology giant Google, has abused its immense power as the world’s largest video hosting website by censoring opinions criticizing the continuation of strict stay-at-home government mandates in response to the coronavirus pandemic. YouTube removed a video of a TV news conference held by two experienced California doctors, Dan Erickson and Artin Massihi, that YouTube claimed violated its “community guidelines.” We have a serious free speech problem here. An information technology monopoly, which has received legal exemption from traditional publisher liability in exchange for providing a forum free of political censorship, is censoring viewpoints contrary to official state government proclamations.

The two doctors censored by YouTube, who are based in Bakersfield, California, are co-owners of Accelerated Urgent Care. Doctors Erickson and Massihi are no lightweights looking for their 15 minutes of fame. They have years of experience dealing with viruses and respiratory infections. They referred in their press conference to tests they conducted of over 5,200 patients within Kern County for the coronavirus, as evidence that it was time to loosen the state’s shelter in place restrictions and allow people to start going back to work. “If you’re going to dance on someone’s constitutional rights you better have a good reason, you better have a really good reason, not just a theory,” Dr. Erickson, a former emergency-room physician, said. “The data is showing us it’s time to lift (the stay-at-home orders) so if we don’t lift, what is the reason?”

The doctors’ news conference was held on April 22nd. Kern County public health officials held their own press conference on April 23rd strongly objecting to the doctors’ message. Kern County Public Health Services Spokeswoman Michelle Corson said, “When the Governor gives the order to start moving back to opening that is when we will start providing you with information with how to do that safely.” On April 27th, YouTube decided to remove the video presenting the contrary assessment by Doctors Erickson and Massihi that it was now time to start moving back to re-opening. YouTube denied the vast majority of its two billion plus users around the world the opportunity to hear what the doctors had to say and evaluate for themselves. Fortunately the video had already reached more than 5 million views before it was taken down.

In a statement rationalizing its decision, YouTube said that the content it flagged for removal “explicitly disputes the efficacy of local healthy authority recommended guidance on social distancing that may lead others to act against that guidance.” YouTube did not claim that its reason for removing the doctors’ video was that it incited violent protests of the state guidelines or even civil disobedience. Nor did YouTube claim that the video violated any law or contained hateful, pornographic or violent content. Instead, YouTube decided to insert itself as an enforcer of government fiat by censoring the mere expression of dissenting views.

YouTube is also acting as the shill for the World Health Organization (WHO).YouTube’s CEO Susan Wojcicki stated during an interview with fake news CNN that “Anything that goes against WHO recommendations would be a violation of our policy and so remove is another really important part of our policy.” The World Health Organization relied on Chinese propaganda at the outset of the coronavirus outbreak in denying that there was any human to human transmission of the virus. Many lives could have been saved if WHO had been more diligent from the outset.Yet Wojcick, a technology marketing executive with no medical training, is willing to censor the opinions of doctors that are contrary to WHO’s faulty recommendations or California state edicts.

Doctors Erickson and Massihi did not say that the initial stay-at-home orders were wrong. They agreed with what Dr. Fauci recommended at the start of the outbreak, given the dire projections at the time. But as more real-life data emerged, the doctors argued that the need for continuing the extreme policies deserved to be re-examined. Good science demands continuing inquiry based on the latest empirical data available, not clinging to outdated models and theories as if they were immutable laws of nature.

The doctors observed that the statewide data in California showed that about 12% of Californians had tested positive for COVID 19, from which they extrapolated a 0.03 chance of dying from the virus in the state of California. “Does that necessitate sheltering in place?” Dr. Erickson asked rhetorically. “Does that necessitate shutting down medical systems? Does that necessitate people being out of work?” He noted significant numbers for the seasonal flu in terms of numbers of cases and the death rate. “We always have between 37,000 and 60,000 deaths in the United States, every single year,” he said. “No pandemic talk. No shelter-in-place. No shutting down businesses.” Although there is a vaccine for the flu, it does not always work and not everyone will take it, Dr. Erickson observed. Unless of course, the government makes the vaccine mandatory for everybody.

Moreover, Dr. Erickson noted that social isolation in response to the coronavirus has brought its own devastating secondary consequences, including increases in child molestation, spousal abuse, alcoholism, and suicides. He also pointed out that hospitals reliant on elective surgeries for revenue have been forced to lay off medical personnel because of the mandatory suspension of such procedures. “We’re essentially setting ourselves up to have minimal staff, and we’re going to have significant disease,” he said. “That’s the wrong combination.”

Finally, Dr. Erickson noted the successful Swedish experience of refusing to shut down its economy or close its schools without the coronavirus raging out of control. He saw Sweden as a model for adopting “a stepwise approach down the ladder to get us back to open up the country.” In that respect, Dr. Erickson and his colleague Dr. Massihi are in accord with the opinion of Dr. Mike Ryan, WHO’s top emergencies expert, but their video was still taken down by YouTube. “What it [Sweden] has done differently is it has very much relied on its relationship with its citizenry and the ability and willingness of its citizens to implement self-distancing and self-regulate,” WHO’s Dr. Ryan said last week. “I think if we are to reach a new normal, Sweden represents a model if we wish to get back to a society in which we don’t have lockdowns.”

YouTube is feeling its oats after having successfully won a favorable ruling from the notoriously liberal 9th Circuit Court of Appeals that it had the right to remove videos it deemed inappropriate for its privately-owned platform. Prager University, a conservative nonprofit organization, had charged YouTube and its parent Google with censorship. The court ruled that despite YouTube’s “ubiquity and its role as a public-facing platform, it remains a private forum, not a public forum subject to judicial scrutiny under the First Amendment.” The 9th Circuit opinion cited a Supreme Court decision holding that simply hosting the speech of others “does not alone transform private entities into state actors subject to First Amendment constraints.” The 9th Circuit judges concluded that since YouTube is not owned, leased, or otherwise controlled by the government, it can enforce its own community guidelines without having to worry about free speech protections applicable to government actions.

However, in this case YouTube is doing more than just acting as a private entity hosting its users’ videos with reasonably defined prohibitions of blatantly dangerous or patently offensive speech. YouTube has stepped over the line by assuming the role of an information filtering system on behalf of the government. YouTube is serving the California government’s interest in blocking from its ubiquitous forum the expression of opinions from two highly experienced medical professionals that dispute the basis for governmental orders that infringe on the liberties of American citizens.

YouTube and its parent company Google already have experience in complying with censorship demands from other governments outside of the United States, including China. YouTube is now using the coronavirus as an excuse to replicate China’s police state tactics of censorship in the United States.