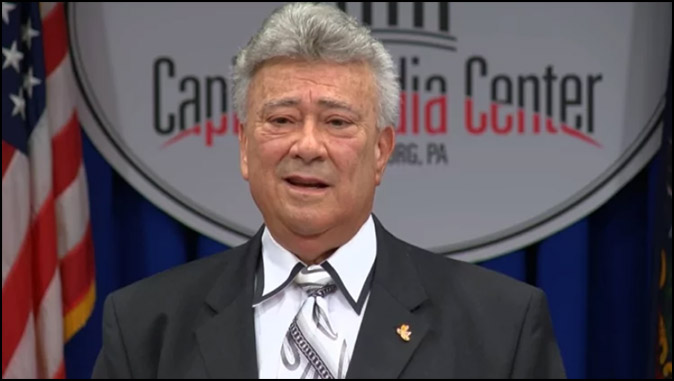 You Think Fetterman Is Bad? Wait Until You See Who ELSE Pennsylvania Elected
When John Fetterman looks like a picture of eloquence and energy by comparison.
By Robert Spencer

Tony DeLuca is not exactly a household name, and he would probably have preferred it that way. Instead of garnering big headlines and moving on to higher office, Tony was just a solid, standup guy, a reliable Democrat, serving in the Pennsylvania State House for a staggering twenty terms. First elected in 1982, Tony gave his all for the people he loved right up until the day he died at the age of 85 on October 9, 2022.On Tuesday, a day short of a month after Tony’s death, the voters of Pennsylvania’s 32nd district showed their gratitude to this selfless public servant for his forty years of service to their community in a unique and memorable way: They elected him to a twenty-first term. You think Senator-elect John Fetterman, who can’t utter a coherent sentence, is bad? Meet Dead State Representative Tony DeLuca.

Tony is unlikely to be in any condition to serve out his next term, but you can’t fault him for trying. At 85, he was barely five years older than our sharp and sprightly alleged president of the United States, and just three years older than outgoing (hooray) House Speaker Nancy Pelosi (D-Grey Goose). Tony was younger than Sens. Dianne Feinstein (D-Cali. SSR), Chuck Grassley (R-Iowa), and Richard Shelby (R-Ala.). Politicians at all levels are clinging to power long into their declining years these days; why should Tony DeLuca have been any different? So Pennsylvania voters couldn’t be faulted for supporting an octogenarian — if you don’t, you’re a white supremacist or an election denier or whatever the term du jour is for our moral superiors.

But there is that little other detail, the one that makes John Fetterman look like a picture of eloquence and energy by comparison. Yes, I’m referring to the inconvenient fact that good old Tony DeLuca is dead. Remember, he died a month before the election. That gave the voters of the 32nd district thirty days to discover that Tony had shuffled off this mortal coil and decide to vote for someone a bit more animated. That also gave the Democrats of Pennsylvania’s 32nd district thirty days to find a candidate who was actually breathing and announce that he or she or xe was taking Tony’s place.

Instead, Tony DeLuca was comfortably reelected. So what happened? Are Pennsylvania voters, or at very least those in the 32nd district, so woefully uninformed that they didn’t even notice that they were pulling the lever for a dead guy? Were they sitting on a folding chair in some hall Tuesday night, waiting uncomfortably for Tony to come out and give his victory speech and wondering where the heck he was? Are the voters who elected the vacant and incoherent John Fetterman really just finding their own level? And since they’re as vacant and incoherent as Fetterman himself, they didn’t realize that Tony DeLuca had somehow changed and just wasn’t saying or doing as much as he used to?

Or did voters in Pennsylvania’s 32nd district know full well that Tony was dead but voted for him anyway, because they knew that even though the local Democrats spent the last month ignoring their very own 800-pound gorilla, the dead candidate in the room, they would eventually get around to replacing him? Are the voters of Pennsylvania’s 32nd district so complacent and indifferent that they trust the local Democrats to pick someone, anyone, who will carry out the Left’s agenda, and they really don’t care who it is? If that’s the case, imagine the embarrassment of these blandly trusting ideologues if the Dems pick someone who doesn’t end up toeing the line in every particular. Of course, that’s unlikely to happen. Being a Leftist these days means falling into line and adopting an unthinking conformism regarding all things, so the good people of the 32nd district can rest easy.

Meanwhile, the reelection of Tony DeLuca puts John Fetterman’s election to the Senate into perspective. No one can now say with any accuracy that Fetterman was the worst candidate on the ballot in 2022, or even the worst in Pennsylvania. Tony also represents, in his present condition, the ideal candidate for the Democrats of our time, even more than Fetterman himself does. What they want is someone like Joe Biden, only more so: someone who will do the bidding of the people who are pulling the strings, without argument or hesitation. John Fetterman is simply not capable of doing anything else, and neither is Tony DeLuca. Hey, the body of the philosopher Jeremy Bentham, who died in 1832, is on permanent display at University College London. Pennsylvania Democrats could work out a similar arrangement for Tony DeLuca, the ideal Democrat state representative.