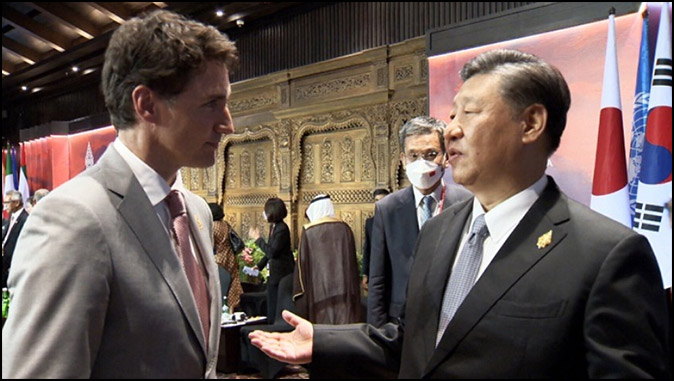 Xi Dresses Down Trudeau
When you get a tongue-lashing from your boss.
By Christine Douglass-Williams

Canada is heavily infiltrated by China, aided by a longtime partnership between the Chinese leadership and Justin Trudeau.

During the G20 meetings, Trudeau, who has been referenced as “little potato” by China, was openly reprimanded by China’s leader Xi Jinping:

Yusheng Wang, 35, an employee of Canada’s largest electricity producer Hydro-Quebec, was arrested at his home south of Montreal by the Royal Canadian Mounted Police (RCMP) on Monday. A special national-security investigations unit of the RCMP charged Wang with stealing trade secrets for China.….

“Foreign actor interference is a priority for many law enforcement and intelligence agencies around the world. Hydro-Quebec is considered a critical infrastructure and a strategic interest to be protected,” the RCMP said in a press release announcing the arrest.

China invests heavily in academic research and development, and along with it comes longstanding concerns about China stealing foreign technologies and trade secrets. A 2020 Bloomberg report asked the question in reference to the Nortel Canada, a one-time world leader in wireless technology that seemed suddenly to disappear: “Did a Chinese Hack Kill Canada’s Greatest Tech Company?” In short, the answer is yes. Hackers breached Nortel’s uppermost ranks and “roughly 800 documents” were sent off to China in an elaborate corruption scandal. Then came the rise of the tech giant Huawei.

On November 1, the Canadian Security Intelligence Service (CSIS) was reported by Global News to be “increasingly concerned” about China’s interference in Canada. Then three days later, the Globe and Mail reported that a CSIS official told a House of Commons committee investigation into foreign interference in elections that “China is the ‘foremost aggressor’ when it comes to foreign interference in Western countries and ‘works within’ their political systems ‘to corrupt’ them.”

Note how Trudeau tries to make a show with Xi by telling him: “In Canada we believe in a free and open and frank dialogue.” “We” does not include Justin Trudeau. This lie is coming from a man who cracked down (Communist style) on the peaceful Freedom Convoy, spreading propaganda about how it was a threat to national security. He also lied that police requested that he invoke Canada’s Emergency Measures Act. His actions were enough to drive an anti-Trudeau kids book, How the Prime Minister Stole Freedom, to the top of Amazon’s best seller list. Trudeau also issued the threat to Canadians that the unvaccinated “must accept consequences” of their decisions. And to make sure he stays in power, he formed an anti-democratic pact with the socialist NDP party, lead by Jagmeet Singh, to make sure that all of his major bills pass in the House of Commons, as well as to prop him up in the event of a no-confidence motion.

Of course, Xi Jinping, of all people will see right through Trudeau’s deceit, as China continues to own Trudeau, infiltrate the public and private sectors of Canada, and expand its Belt and Road initiative.

Chinese leader Xi Jinping was captured by Canadian broadcasters in a rare candid moment on Wednesday, where he was filmed chiding his Canadian counterpart, Prime Minister Justin Trudeau, over what he described as “leaked” discussions.

On the sidelines of the G20 summit in Indonesia, Xi chatted with Trudeau in Mandarin with a smile. But the English translation of what he said was a little less friendly.

“Everything we’ve discussed has been leaked to the papers and that is not appropriate,” Xi’s translator said.

Trudeau nods and Xi spoke again. “And that was not how the conversation was conducted,” the translator said.

“If there was sincerity on your part, than we shall conduct our discussion with an attitude of mutual respect, otherwise there might be unpredictable consequences,” Xi tells the Canadian leader in Mandarin.

Xi’s translator attempts to translate what was said, only getting to “If there was sincerity on your part,” before being cut off by Trudeau.

“In Canada we believe in a free and open and frank dialogue,” Trudeau said, adding “we will continue to work constructively together, but there will be things that we will disagree on.”

“Let’s create the conditions first,” the translator said on behalf of Xi in the video. The Chinese leader then shakes Trudeau’s hand and walked away with his entourage…