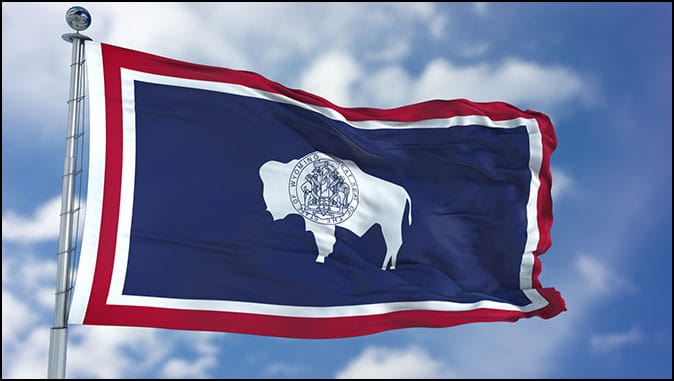 Wyoming County Commission bans all public comment at meetings – to avoid criticism of their pornographic library books for children.
Decision by Commission appears to be result of collusion with Library Director.
County attorney advises to have police at Commission meetings.
MassResistance parents continue to be relentless!
By MassResistance

At the previous Commission meeting (before the testimony ban) this mother shows the Commissioners the federal report on preventing child sexual exploitation – and the local library is part of the problem. But the Commissioners weren’t interested.

The County Commission in Campbell County, Wyoming, has voted to ban all public comments at its meetings. They did not hide their reason: The majority of the Commissioners do not want to hear any more complaints or criticism (from Wyoming MassResistance parents) about the lurid pornographic books in the public library children’s and teen’s sections.

The County Commission oversees the Library Board. There is evidence that this ban on public comments was enacted in collusion with the Library Director.

On October 15, the County Commission chairman issued an announcement that no public comments about the library books would be allowed at the Commission meetings. But then, apparently, the concept of banning a particular type of speech seemed problematic. So at their next meeting, on October 19, the Commission voted 3-2 to ban all public testimony at their meetings. Here is the arrogant announcement they posted after the vote..

Since July, parents in Gillette have been showing up regularly at County Commission meetings to read excerpts from some of the library books in the children’s and teen’s sections and make their outrage clear to the Commission members.

The parents have demanded that the books be removed and that the perverse library staff members who put them there – and the local Library Board that has defended those books – be fired.

Holding signs in front of the library.

When people drove by the local Subway sandwich shop they saw this!

But instead, the County Commission has insisted that the parents go through a formal “challenge” process for each book. That is an insulting sham. The same library employees who brought the books into the library decide on the “challenge.” So far, there have been over 85 formal challenges filed by parents in the community with the library. The challenges have all been denied; not a single book has been removed from the library. (Two books got moved to a different shelf.)

When people think of Wyoming, the word “conservative” comes to mind. The population of Campbell County is certainly conservative overall. But that’s not always reflected in the elected officials. Three of the County Commission members – Chairman Robert Maul, Rusty Bell, and Daniel Reardon – clearly have no problem with these filthy books and are openly contemptuous of those who do. The other two – Colleen Faber and Del Shelstad – hold “normal” values but unfortunately are out-voted on this.

How the comments ban came about

Wyoming MassResistance parents filed various Freedom of Information Act (FOIA) requests for all relevant communication concerning the ban on public comments and the parents’ protests. What they got back was interesting – and shocking. Here are some of the events leading to the Commission’s decision to ban comments:

– July 14. Commissioner Daniel Reardon’s visceral disgust for parents who opposed to the library pushing a transgender agenda on children was reflected in an email he sent to a local supporter. Reardon wrote, “It is a sad state of affairs where we regress back to the Matthew Shepard days because of ignorance and hate.”

– Sept. 22 – Draft of “Joint Statement.” In response to a prior conversation with Chairman Robert Maul, Library Director Terri Leslie gave him a draft for a “joint statement” that would come from the library staff, Library Board, and County Commission on this issue. The statement bemoaned the constant flow of “comments about particular library books” by the public. It absurdly states that “reading is a constitutional right” – meaning that children have the “right” to access homosexual or transgender pornography at the library. It goes on to say that the library’s book challenge procedure is a “democratic process” and a “serious matter” that “requires due diligence and takes time” – and that “community members must be patient.” To our knowledge, that statement was not released.

– Oct. 5. Commissioner Rusty Bell suggested taking this a step further. He emailed Maul suggesting that the County Commission “continue to take public comment on everything except the public library at our public meetings.”

– Oct. 6. Maul said he liked the idea and said he’d have Sean Brown, the Assistant County Attorney, come up with the wording for a formal statement.

– Oct. 8. Sean Brown submitted wording for the statement to Maul.

– Oct. 15. The Library Director was very pleased: The statement was made public and posted on social media. The County administrator emailed Library Director Terri Leslie to let her know of “the decision of the Chairman.” Leslie quickly answered, “Words cannot express how impressed I am with this decision.”

– Oct. 15. Bring in police to control upset parents, says Asst. County Attorney. A member of the local parents’ group emailed the Commission stating, “You are not autocrats, you are not fascists, you are not dictators, you are elected public servants … It is outrageous and reprehensible that you have forced this issue for so long in this community.” Obviously, the parents were not taking this casually and so intimidation was in order. Sean Brown then advised that the Commission should have a police presence at the next meeting. (Taking a cue from the DOJ and FBI?)

– Oct. 16. Brown and Maul decided to eliminate public comment entirely, rather than try and defend the “limited comment” approach. And since they had the votes, they apparently decided to pass an official resolution on that at their next meeting.

– Thus, at their Oct. 19 meeting, the Commission voted 3-2 to eliminate public comment entirely. But that has only increased the outrage on this issue.

Meanwhile, attacks against the parents by pro-LGBT activists (a small but very vocal and nasty group) praised the decision on the county’s Facebook page. They engaged in the usual vicious name-calling. They posted moronic statements, for example: Unless children have free access to the homosexual pornography, girls will get pregnant. But our people were not intimidated, and those comments were answered with a strong rebuttal!

To totally squelch public comment before an elected board is an outrageous and arrogant action, to be sure. However, it is has served to bring out in the open that these three County Commissioners (1) fully approve of making this obscene material available to vulnerable children; (2) think they can insult the public’s intelligence with their phony “book challenge” process; and (3) fully support the demented public employees who choose these books.

This ban is having the opposite effect than was intended. Instead of being intimidated and cowed, the local Wyoming MassResistance parent group has been growing tremendously since the announcement. There will be a lot more to report on this battle!

End of the Republic

End of the Republic With the FBI raid on Trump’s home, America has fallen into…

Karine Jean-Pierre: It Was ‘Unconstitutional’ for Supreme Court to Overturn Roe

Karine Jean-Pierre: It Was ‘Unconstitutional’ for Supreme Court to Overturn Roe Old Joe and his…

Falsely Teaching Our Children That America is Evil