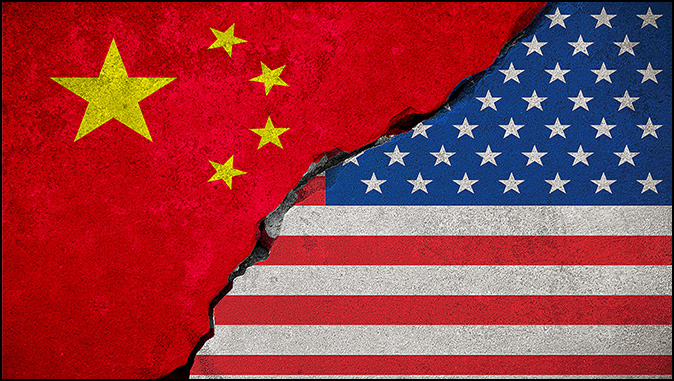 World War III Is Here and It’s an Ongoing Psyop to Break America
The battlefield is our country’s mind and soul.
By Scott S. Powell

The United States is in a world war, and it’s insidious because there is no shooting right now. Under banners such as “the Green New Deal,” the “Great Reset,” “Build Back Better,” and “Social Justice and the Greater Good,” this war is being waged by groups and cabals both within and from outside our borders. In short, we face irregular and unrestricted warfare against the sovereignty of the United States — the world’s oldest constitutional republic that has provided more freedom and opportunity to its citizens than any other government in the history of mankind.

Once you understand the basic facts behind total unrestricted warfare, everything begins to make sense.

Unlike the physical territory and fronts of conventional war, the battlefield of this war is the mind and soul. The goal is to confuse and demoralize Americans through ideological, spiritual, psychological operations (psyops), “lawfare” and a range of other deceptions. Unrecognized by most, this war has been going on during the last century in different forms and from different actors. The primary targets of this war are the American people’s sense of identity and belonging — their family orientation, their faith in God and appreciation for their country. The enemy battle plan revolves around creating division within America in every way: between children and parents, between young and old, between races, between genders, and between heterosexuals and homosexuals. The recent explosion of a transgender movement may be a marker of nearing the end, for no civilization survives when individuals turn upon themselves.

The common thread of those who want to take America down is a secular globalist vision that nullifies the sovereignty of the nation-state. For these elites, the United States and its Constitution stand in their way and is their biggest obstacle.

The first socialist totalitarian globalist regime was the Soviet communist system known as the USSR, established in 1919 by Bolshevik revolutionaries Vladimir Lenin and Leon Trotsky, both of whom who were financed by wealthy capitalist businessmen in London, Frankfurt and New York.

After World War II, the second totalitarian state was established by Mao Zedong in 1949 as the People’s Republic of China (PRC). In 1989, the USSR ended due to the collapse of its socialist economic system and the fifteen Soviet satellite countries, including Ukraine, regained their independence. The Communist Party of China (CCP) then took the baton of global communism, leaving behind a legacy of its bloody cultural revolution and the genocide of some 65 million of its own citizens. Learning from the failure of socialism in the USSR, the CCP adopted a modified market system in the early 1980s. Even though this market system was under control of the CCP, its incentives combined with the entrepreneurial culture in China catalyzed rapid economic growth that lifted a significant portion of the Chinese population out of poverty.

More than any country, China has a unique war-fighting orientation that traces back to fourth century B.C. military philosopher-strategist, Sun Tzu, whose name means “Grand Master.” Chinese military and political decision-makers still embrace Sun Tzu’s admonition to “break the enemy’s resistance without fighting,” and to exploit the normalcy bias by “engaging the enemy with what they expect as it is what they are able to discern and it will confirm their projections…and it will settle them into predicable patterns of response, occupying their minds while you wait for the extraordinary moment—that which they cannot anticipate.”

In the latter 1980s, China announced to the world that they were open for business, offering a huge market for foreign brand products and a low-cost manufacturing platform. The CCP deemed this the best way for their country’s economy to catch up to the developed countries of the world. And so, they created rules of engagement, also known as “lawfare,” that included 51 percent ownership of all joint ventures established in China so as to assure control and guarantee access to technology. Thus, the Chinese gained access to American companies’ patents and designs. Last month the US Chamber of Commerce’s Global IP Center (GIPC) reported that as much as 86 percent of the world’s counterfeit goods originate from China.

While wooing American companies to offshore their manufacturing and assembly to China, the CCP was building and infiltrating channels in the United States at many levels. Those channels included universities and think tanks, social and cultural groups, Chinese-language media, Chinese cultural organizations — such as Confucius Institutes, and WeChat, the Chinese social media and messaging app. Newsweek has identified about 600 Chinese groups operating in the U.S. that are all in regular touch with and guided by the CCP.

Western business leaders and politicians have naively assumed that trade and exchange would liberalize China, while improving their top and bottom lines. However, these assumptions have proven false. Under Xi Jinping’s CCP rule since 2012, a rise of technocratic power and totalitarian control has resulted in:

– increased repression of journalists and all independent religious groups

– deployment of more than 300 million surveillance cameras in China with facial recognition.

– the installation of spyware on all smartphones sold in China

China’s neighbors and trade partners face many threats, but the fall of Taiwan to CCP control would change everything. Taiwan is the largest and most important manufacturer of semiconductor chips upon which the U.S. military and the entire world depend.

The challenge from the CCP comes at a time when there are also rising challenges from consortiums of other globalists, like the World Economic Forum (WEF) and the Bilderbergers — two organizations headquartered in Europe with many members and extensive reach into countries around the world.

It’s no coincidence that the Covid-19 virus originating in China in late 2019 gave birth to one of the largest global psyops in peacetime history. That psyop, which was explicitly designed to promote fear, started with the CCP’s approval to release images of total lockdowns in Wuhan, with apartment entry doors being welded shut and bags of dead or dying pet dogs and cats piled up on sidewalks awaiting pickup and burial.

Klaus Schwab, WEF founder and chairman, built on the Covid fear psyop, stating “the Covid pandemic represents a rare but narrow window of opportunity to reflect, reimagine, and reset our world to create a healthier, more equitable, and more prosperous future.” Among WEF’s eight predictions for the world in 2030, we are told: “You will own nothing. And you will be happy.”

Owning nothing is of course the Chinese communist model of control, and Klaus Schwab has cultivated relationships in China for the last 40 years. In 2017, Schwab commented that “President Xi’s [WEF] attendance and speech were of tremendous historical significance, and they filled us with confidence for the future.” Quoting President Xi’s ideas of “a community with a shared future for mankind” and the “Chinese Dream,” Schwab said that “President Xi’s speech was crucial for building an innovative, open, fair and inclusive society, and that the Chinese Dream is connected with the global dream.”

On December 10, 2018, the CCP awarded Klaus Schwab the China Reform Friendship Medal. Schwab’s response: “…the WEF will continue to work with China to make greater contributions to building a harmonious society and a community with a shared future for mankind featuring peace, prosperity and mutual understanding.”

In 2020, the Covid Pandemic psyop was the critical factor in opening the flood of mail-in ballots and ballot harvesting that helped pave the way for Biden’s election win.

Xi Jinping, the CCP, Klaus Schwab, and the WEF are allies in sharing a similar globalist totalitarian perspective. They see no role for private property and believe all citizens should be controlled through surveillance. In April 2022, Schwab’s lead advisor Yuval Noah Harari cast the WEF vision of “a constant monitoring and total biometric surveillance, under the skin.”

When we overlay the recruitment and infiltration by the WEF and the CCP in American affairs and institutions with the knowledge that we now have of Joe Biden family’s receipt of $31 million in financial payments from the Chinese, we are confronted with an unprecedented national security risk. The compromised position of Biden is the most plausible explanation for his doing nothing about our open border and Chinese fentanyl killing Americans and his recent executive orders changing China policy:

– The February decision to end the U.S. China Initiative designed to protect U.S. national security against Chinese spying and countering national security threats, such as “identifying and prosecuting those engaged in trade secret theft, hacking, and economic espionage,” as well as “protecting our critical infrastructure against external threats through foreign direct investment and supply chain compromises.”

– The July decision by President Biden to sell a million barrels of oil from the United States’ strategic reserve to a Chinese company in which Hunter Biden’s private equity company held a $1.7 billion stake.

In sum, the success in the infiltration and psyops of WEF and the CCP are widespread, but poorly understood. And if the end game arrives, WEF gets squashed like a bug because it’s the CCP who has the guns and the real power.

A course change for America is way overdue. Let’s start by taking a maxim or two out of Sun Tzu’s playbook: get out of denial, study and know the enemy, and use every means to subdue him without bloodshed.