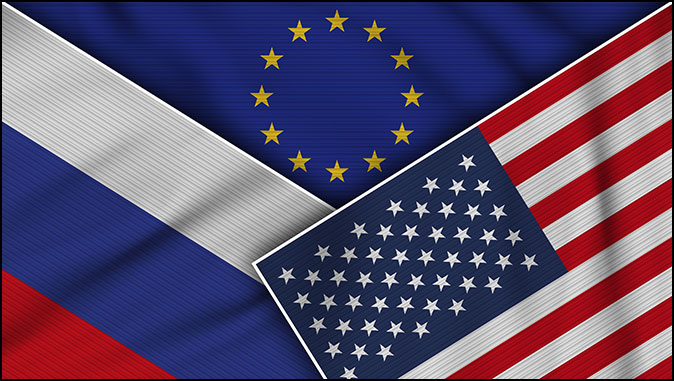 World Order: Back to the Future
By Amir Taheri

In the next few days we will witness a tsunami of diplomatic agitations spanning over Geneva and Brussels as American, Russian and European leaders try to create the impression that they know what is going on and what must be done about it.

The diplomatic marathon is set to start on January 9 with a US-Russia summit, something Russian President Vladimir Putin for weeks has been building up as a major event. It will be followed by a Russia-NATO encounter on January 12, reviving a process that began almost 30 years ago and was abandoned in the last decade. The final bouquet will come with a conference of all member states of the Organization for Security and Cooperation in Europe (OSCE) with memories of the love-fest known as the Helsinki Accords.

The question is what each of the participants expects to gain from an exercise that is manifestly improvised in a rush and lacking a clear agenda.

The Russians say they will be seeking “security guarantees”, whatever that means. The Americans and Europeans talk of “persuading Putin not to invade Ukraine”, knowing that he neither wants nor can do so.

Putin is seeking a return to the power play formed in the 20th century when summit conferences first started with the so-called “Big Five”, that is to say the five permanent members of the United Nations Security Council: the US, Great Britain, France, the Soviet Union and pre-Communist China.

It morphed into the “Big Four” when China was excluded, before becoming the “Big Three” when France, under Charles De Gaulle decided to go “tous azimuts” [all-out]. Next, Great Britain, weakened massively by the loss of empire and economic decline, was pushed aside, leaving the US and the USSR as the “superpower” couple.

It is that “couple” that Putin hopes to bring back.

This is why he is talking of “raising issues of global concern” in a summit with US President Joe Biden who, on the other hand, hopes to cut Russia down to size as a middling power that could cause occasional nuisance but could never be regarded an equal partner in global leadership.

The whispering in Moscow is that Putin will try to tempt Biden with a number of promises.

These include persuading the Islamic Republic in Iran to re-endorse the Obama “nuclear deal”, which President Donald Trump denounced as a sham. Tehran’s acceptance of a new version presented by the US would give Biden his first diplomatic victory.

Putin may be exaggerating his influence with the Tehran mullahs but is certainly in a position to persuade them to tone down their aggressive behavior, something which could help reduce tensions in Iraq, Lebanon and Yemen where the mullahs play perturbation through proxies.

Next, Putin is also offering cooperation in Syria as part of a broader scheme to stabilize the Middle East.

Other promises would include taming Belarussian President Alexander Lukashenko and lowering the flame of conflict in Ukraine.

In exchange, Putin wants the removal of sanctions, a promise not to extend NATO to Ukraine, and to gradually accept the annexation of Crimea and South Ossetia, the virtual occupation of Abkhazia, and Russia’s military presence in Transcaucasia, as so many faits accomplis.

The problem is that Putin’s hope of reverting to the status quo ante, a balance of power that no longer exists, sounds more like a fantasy than a serious strategy. This is no longer a bipolar system in which a US-USSR accord could have an immediate impact on a crisis.

We know how the US persuaded Britain, France and Israel to halt the Suez War with a few telephone calls.

Yevgeny Primakov, the senior Soviet politician who played multiple roles during the Cold War, recalls in his memoirs how he was sent to Cairo in June 1967 to tell Egyptian leader Gamal Abdul-Nasser to accept a ceasefire with Israel. Nasser immediately complied although, as a military man, he must have known that no war is actually won until one side accepts defeat.

In the old world that Putin hopes to revive, the US could count on almost unconditional support from its European, Japanese and other allies. This is no longer the case as even small European powers, not to mention Arab and other Asian allies, try to shape policy options of their own on a case by case basis.

This is why Turkey, still a NATO ally, is gyrating in different directions, while a bunch of European Union members, including Germany, preach leniency in dealing with Moscow.

In the same old world, the USSR could bluff with the claim of influence on Communist China. That, too, is no longer the case. In fact, in next week’s diplomatic marathon, China will be the elephant in the room.

While Putin’s back-to-the-future gambit is aimed at reviving the last century, his Chinese counterpart, President Xi Jinping, takes 19th century imperialism as model for global power projection. Forging a neo-nationalist narrative that reminds us of British jingoism in the heyday of empire-building, Xi speaks of acquiring a blue-water navy and an ultra-modern nuclear arsenal while planning a network of bases, similar to the “coal stations” the British built for their empire, across the globe.

Last week, Chinese Foreign Minister Wang Yi visited the first of those bases in Djibouti, and encouraged musings on acquiring other bases in Eritrea and the Comoros. Beijing has also built numerous “platforms” on South China Sea islands and is working on securing a base in the Solomon Islands in the Pacific.

What Xi may want to ponder is that all those “coal stations” and bases didn’t save the British Empire, while the biggest nuclear arsenal in history didn’t save the USSR from collapse.

For their part the Europeans, their lip-service to EU unity notwithstanding, are back to the 17th century and the Westphalian Treaties with the emphasis on “each for himself”, in some cases reflecting the chauvinist mood in many European societies, dramatically illustrated by Brexit.

What about the US? If the current isolationist mood is as dense as some claim, the US is trying to crawl back to the old times when the Monroe Doctrine shielded it against troubles caused by others.

We may be witnessing what Montaigne called “branler” or jaywalking or dodging all problems without solving any.

With so many players trying to deal with the problems of the 21st century with solutions shaped in 17th, 18th, 19tt and 20th centuries, we are unlikely to witness the emergence of a new world order anytime soon, certainly not through this week’s diplomatic razzmatazz.